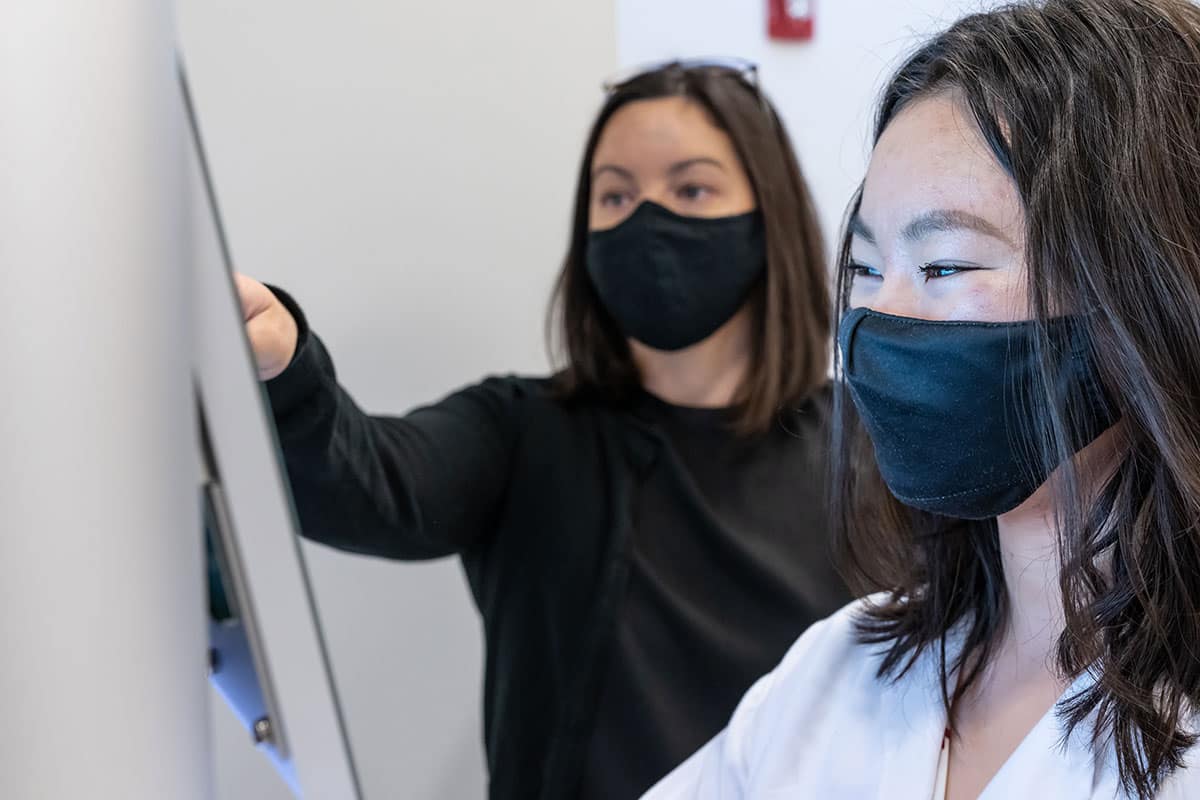 Embry-Riddle Aeronautical University senior Olivia Siu won first place in the undergraduate Brain and Behavior category of the American Association for the Advancement of Science’s (AAAS) annual poster session for her research on how simulated cosmic radiation affects the behavior and cognition of male and female mice. The world’s largest general scientific organization, the AAAS hosted about 180 total student participants in this year’s virtual competition.

“The most surprising thing I learned is that the negative behavioral and cognitive effects of galactic cosmic radiation may depend on sex,” said the Sacramento, California, native, citing previous research that reported a similar finding. “My own results are still being developed but so far agree with this result that males show diminished social interaction, increased anxiety and impaired recognition memory.” 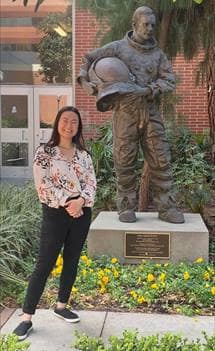 Olivia Siu poses with a statue of Neil Armstrong during a tour of the University of Southern California, where Armstrong earned a master’s in Aerospace Engineering. (Photo: Olivia Siu)

“Next, it’s onto grad school!” Siu said, noting that, so far, she has made it to the final interview rounds for a National Institutes of Health Oxford-Cambridge Ph.D. program, an MIT-Harvard Bioastronautics Ph.D. program and a Psychology Ph.D. at the University of Hawaii. She has also been accepted to the Neuroscience and Film program at the University of Southern California.

Depending on where she is accepted, she plans to continue her space research. Until then, however, she remains grateful for the diversity of experience she has gathered at Embry-Riddle.

When describing the Aerospace Physiology program, Siu said, “I can confidently say that Embry-Riddle professors openly invite undergrad research and welcome support for external opportunities. That has allowed me to initiate and maintain professional friendships in many industries — like the National Academy of Science, the Academy Awards’ Science and Technology Council, NASA Ames, the NASA Johnson Space Center, International Space University — all in the mutual interest of excellence and curiosity.”

One of Siu’s mentors on the NASA research, Dr. Amber Paul, assistant professor in the Department of Human Factors and Behavioral Neurobiology, reinforced that Siu’s enthusiasm for learning has made her transition to Embry-Riddle successful thus far.

“Olivia is always smiling and inspiring her peers,” said Paul, who joined Embry-Riddle last year through a Wessel Endowed Chair position in the Aerospace Physiology program and has been working to expand the university’s molecular research capabilities. “She will do great things.”

Paul would know — she was a postdoctoral fellow at the NASA Ames Research Center, working on the same radiation research that Siu is currently involved in, before her arrival to Embry-Riddle.

“Olivia exemplifies leadership, which is a necessary attribute for success,” Paul added. “Through excellence and dedication, having Olivia part of the Aerospace Physiology program has certainly promoted its success and influence.”

Siu, however, is no stranger to the spotlight. In addition to her NASA internship last year, which put her on the path to conduct her current research, she has also won a Goldwater Scholarship. Her work studying hypoxia in Embry-Riddle’s High-Altitude Lab has given her invaluable firsthand experience in understanding how harsh in-flight conditions can affect the human body. And she was also featured earlier this year for participating in the Center of Mentorship Programs and Student Success (COMPASS), which pairs students with advisors who help them design their degree and career paths.

All virtual poster presentations for the AAAS event can be viewed online.