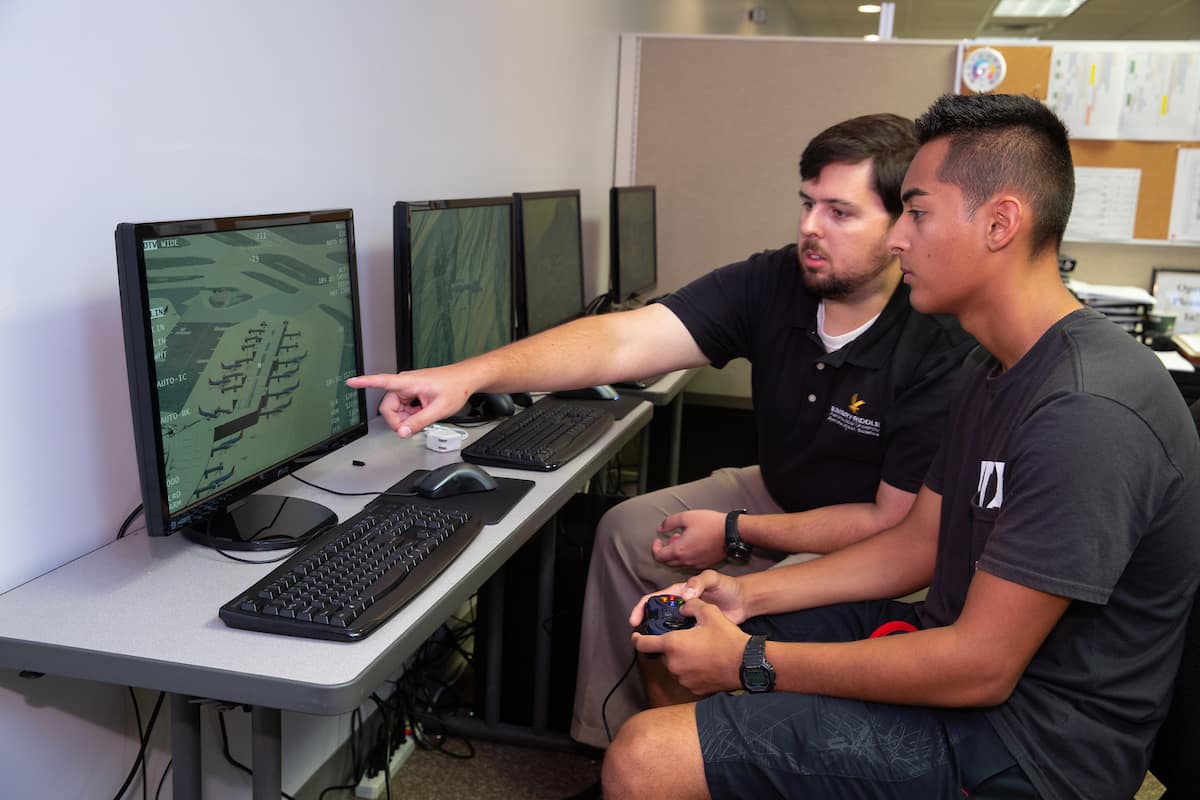 Share:
Inside Embry-Riddle Aeronautical University’s Unmanned Aircraft Systems (UAS) Training Laboratory at the Daytona Beach Campus, new, cutting-edge flight simulation technology and software is being installed, assuring that the lab remains one of the most advanced unmanned aircraft simulation facilities in the country.

Using much of the same simulation technology provided in U.S. military training, students will soon train with more detailed virtual environments and with the same unmanned aircraft used in the industry. The new simulation stations are also being equipped with an autonomous autopilot system for the aircraft to fly more independently within the virtual environment.

“We will have realistic geographical data that will represent as close to the real world that we can provide,” said Billy Rose, UAS Simulation and Flight Instructor for Embry-Riddle’s Daytona Beach Campus. “The technology is more representative of what is currently used in the industry of UAS. The students will have more advanced and automated features than what are used on actual unmanned aircraft.”

The simulators in the lab will use software developed by the Next-Generation Advanced Research (NEAR) Lab at Embry-Riddle; a Microsoft DirectX-based render engine; and Piccolo Command Center Interface Software, an autonomous autopilot system for flying UAS before the students train in the field with the program’s advanced unmanned aircraft.

The geospecific terrain virtual environments will contain replicas of areas of interest, such as several local airports with detailed models of runways, buildings, and other airport structures.

MetaVR visuals are used in the U.S. Army’s UAS training simulators. The high-resolution VRSG systems are also used by other branches including the U.S. Navy and U.S. Air Force, making MetaVR one of the largest suppliers of commercial licensed 3D visualization software for UAS simulation training in the U.S. military.

W. Garth Smith, CEO and co-founder of MetaVR, Inc. with Richard Rybacki, said the installation at Embry-Riddle is their largest to date for any educational institution. Smith said students will train on the most current military and commercial applications.

The Penguin C aircraft, which are being integrated into the UAS program and new curriculum next year, are long-endurance, long-range professional unmanned aircraft systems, considered one of the most capable surveillance and inspection UAS flying today. The runway-independent, fixed-wing aircraft are capable of flight times in excess of 20 hours and able to operate at distances up to 60 miles (100 kilometers) beyond-visual-line-of-sight (BVLOS) from a two–person ground control station.

“We are excited about offering this real-world UAS flight training as part of our regular curriculum,” said Michael E. Wiggins, professor and Aeronautical Science department chair. “Operating these aircraft utilizing industry standards of practice will allow us to educate our students using the highest levels of safety and professionalism expected by the industry. By blending advanced UAS simulation training with actual UAS flight operations, we are sending the best prepared graduates we can to enter the workforce with the skillset necessary to meet tomorrow’s needs.”