Eagles Use VR to Train Next Generation of Naval Midshipmen 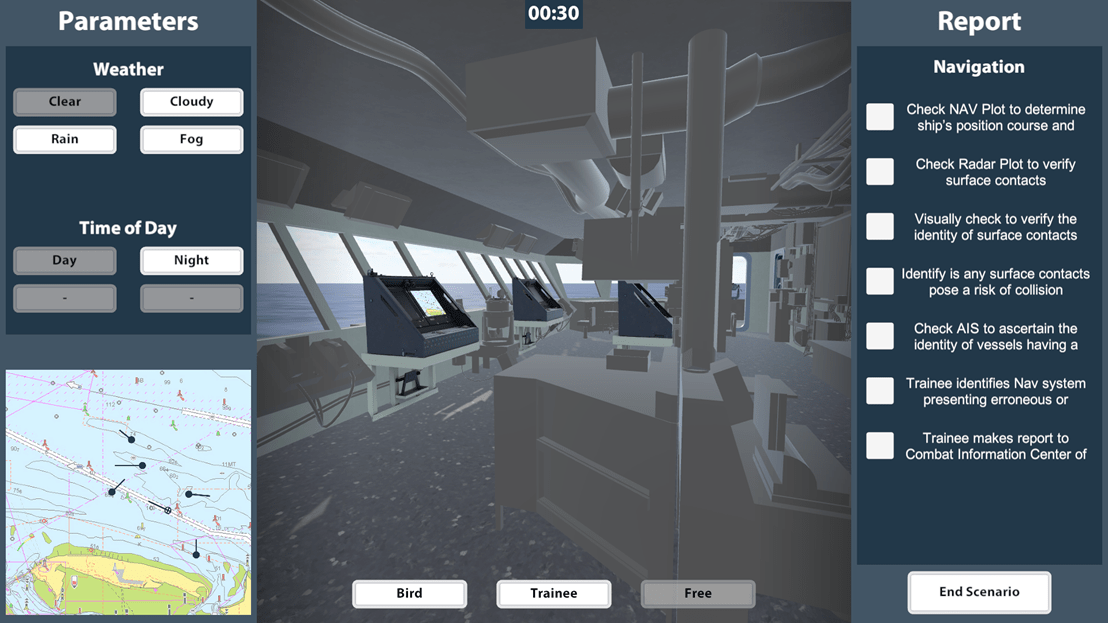 Researchers at Embry-Riddle Aeronautical University are designing a simulator to train Navy ROTC students, or midshipmen, in how to identify cybersecurity threats. To accomplish this goal, they’re leveraging virtual reality (VR) expertise found on the Daytona Beach Campus.

Backed by classroom lectures and digital simulators, the state-of-the-art centerpiece of the course is the virtual reality component which, according to Dr. Andy Dattel, director of the Cognitive Engineering Research in Transportation Systems (CERTS) Lab, simulates the bridge of a ship, putting students in control of identifying potential threats before they become catastrophic.

“Participants monitor outside displays — other ships in the ocean — as well as inside displays — like radar, Automated Information Systems and the Voyage Management System,” said Dattel, who also serves as an associate professor in the College of Aviation’s School of Graduate Studies. “All three of these displays can be ‘hacked.’”

For example, a ship that normally should appear on the Voyage Management System may be removed in the VR environment, or a phantom ship may appear. By cross-referencing inside and external sensors, participants learn how to identify cyber threats. Students also assume the role of both trainee and instructor, tasked with not only identifying but also creating threats for other trainees to uncover, further enhancing their training.

Noa Baggs, a Business Administration junior and one of the student developers on the project, hopes that the hands-on work of building the virtual environment creates a direct line to employment after graduation.

“As the 3D modeler for the project, I make most of the objects and 3D assets that you will see in the simulator,” said the former Kailua-Kona, Hawaii, resident, who plans to include his models from the project in his employment portfolio. “I intend on pursuing a career doing 3D work; ideally, I'd like to become a video game developer or a VFX artist for a film studio.”

Funded by the Office of Naval Research, this eight-week training program, featuring the Cyber Security Virtual Reality Trainer (CyVR-T), will include up to 20 midshipmen in its first class, as well as three undergraduate students who have played important roles in the development of the software and two graduate research assistants.

Currently in the testing phase, the program is expected to deploy in September. Once the concept is proven, Dattel envisions adapting its capabilities into other areas.

“The trainer can also be expanded to manipulate a variety of systems and environments, such as putting aviation students in virtual flight decks under cyber attack,” he said. “Participants develop enhanced situational awareness, an ability to identify hacked systems and threats, and improved overall performance. This could just be the beginning. ”