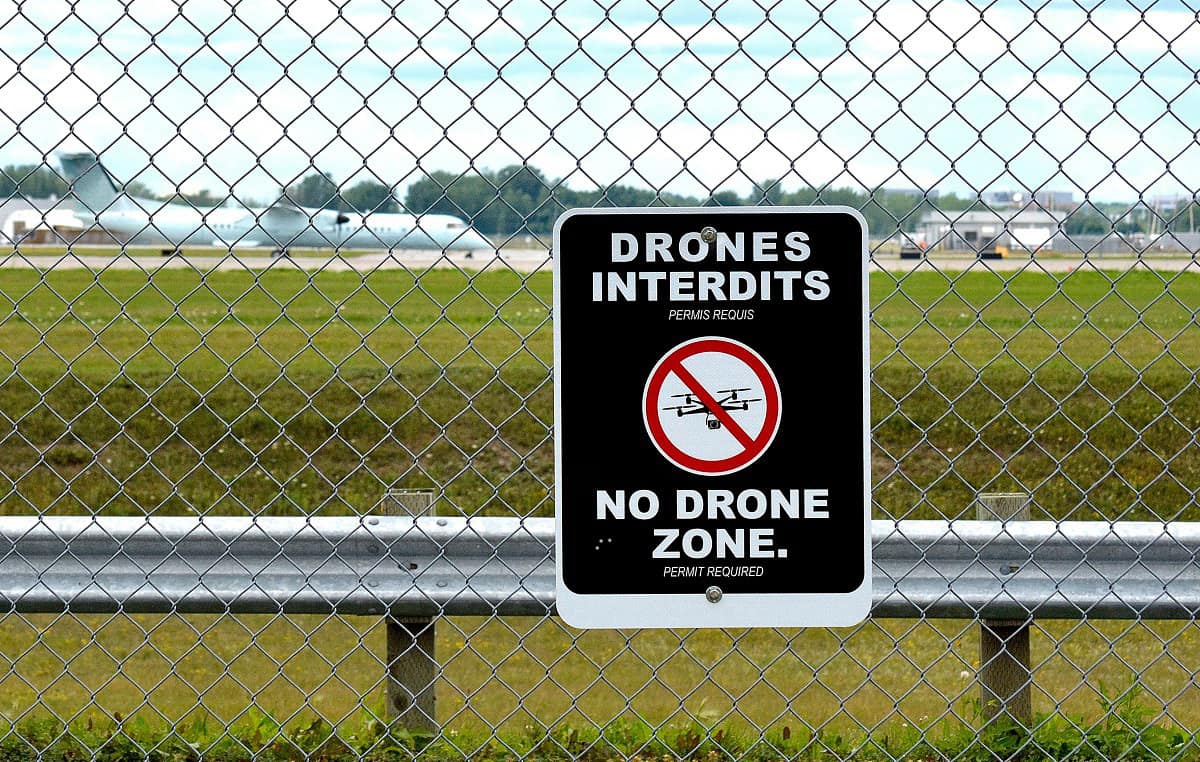 An international airport prominently features its drone policy outside of the runway. (Photo: Getty Images)

New technology that detects and commandeers unauthorized drones, guiding them to land safely, will be commercialized under a licensing agreement between Embry-Riddle Aeronautical University and Drone Defense Systems LLC of Daytona Beach, Fla.

The technology, developed by Embry-Riddle faculty member Dr. Houbing Song, suggests a safe, affordable way to neutralize rogue drones – without having to shoot them down or force them to crash-land – even in civilian settings such as large outdoor entertainment arenas and airports.

How does the technology work?

Song’s proposed system leverages a network of wireless acoustic sensors to identify a flying drone. To distinguish drones from birds, Song and his Ph.D. students – Yongxin Liu and Jian Wang – built a computer-based “brain” called a neural network that is continuously learning and therefore getting smarter. After the system confirms a drone, the acoustic sensors, working in tandem with beacon receivers, transmit information to a control center.

If the drone is on an unauthorized flight, Song’s system uses sophisticated pattern-recognition techniques to decipher the drone’s video-streaming channel and interrupt the broadcast with a warning message. “For each drone,” Liu explained, “the acoustic pattern might be a little different, but we can tell them apart, just as anyone can distinguish between a songbird and the noise of a crow.”

The system can also hijack the drone’s communication channel to trigger its pre-determined return flight, or otherwise trick the drone into leaving the area, said Song, an assistant professor in the Electrical, Computer, Software and Systems Engineering program and director of the Security and Optimization for Networked Globe Laboratory (SONG Lab).

Kaminis explained the technology this way: “It disrupts communication between the pilot and the drone. It detects the drone, finds out what language the drone speaks, activates an emulation system that mimics the drone’s language, and snatches control away from the pilot.”

The technology addresses an increasing public safety and security risk. “Reports of drone sightings from pilots, citizens and law enforcement have increased significantly over the past few years,” Song noted. “The U.S. Federal Aviation Administration currently receives more than 100 such reports each month. The goal of our technology is to counter unauthorized drones effectively, while ensuring low collateral damage and low cost per engagement.”

Existing strategies for combating rogue drones range from dispatching birds of prey to shooting bullets, nets or channel-jamming electromagnetic noise at unauthorized drones. Military and corporate drone-jamming technologies do exist, Kaminis said, but the cost of those systems makes them inaccessible for smaller airports or private venues.

By comparison, Song’s system could be manufactured at lower cost, Kaminis said. It would also work over long distances and in a variety of settings. “Our solution is friendly,” Song said. “Rather than destroying the drone, we guide it to a safe landing place.”

This approach offers important advantages, said Kaminis, whose company already markets another counter-drone technology. “My existing product is intrusive – it’s considered a weapon because it jams drones and makes them fall out of the sky. The Embry-Riddle technology is non-intrusive, so it is ideal for civilian applications and easy to export as it doesn’t fall under ITAR (International Traffic in Arms Regulations).”

Kaminis and his wife, Rita, moved from Greece to Daytona Beach in the early 1980s, when he attended Embry-Riddle. One of the Kaminis’ two sons, Angelos, is now a student at the university who also serves as manager of Student Union operations and events. Kaminis is optimistic about the potential for Song’s invention. “When people work together and put their heads together, great things can happen,” Kaminis said. “We’re going to make history for Embry-Riddle.”

A U.S. patent application has been filed by Embry-Riddle, Song and his Ph.D. students Liu and Wang. Song credited Dr. Susan Allen, associate dean for research in Embry-Riddle’s College of Engineering, with introducing him to Kaminis.