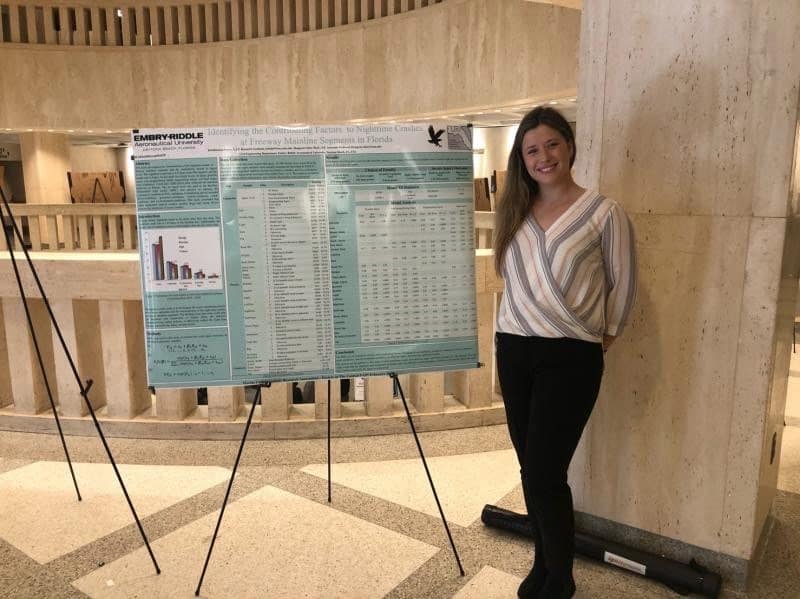 Embry-Riddle Aeronautical University’s Discovery Day, which was held online this year due to the Covid-19 global pandemic, gave student researchers at the Daytona Beach, Florida, and Prescott, Arizona, campuses an opportunity to present their projects without time or space limitations.

“Virtual Discovery Day provided a venue for members of the Embry-Riddle community to gather online during these challenging times to celebrate student research,” said Wes Lewis, director of the Office of Undergraduate Research, adding that online presentations drew visitors from more than 44 countries.

Fifty-six projects — ranging from topics such as using drones to prevent drownings, the effect of rudeness on productivity in the workplace, and the design of a jogging stroller attachment that allows for a more natural running gait — were presented at the Daytona Beach Campus’ virtual Discovery Day, featuring posters, abstracts and student-produced audio and video segments.

“Participants were able to engage in deeper dialogue because they had time to think and develop thoughtful questions and responses that a physical conference might not have allowed for,” said Lewis.

A presentation of a “slosh control” system, illustrating why liquids such as fuels sloshing around inside of tanks within trucks or rockets can be damaging or even deadly, won first-place in the undergraduate team category. The project, presented by Nikita Amberkar, outlined a system in which liquid within a tank was topped with an electromagnetic membrane. An electromagnet at the bottom of the tank created a downward force on the membrane and, therefore, on the liquid, reducing sloshing.

Amberkar, who is a senior in Aerospace Engineering with a minor in Applied Mathematics, said Discovery Day helped her in a variety of ways.

“Now, being able to present in front of an audience is not hard,” she said. “Answering questions right on the spot became easier, as well.”

Kristiansson, a senior in Civil Engineering beginning a master’s program at Embry-Riddle next year, also won first-place in the undergraduate individual category for her project comparing the resiliency of maritime ports.

“I am extremely impressed with this year’s Discovery Day and am looking forward to seeing what other possibilities this opens up for future virtual events at the Daytona Beach Campus,” Kristiansson said.

Also in the undergraduate individual category, Julian Jesso won second place with a project using big data and machine-learning to predict and plan maintenance for future loads on Florida highways and bridges.

Third place in the same category went to Zachary Yack for his “Analysis of Upstream Synoptic Conditions for Tropical Cyclones that Pass Near or Over Florida.”

Andréa Hughes, Ph.D. candidate in Engineering Physics, won the graduate category award for a project that researched Mars’ proton aurora phenomenon using data from the Mars orbiter known as MAVEN (Mars Atmosphere and Volatile EvolutioN mission). The research revealed an unexpected connection between proton aurora and the planet’s atmospheric escape and water loss. These phenomena can act as a proxy for observing the water loss that is responsible for the dramatic change in Mars’ climate over time.

“I think that we made the best of a difficult situation for this year’s Discovery Day,” Hughes said. “Any opportunity to present one’s research is a chance to build confidence and competency in his/her area of expertise.” 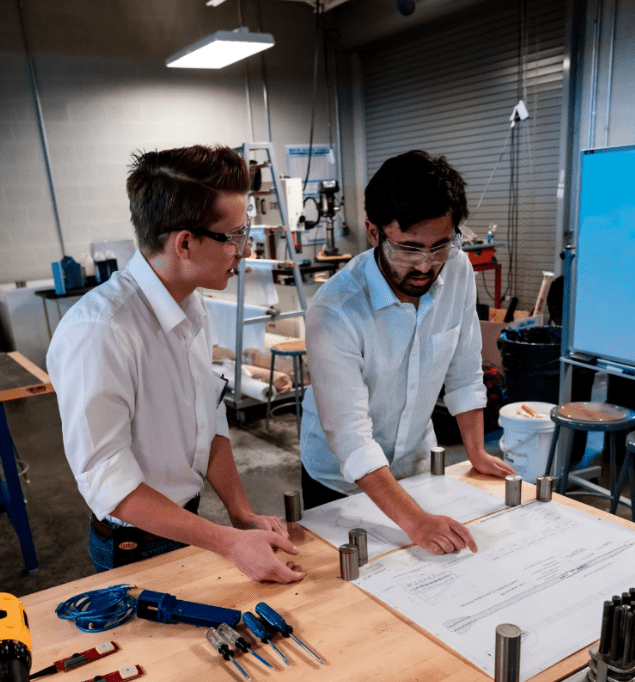 One standout project, presented by sophomores Gaurav Nene and Cooper Eastwood, both students in Embry-Riddle’s top-ranked Aeronautical Engineering program, explored the development of a two-stage, unguided, reusable suborbital sounding rocket. The research would combine low-cost rocket propulsion and off-the-shelf flight systems equipment in building a vehicle that is cheaper to launch than comparable commercial- and university-developed vehicles within the same altitude range.

“We've gained valuable experience in launch vehicle development through this project by working with commercial spaceports, professional launch vehicle engineers and military/government agencies,” said Nene. “We hope that more students consider joining us in our vision to go to space cheaper and often.”

A trio of College of Aviation students also looked into the use of virtual reality technology in flight training, citing cost, time and efficiency as benefits of such a technological shift. Virtual reality can put a pilot candidate directly into any aircraft, where full interaction is available. The trainee can also be placed into any flight scenario, ranging from engine fire and failure, to a simulated mock check-ride allowing him or her to interact with simulated systems within any aircraft.

“A huge shout-out to our undergraduate researchers and their mentors, as our virtual Discovery Day event was one of our best ever programs with posters and videos that we will be able to share long into the future,” said Dr. Anne Boettcher, director of undergraduate research at the Prescott Campus.

Explore each of the 30 research projects presented at Prescott’s Discovery Day online.