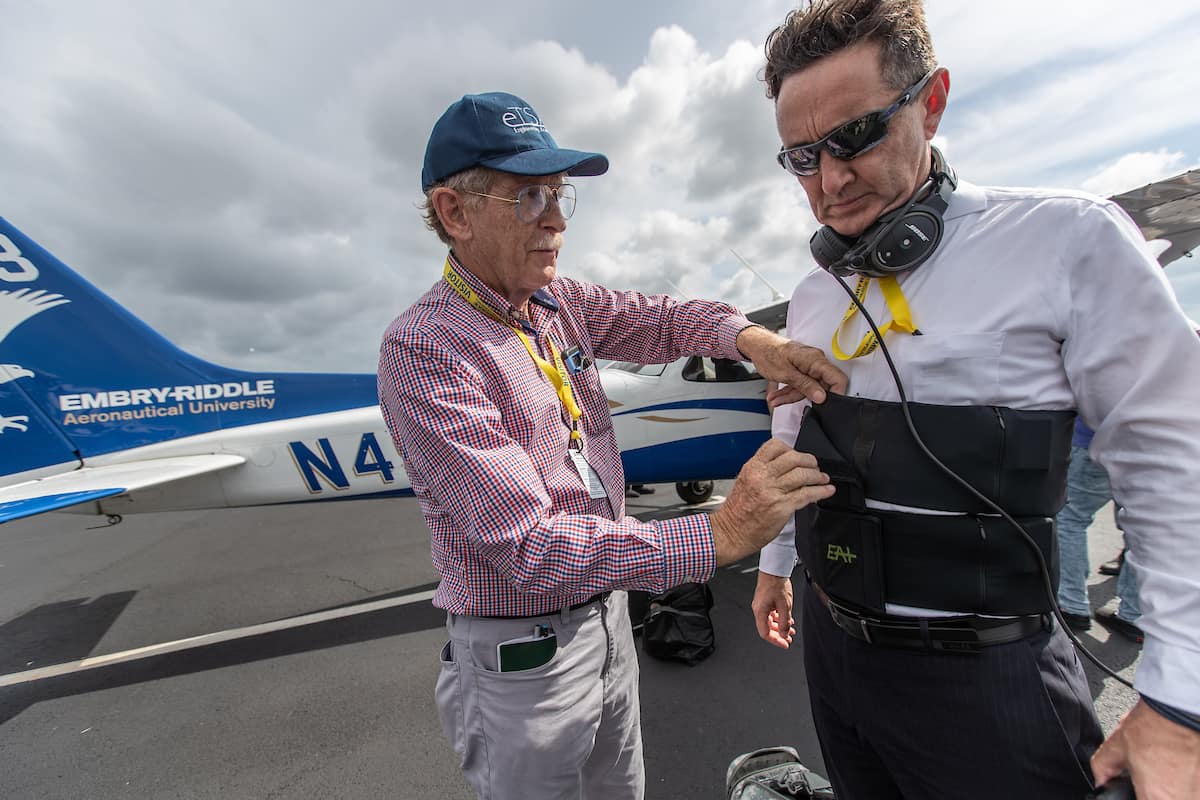 Dr. Angus Rupert, medical research scientist with the U.S. Army Aeromedical Research Laboratory, helps outfit Dr. Braden McGrath, Research Professor for Validated Mathematical Model of Spatial Disorientation, with a tactile belt that will transmit vibrations onto his torso during flight to keep him oriented, no matter what the visual conditions. (Photo: Embry-Riddle/David Massey) 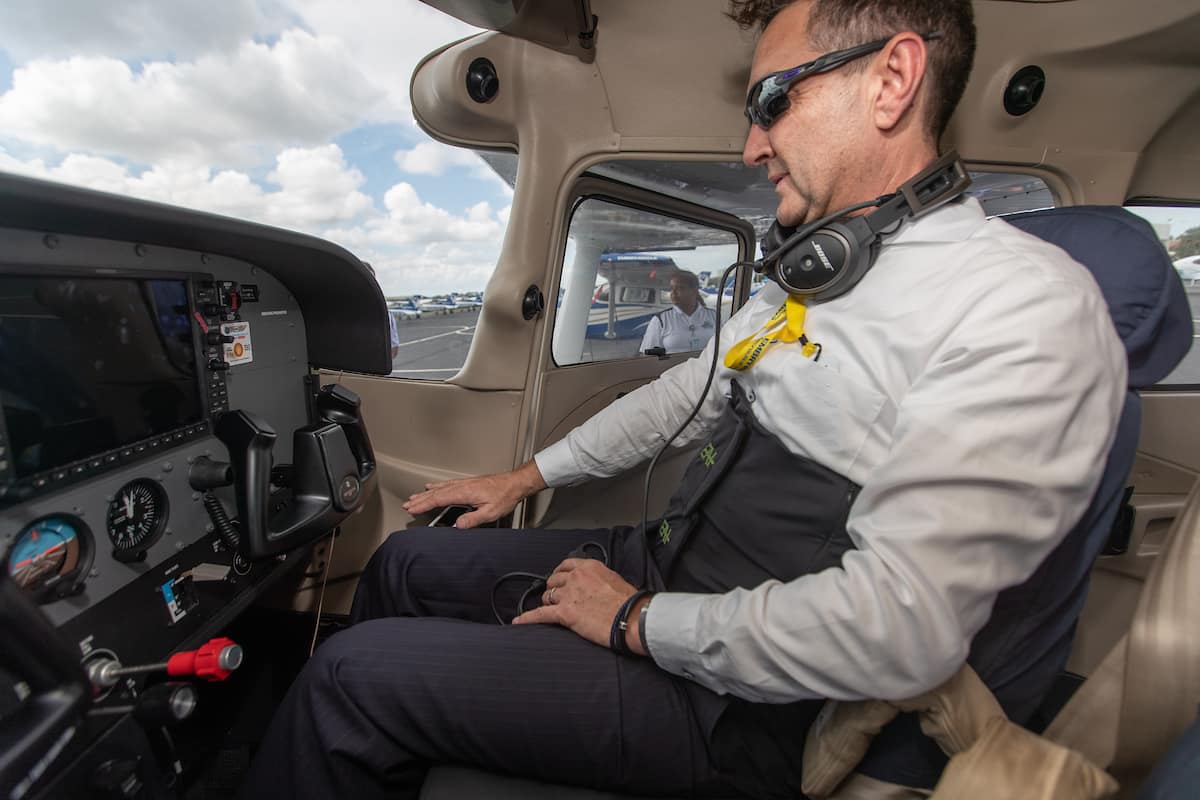 Dr. Braden McGrath, center, Research Professor for Validated Mathematical Model of Spatial Disorientation, holds his hand over a sensor that will monitor him, along with the torso vibration band while testing haptics during a flight at Embry-Riddle Aeronautical University's Daytona Beach Campus. (Photo: Embry-Riddle/David Massey) 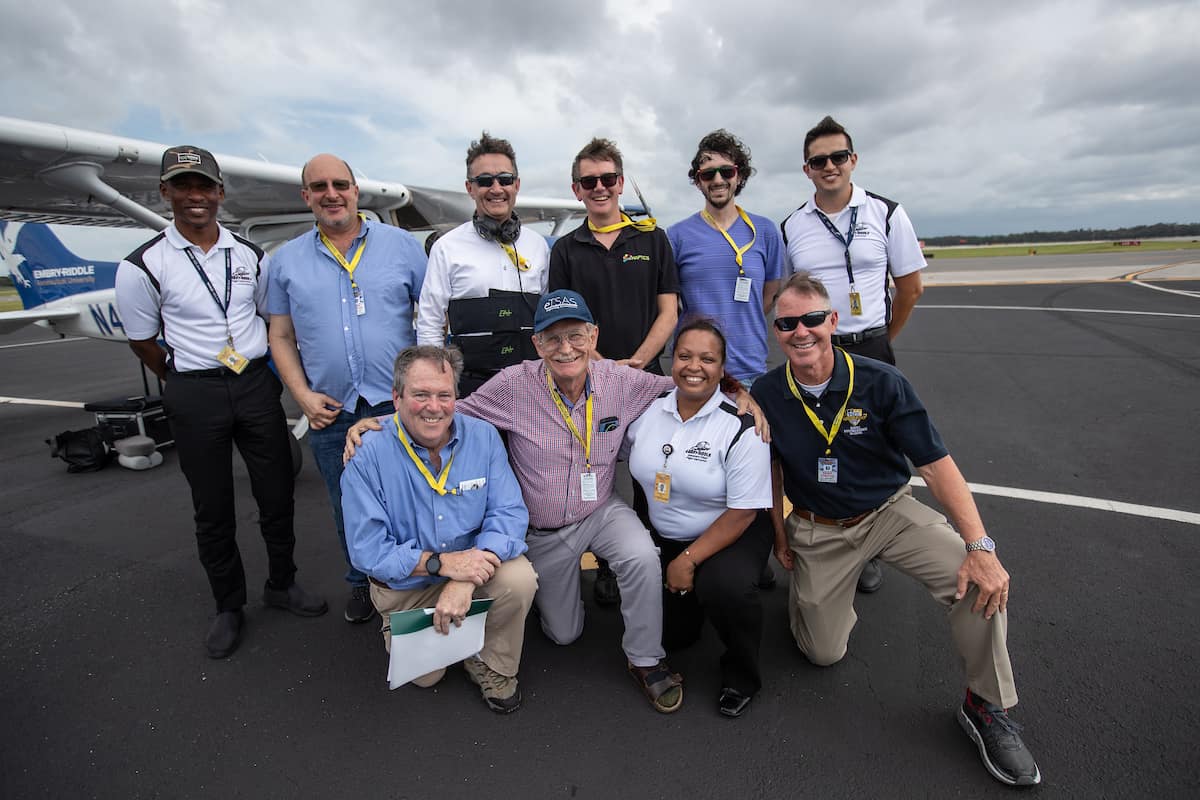 Four hours of training — that’s all it takes to attack the problem of spatial disorientation (SD) among pilots, and to save their lives, according to Dr. Braden McGrath, research professor in Embry-Riddle’s Department of Human Factors and Behavioral Neurobiology.

Spatial disorientation in flight occurs when what pilots feel clashes with reality — when they believe they’re flying upward but their plane is actually headed toward the ground, for example. Blinking lights, heads-up displays and a variety of other safety controls are already available in the flight deck to counteract this occurrence, but those features are all visual, said McGrath, who conducted his doctoral thesis on this topic and believes that the complete solution lies in also using another of our five senses: touch.

“Tactile cueing keeps pilots aware: It gives them the right information at the right time and in the right modality,” he said. “It keeps them in the loop.”

Many pilots who find their vision obstructed or attention distracted are not in the loop, however, and they might not even realize it. That’s where the Tactile Situation Awareness System (TSAS) comes in — a device invented by Dr. Angus Rupert of the U.S. Army Aeromedical Research Laboratory that vibrates at different locations and intensities along a pilot’s torso, alerting him or her to irregularities in an aircraft’s orientation. If a plane is rolling slightly left, for instance, the vest will lightly rumble on the pilot’s left side, and it will continue to do so until the roll is corrected.

By utilizing vibration, the vest takes visuals and even intellectual processing out of the equation. Pilots don’t need to be able to see or read controls. They only need four hours of training, and then they’re fluent.

Tactile processing takes place at a more reflexive, “midbrain level,” Rupert said. “The goal is to align the information in the cockpit with the way we take in information on Earth.”

TSAS also works to address a problem that can affect any aviator at any experience level.

“The Air Force has never lost less than five pilots per year due to spatial disorientation,” he said. “They lost more than 150 aircraft and 150 pilots from the 1980s to the early 2000s.”

But TSAS, a fireproof garment with miniature tactile actuators sewn inside of it, can change all that. And graduate students are working hard to make sure it does. 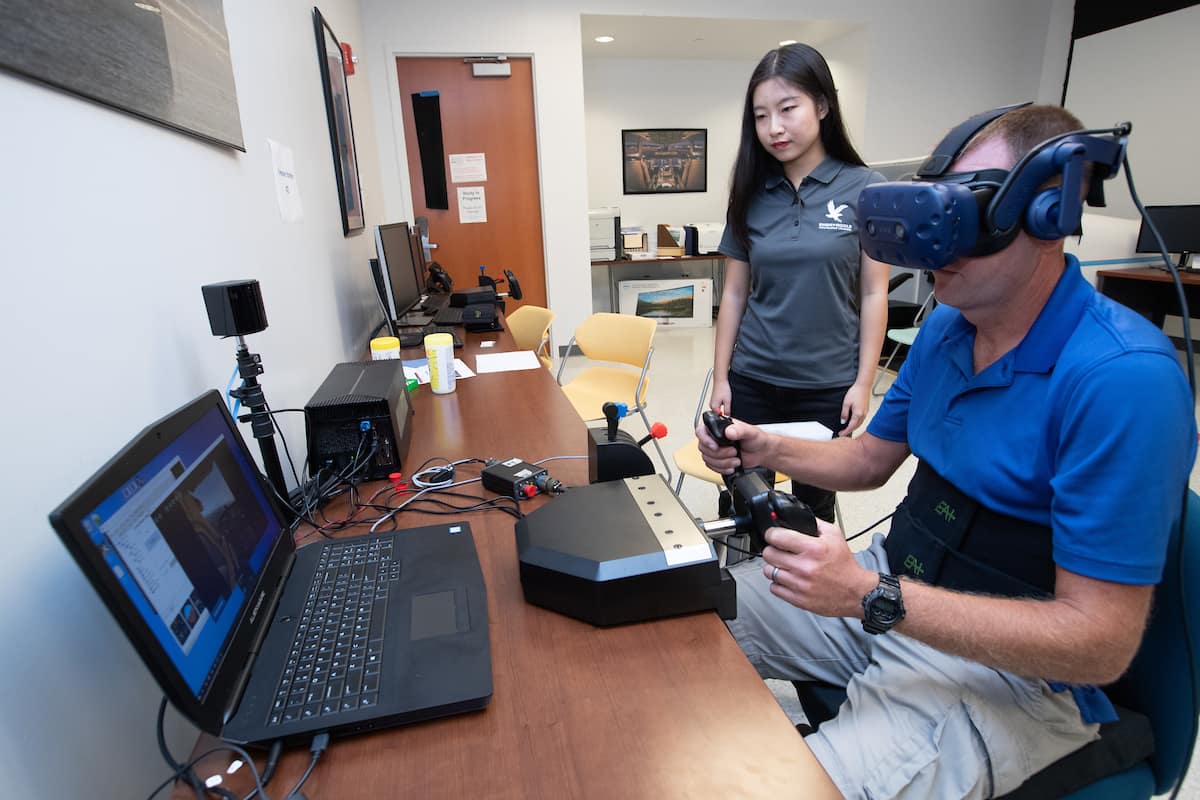 Before pilots can utilize the haptic vest in the air, they need training — from grad students Tyson Richards and Qianhong “Echo” Liu.

“I’m not an aviator, so I didn’t realize how big of an issue SD was until I got involved in this research,” Richards said. “When you’re disoriented in an aircraft, it can take up to 30 seconds for you to get reoriented. That’s a huge amount of time.”

Risks are eliminated in virtual worlds, however, and so before test subjects are ever equipped with tactile belts on the flight line, they go to the Aerospace Physiology Lab, strap on a 3-D headset and tactile belt, and learn to read the rumbles they feel pulsing up and down their sides every time the yoke on their simulator leans off-center.

Once pilots acclimate and can reorient using just signals from the tactile belt’s actuators, even with their eyes closed and after simulating mid-flight barrel rolls, they’re ready for the real world.

With an unobstructed pilot safely controlling the aircraft from the left seat, Richards and Liu set up their test subjects in the right seat and outfit them with a tactile belt. Just like in training, the goal is for the subject to use the belt’s tactile cues to prove that they understand where the horizon line is — even though most of tests are conducted at night, and in one of the five test scenarios, they wear either a blindfold or a pair of tinted goggles, simulating poor visual environments where spatial disorientation is most common. Afterward, Richards and Liu conduct post-flight interviews to compare the pilot’s perceptions to what they actually experienced.

“It just feels great to help improve aviation safety,” said Liu, who intends to continue on in this field after graduation.

Richards, who serves as an active-duty member of the U.S. Coast Guard, agreed.

“In the classroom, you just kind of hear about some of these things, but being able to see it in practical application — and actually do something about solving it — is different,” he said. “Every single time we do these trials, there is always something unscripted. It’s always a challenge and you have to solve problems and come up with solutions to make it work.”

That’s what makes the process rewarding. That’s why it’s exciting.

A ‘Clear and Obvious’ Solution

When you’re disoriented in an aircraft, it can take up to 30 seconds for you to get reoriented. That’s a huge amount of time.

“Back then, people looked on spatial disorientation as a weakness of the pilot,” he said, adding that some saw the additional safety feature as a “crutch” to good pilots.

“We knew we had the solution to the problem at that point and have fought ever since to bring it into the public,” Rupert said.

Dr. Jon French, Human Factors professor, is one of the many to join in on that fight, and he’s brought arguably the most important resource to the research: students

“This project is at the nexus of three specialties, which are quite rare at any university — hardcore mathematics, human factors and aviation,” McGrath said. “The fourth piece of the puzzle is the students. Students bring the energy and new ideas.”

Additionally, when it comes to any project — especially one that has had involvement from every military branch as well as NASA, where Rupert used to work — affordable brainpower is key, and that’s something students bring in bunches. Students endlessly explore and learn and test and develop, McGrath said. They contribute, and they earn course credit. It’s a win-win.

“Students are really encouraged to do research and to participate at the earliest levels,” French said. “Grad students are usually working with a professor who is working in a specialized area that interests them personally.”

Throw enough brainpower at a problem, Rupert said, involve enough people, and eventually something is bound to “click.”

“That involvement may be the key that transitions it all — that moves this project from research to real-world application,” Rupert said. “You never know who that key person is going to be.”