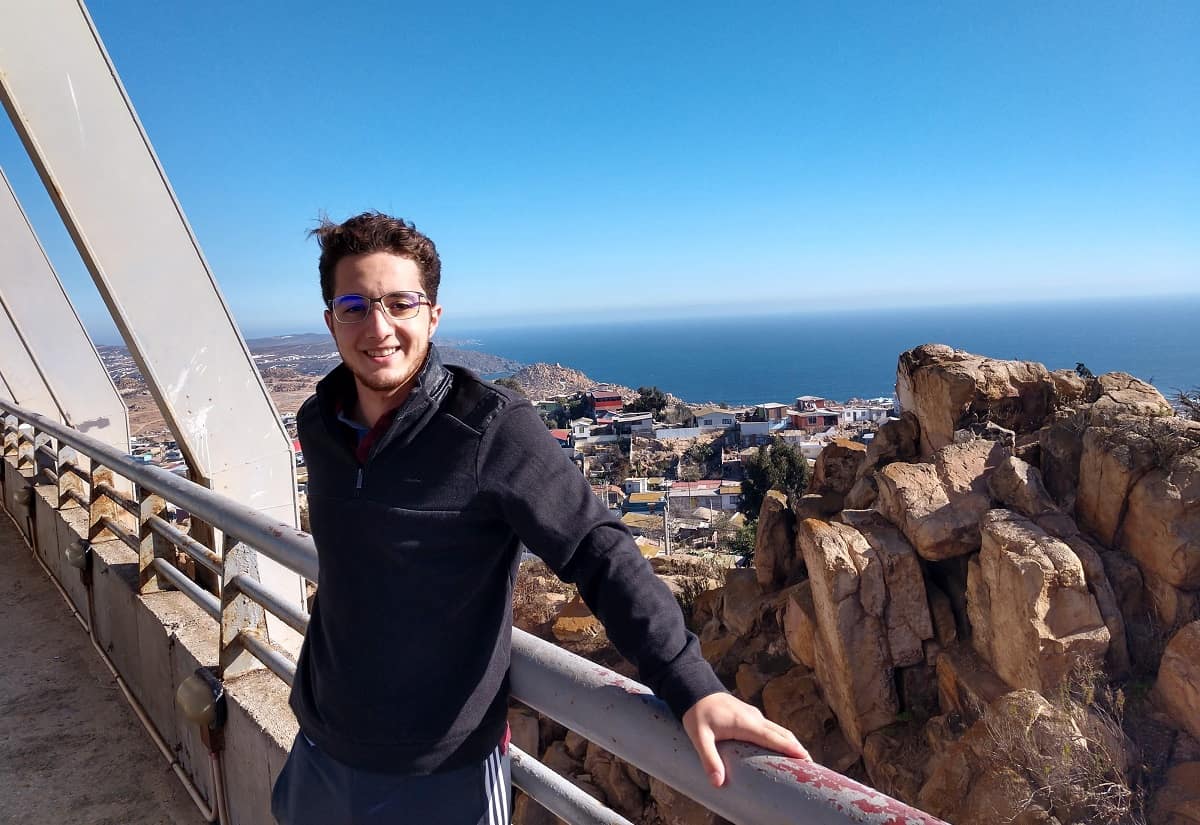 Lucas Eduardo Tijerina (shown) traveled to Chile this summer with fellow undergraduate Daniel Nigro, as part of a project that has helped prior participants land internships. (Photo: Daniel Nigro and Lucas Eduardo)

Two students who helped launch a research project focused on how a solar eclipse affects the upper atmosphere recently leveraged their experiences to score internships with Airbus and Rockwell Collins (now Collins Aerospace).

Building on the foundational work of students Nicolas Gachancipa and Julian Andres Herrera, two other undergraduates, Daniel Nigro and Lucas Eduardo Tijerina, traveled to Chile this summer to continue the study. Their research could yield new clues to certain disturbances in the upper atmosphere that can affect communication systems.

In 2017, Gachancipa and Herrera secured an Ignite grant through the Embry-Riddle Office of Undergraduate Research to begin the project, which is also supported by a National Science Foundation (NSF) Early Career Award awarded to faculty member Dr. Kshitija Deshpande.

The 2019 solar eclipse research, directed by Deshpande, assistant professor of Engineering Physics, was accepted as a poster to be presented on Dec. 12 during the American Geophysical Union (AGU) Fall meeting in San Francisco, Calif.

This year’s project involved capturing data on two characteristics of the upper atmosphere, or ionosphere — rapid variations in radio signals that reach the ground after passing through this region, and total electron content before, during and after the solar eclipse of July 2, 2019.

Rapid variations or “scintillations” in the ionosphere “can affect a wide range of industries that rely on accurate navigation systems at sea, in the sky, or on Earth,” Tijerina noted.

Nigro agreed. “Events in the ionosphere can impact any operation that’s automated and using a GPS signal to ensure accuracy,” he said. “That encompasses everything from precision mining to safely landing an aircraft on a ship.” 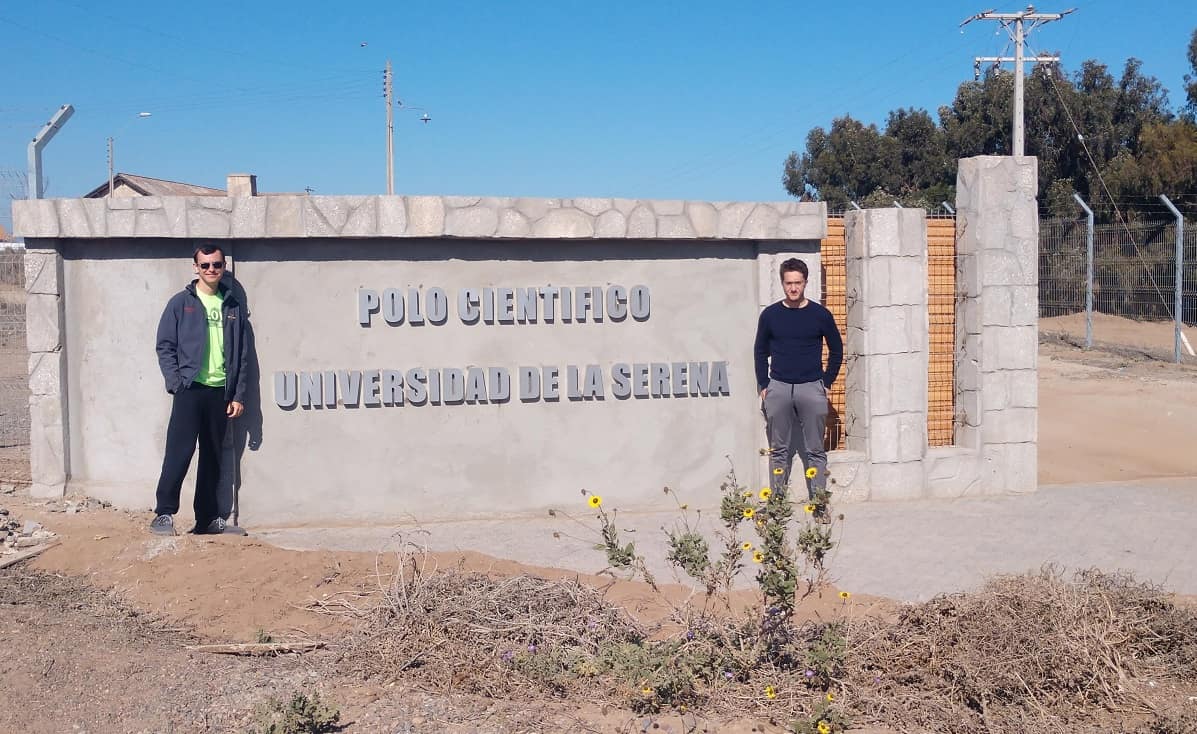 In 2017, Gachancipa and Dr. Deshpande teamed up with Clemson University researchers to study the ionosphere during a total solar eclipse over North America. Gachancipa, an undergraduate pursuing a double major in Aerospace Engineering and Computational Mathematics as well as a minor in Finance, spent that summer installing multiple GPS receivers and antennas in the Embry-Riddle Space Physics Lab. At the end of the summer, he traveled to South Carolina to set up equipment at Clemson, too, and later, he developed algorithms to model ionospheric scintillations based on data collected during the eclipse.

“The software skills that I developed working on this project helped me obtain a placement with Rockwell Collins (Collins Aerospace) in 2018,” Gachancipa said. Now, he is completing a year-long internship as a Future Projects Engineer, developing software tools at Airbus in the United Kingdom.

This year, Tijerina, a senior, and Nigro, a junior, collaborated with researchers at the University of La Cerena to continue the work launched in part by Gachancipa.

As the moon eclipsed the sun over Chile this summer, Tijerina explained, two receivers in La Serena and Cerro Pachón pulled data from two satellites within the Global Navigation Satellite System, or GNSS. In Cerro Pachón, the receiver was located at the Andes LIDAR Observatory, which is supported by the NSF. Embry-Riddle Professor of Engineering Physics Dr. Alan Liu, who oversees all scientific projects at the Observatory, was also on hand for the solar eclipse over Chile, along with his graduate students Zishun Qiao and Fan Yang.

After arriving in the city of Santiago, Tijerina recalls, he and Nigro connected with their collaborators, including Dr. Pablo Muñoz Gutberlet from the Universidad de La Serena, who drove them to La Serena, where they quickly set up one of the two receivers. With their preliminary work accomplished, the students had a chance to tour the area, hike to the massive Cross of the Third Millennium in Coquimbo, and visit the Collowara Observatory.

“We could so clearly see the bands of the Milky Way,” Tijerina said. “It was the most beautiful sky I had ever seen in my life.”

Preliminary analysis of the data that Tijerina and Nigro captured in Chile suggests there was indeed a pronounced drop and recovery of the ionosphere’s electron content during the eclipse, but no eclipse-induced scintillations.

“What this means,” Dr. Deshpande said, “is that the nighttime / darkness from the eclipse does alter the ionosphere by reducing the recombination, which causes the production of new electron density, but as the sun comes out, the density, and thus the ionosphere recovers. We didn’t see any irregularities, mostly because the drop in density is not sudden which, if it were, could have created sharp gradients in the ionospheric structures.”

Herrara’s work on the project helped him land an internship with Rockwell Collins (Collins Aerospace), where he will begin working after he graduates this December.