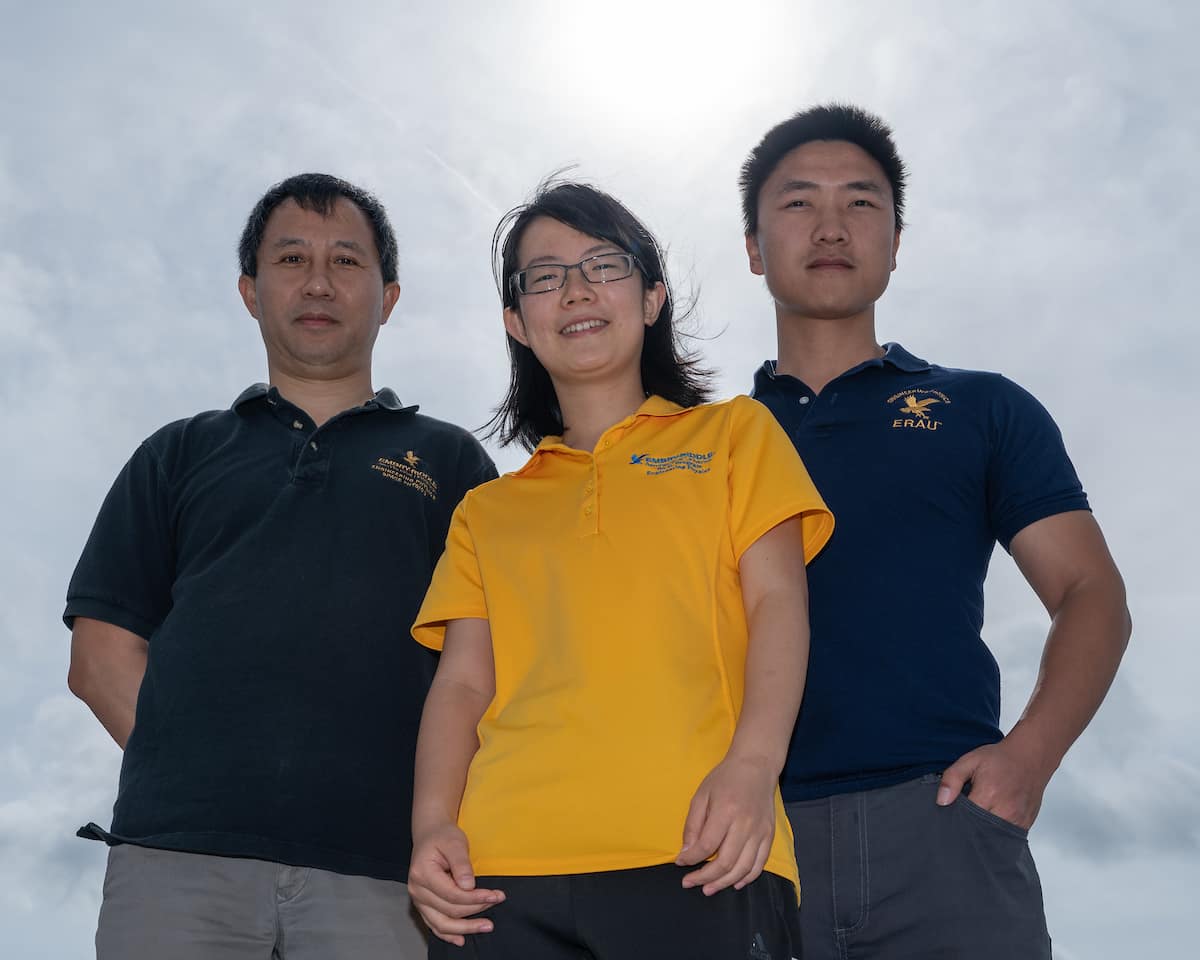 Dr. Alan Liu and his students Zishun Qiao, center, and Fan Yang, right, will use data collected during an upcoming solar eclipse to study how atmospheric gravity waves propagate upward from the troposphere, becoming large enough to cause perturbations in the mesosphere. Photo: Embry-Riddle/Daryl LaBello

On July 2, 2019, the Moon will block the Sun, treating viewers in South America to a total solar eclipse. Embry-Riddle’s Dr. Alan Liu will witness the spectacle from the Andes LIDAR Observatory in Cerro Pachón, Chile. He hopes to learn how the eclipse affects a super-cold region of the atmosphere called the mesosphere.

With the totality of the upcoming solar eclipse passing directly over the Andes LIDAR Observatory in South America, Embry-Riddle researchers will have a unique opportunity to explore fundamental science questions, thanks to Liu’s founding role in establishing the observatory.

“A solar eclipse shuts off heat and radiation to the atmosphere and it creates disturbances from the ground, all the way to the upper atmosphere,” Liu explained. “The effects of these disturbances last many hours after the sun’s shadow passes by.”

During the North American solar eclipse in 2017, researchers observed disruptions in the Earth’s upper atmosphere, also known as the ionosphere, but there were few observations in the mesosphere. “We’re working to get all of our instruments ready and coordinating with other scientists in Chile and from the United States,” Liu said. “We want to capture data continuously before, during and after the eclipse.”

The mountaintop Andes LIDAR Observatory, supported by the National Science Foundation, includes an array of collaborative scientific research projects, which Liu oversees. For example, the observatory features an advanced sodium LIDAR (light detection and ranging) that uses laser pulses to measure wind and temperature beyond 80 kilometers in altitude. Liu’s team also uses special cameras for capturing “airglow” – a kind of light show caused by energetic molecules in the upper atmosphere. Data taken by instruments at the observatory can be accessed remotely for analysis at Embry-Riddle.

Liu and his students are using these data to study how atmospheric gravity waves propagate upward from the troposphere, becoming large enough to cause perturbations in the mesosphere. “We don’t yet know enough about what’s happening in the mesosphere,” Liu said. “This is the region that connects our atmosphere with space. All spacecraft pass through this turbulent region, where meteors burn up and reentry vehicles experience large frictional heating and deceleration. Disturbances in this region can also affect the ionosphere and disrupt radio communications and satellite-based navigations.”

For two minutes at the height of the upcoming solar eclipse, Liu’s team will have a rare opportunity to capture atmospheric data during the daytime. Liu’s research group includes current graduate students Zishun Qiao and Fan Yang.

His former Embry-Riddle Ph.D. students now hold key jobs. From the class of 2017, for instance, Bing Cao works at the Scripps Institute of Oceanography; Yafang Guo is completing a post-doctoral research fellowship at the University of North Dakota; and Ryan Agner works at Integrity Applications Incorporated. Other former graduate students, from Liu’s earlier tenure with the University of Illinois, Urbana Champaign, have found positions with the University of Saskatchewan and Clemson University.

“Alan was always encouraging and motivating,” Bing Cao at Scripps said. “I was guided to think creatively and encouraged to explore new knowledge.” With Liu’s direction, Cao added, “I gained a complete sense of how to conduct research in the atmospheric field. This included choosing a scientific objective, building instruments, performing observations, analyzing data and interpreting results. Not all Ph.D. candidates are trained in such a comprehensive way. These experiences were beneficial to my current work at Scripps.”

At Clemson University, Assistant Professor Xian Lu said, “As my Ph.D. advisor, Dr. Liu guided me to learn about [gravity waves and tides] and provided thorough training to improve my background knowledge and analytical skills. This preparation put me on a pathway to establishing my academic career as a faculty member at Clemson.”

Liu’s research is part of the Embry-Riddle Center for Space and Atmospheric Research, directed by Dr. Michael Hickey, professor of Physics

Recently, the NSF awarded Liu a $670,000 grant to install a special radar instrument at the Andes LIDAR Observatory. The instrument will use radar to detect meteors in the region. The NSF award was highly competitive Major Research Instrumentation funding.