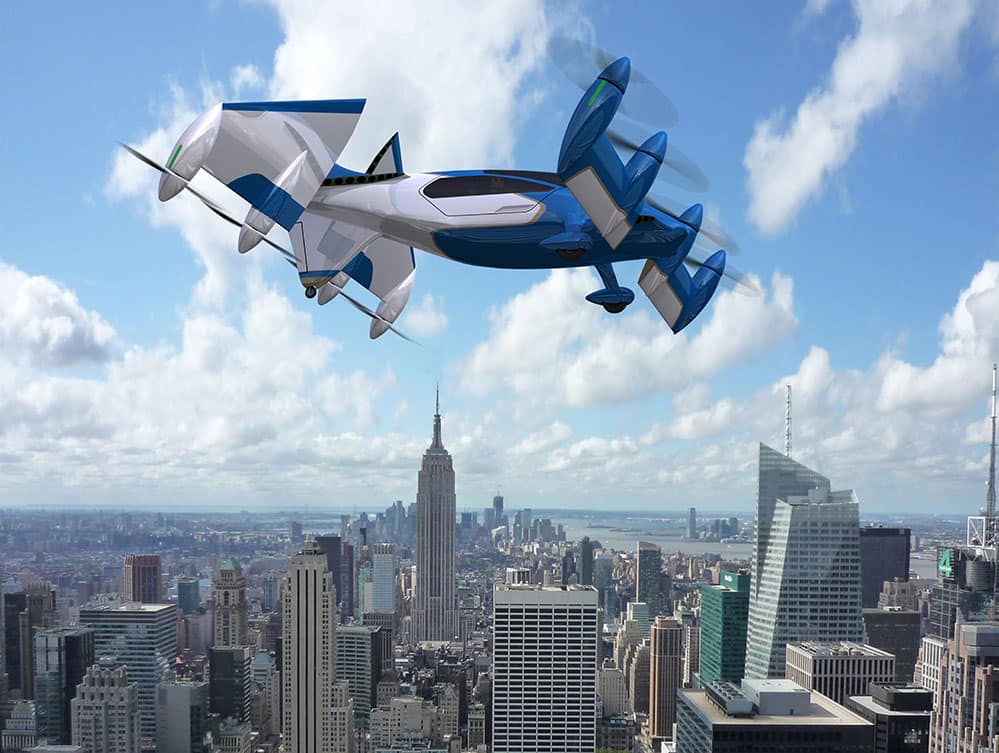 Embry-Riddle’s new personal air vehicle, known as PAV-ER, combines a decade of electrified propulsion progress, innovative control laws and autonomy research into a proof of concept that could propel the future of urban transportation.

As more than 250 companies around the world race to become urban air mobility (UAM) vehicle manufacturers, Embry-Riddle is demonstrating its leadership in the field by building a manned experimental aircraft with distributed electrical propulsion and helicopter rotor blades. For researchers, the PAV-ER project is the next logical step to merge 10 years of technology development with an eight-rotor electric vertical takeoff and landing (eVTOL) aircraft that employs cyclic propeller pitch for transition between vertical to horizontal flight modes.

“We developed all the underpinnings of UAM technology here and all that was remaining was to merge them into a technology demonstrator vehicle,” said Richard “Pat” Anderson, Ph.D., director of the university’s Eagle Flight Research Center, one of the nation’s leading researchers in alternative propulsion.

Valuable lessons learned and experiences gained through three previous projects at the Center culminated in late 2019 with the development of PAV-ER, a 500-pound technology demonstrator. Almost a decade ago, students and faculty developed the world’s first parallel hybrid aircraft, which spurred the research and development resulting in a fully electric battery-powered aircraft using a Diamond HK-36 airframe in 2016. By 2018 the researchers at EFRC designed and developed the Mark II, an unmanned VTOL tailsitter vehicle that essentially taught itself to fly using novel AI-based control laws.

Working alongside faculty researchers, aerospace and mechanical engineering students are regularly testing the capabilities of PAV-ER’s eight distributed electric propulsion system, which can change thrust by employing three different strategies. Inspired by Mark II’s propulsion system of pods, they successfully demonstrated the scalability of the models on the PAV-ER. The vehicle is able to create thrust, or control, or a combination of thrust and control through its ability to control each hingeless prop-rotor independently or in unison, in addition to its ability to change motor RPM.

“Being able to switch across these three control strategies makes the PAV-ER testbed an invaluable tool in understanding how these types of aerospace vehicles should be certified depending on the thrust, lift, and control strategy used,” Anderson said.

Control is possible through the ability to generate longitudinal and lateral moments creating significant control authority in nominal and even degraded situations.

Most of the research has focused on increasing reliability and the vehicle’s ability to accommodate in-flight failure, such as the loss of a rotor head.

“We have been able to demonstrate that PAV-ER’s distributed propulsion architecture and the high control authority of each pod allows the vehicle to continue flight with at least one failed rotor,” Anderson said. “This begins to align with airline-type safety requirements, which makes the vehicle safer than standard helicopters.”

Researchers will continue to test and refine flight control algorithms and systems to be used in eVTOL vehicles of the future. Anderson said they plan to share test data results with the aerospace community as well as industry to promote rapid advancement of UAM and to shape the future of airworthiness criteria and means of compliance for these new types of vehicles.

How Do You Cope with Covid-19? Share Your Experience in This Psychological Study