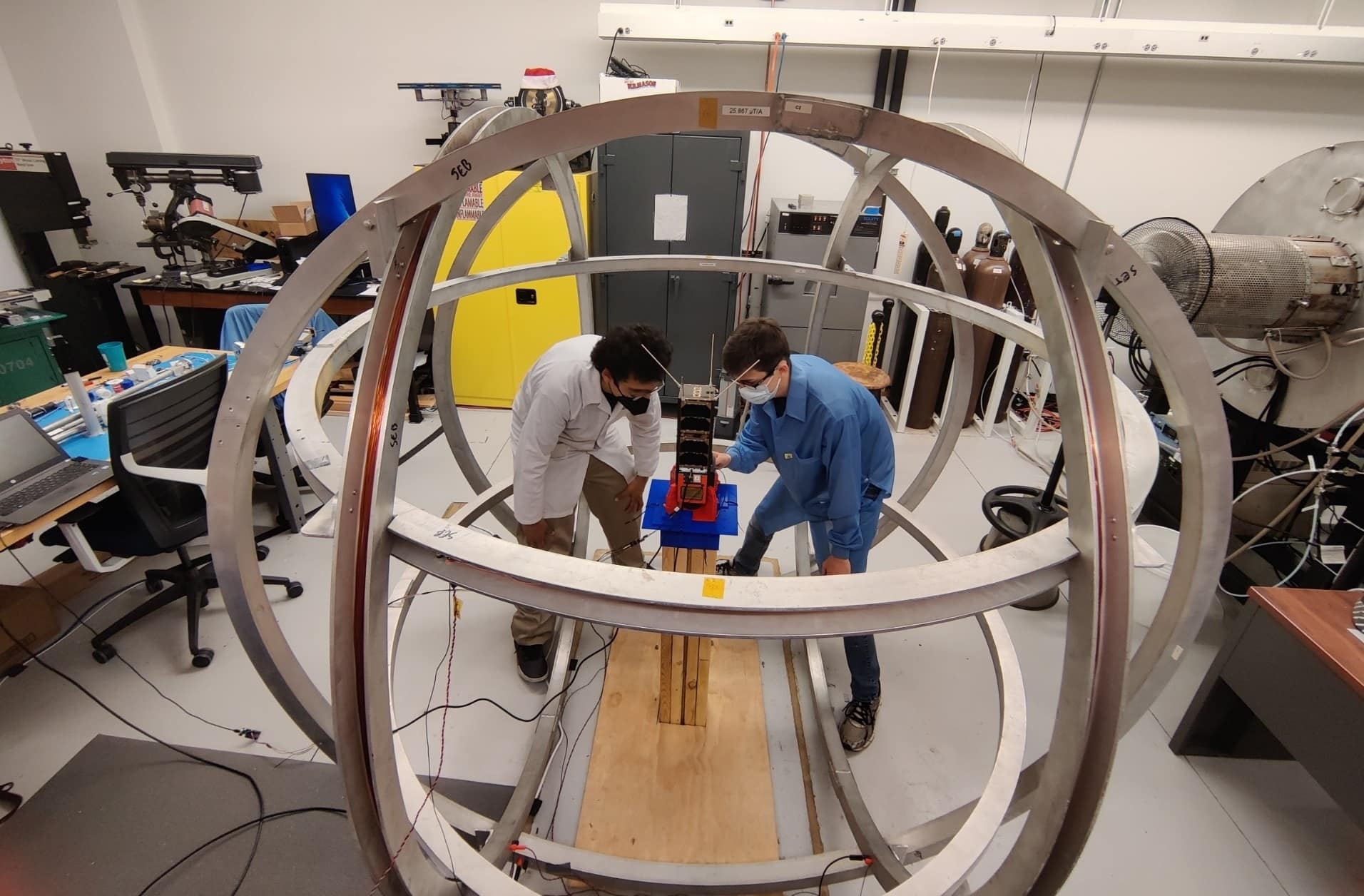 As Embry-Riddle Aeronautical University Engineering Physics senior Josh Milford works toward a career in space science, he is already gaining specialized hands-on experience building, calibrating and configuring instruments that will fly aboard satellites due to launch early next month. The project is a culmination of multi-year work that progressed throughout the pandemic.

“While working on this project, I have earned valuable experience working in a laboratory setting and learning how to work with spacecraft instrumentation, both in hardware and software,” said Milford, who plans to earn a master’s degree in Engineering Physics at Embry-Riddle and then proceed to a Ph.D. program in physics.

The small satellites, or CubeSats, outfitted with several instruments developed by professor Aroh Barjatya’s Space and Atmospheric Instrumentation Laboratory (SAIL), were built by the University of Chile and have already been integrated into a SpaceX Falcon 9 rocket (Transporter 4 Mission) that is due to launch April 1. A memorandum of understanding between Embry-Riddle and the University of Chile allows the two institutions to partner on this project as well as on a wide range of other scientific missions. 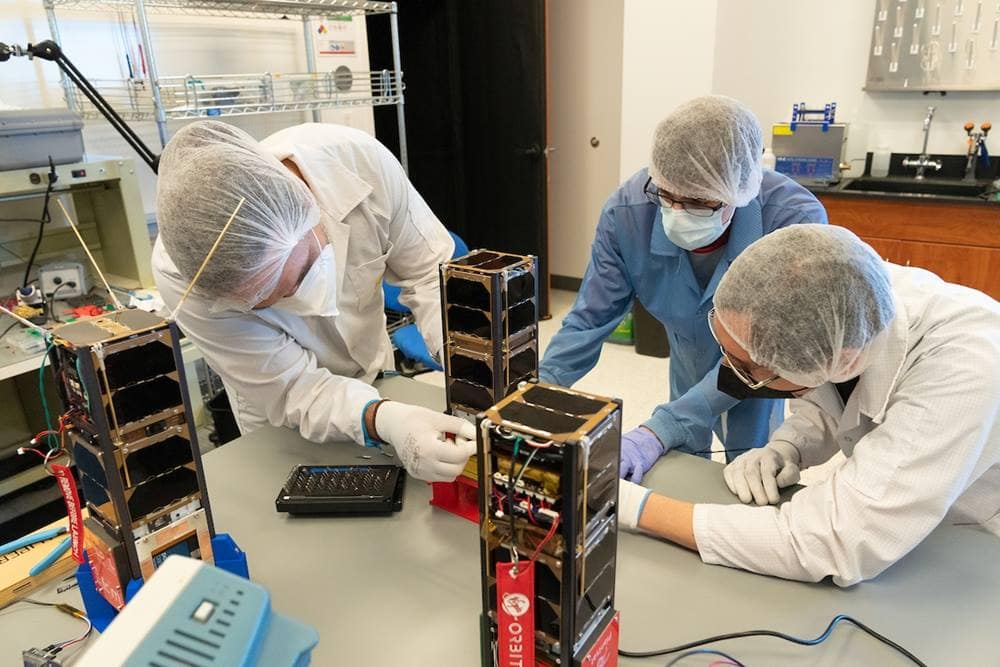 Embry-Riddle student Josh Milford (middle) works with students from the University of Chile on three CubeSats bound for space.

"This multi-satellite project with the University of Chile has proven invaluable in enabling international collaboration and broadening opportunities for undergraduate and graduate student education, and involvement in hands-on projects,” said Barjatya, who has several other rocket and high-altitude balloons projects, as well as instruments being built for a NASA Mars mission. “Combined with two Low Latitude Ionosphere/Thermosphere Enhancements in Density (LLITED) CubeSats that will also carry SAIL-built instruments, the total of five CubeSats will allow simultaneous multi-point measurements of space weather parameters.”

To Milford, the cross-cultural experience has been great.

“It has been a pleasure to collaborate with the students from the University of Chile,” said Milford. “I have enjoyed working with them to calibrate and integrate the magnetometers with their satellites. It was fun to get to know them and gain new perspective from hearing their stories about work, education and life in Chile.”

According to Chilean Cristóbal Garrido Cáceres, who has a master’s degree in Electrical Engineering from the University of Chile and will begin a Ph.D. program in the United States as a Fulbright Scholar, the cross-cultural collaboration benefited both sides.

“To work with a team from another country with a different approach and background has been an enriching experience for both teams,” Garrido Cáceres said, adding that the project is “ambitious and complex. Technical skills are not enough; you need to have self-control, the capacity to solve unexpected problems and to be very disciplined and motivated.” 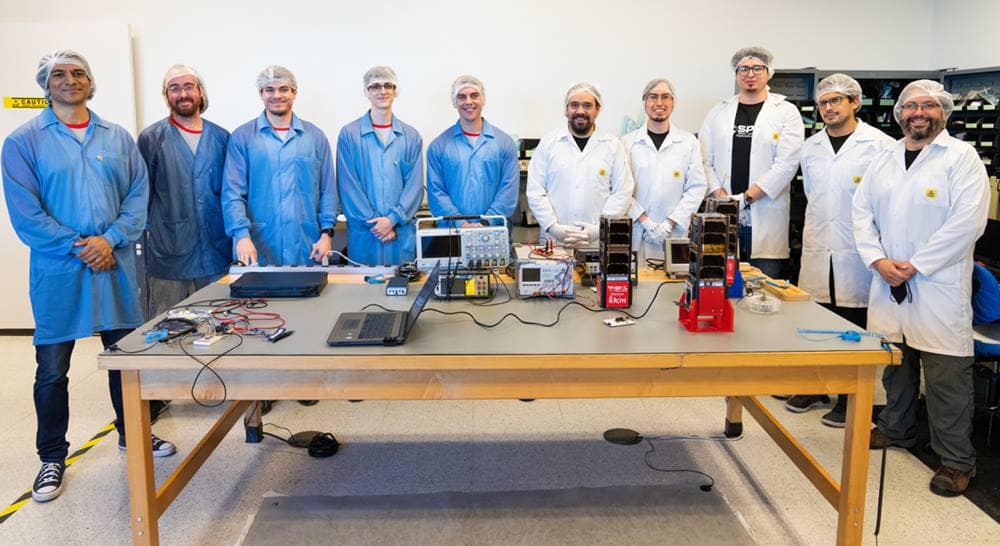 The three satellites being launched have different missions, Diaz said. One CubeSat, known as Suchai 2, is primarily designed to detect UV contamination from sources such as the increasing number of LED streetlights, to gauge whether the light is disrupting Chilean observatories that take advantage of the extremely clear skies of the Atacama Desert.

Suchai 3 is on a communications mission, demonstrating an Internet of Things transceiver.

The third satellite, known as PlantSat, will investigate the endurance of a plant known as Tillandsia in the space environment.

Each of the satellites will include SAIL-developed and -calibrated magnetometers which, by measuring faint changes in magnetic fields in space, deepen our understanding of magnetic storms, or rapid magnetic field variations in the Earth's ionosphere, thermosphere and magnetosphere system. Such storms can disrupt radio communications, GPS signals, and satellite electronics. Understanding them better will help model the storms and prepare for their occurrence appropriately.

Suchai 2 and Suchai 3 will also carry Langmuir probes. These probes were built and programmed by Embry-Riddle Engineering Physics Ph.D. students Henry Valentine and Nathan Graves, based on a design by a SAIL graduate, Liam Gunter.

According to Graves, the probes measure absolute ambient plasma density. In the low-Earth orbit of the cubesats, measurement of this parameter is important to study a range of ionospheric phenomena, including plasma bubbles and polar cap patches, Graves said.

Two more SAIL-built probes are slated to launch aboard 1.5U LLITED CubeSats built by Aerospace Corporation in a July 15 to Aug. 15 launch window.

Dr. John Hughes, chair of the Physical Sciences Department, said student involvement in such projects presents a huge benefit to the students' education.

“Opportunities like this are what really set Embry-Riddle and our Engineering Physics program apart,” said Hughes. “Going beyond 'rocket science,' they are 'space science' and showcase our commitment to outstanding education and research, both for undergraduate and graduate students.”