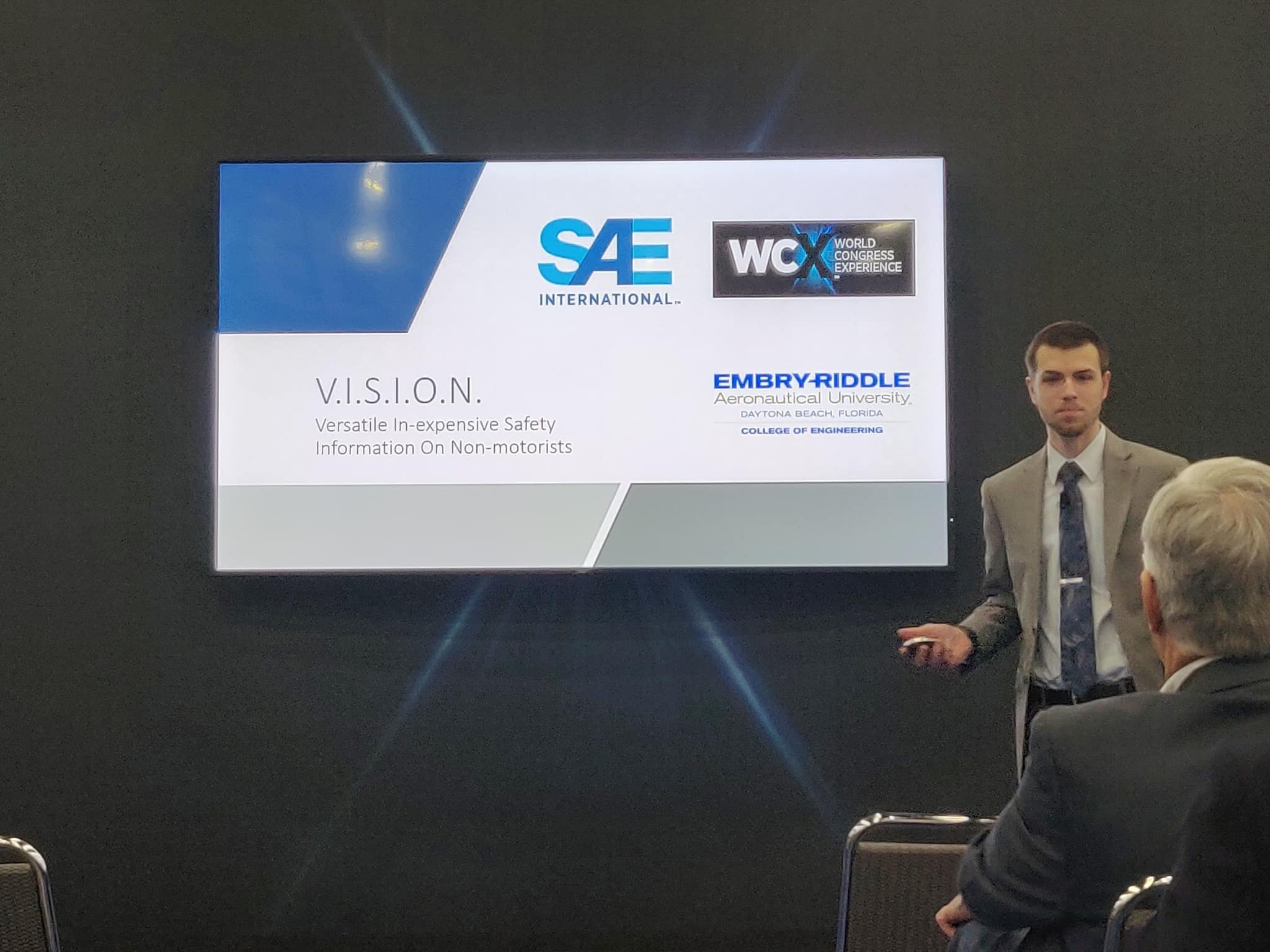 Senior Mechanical Engineering students Andrew Ferree and Zack Saidman want to make the streets safer, and they believe they’ve figured out a way to accomplish that goal for a grand total of 23 dollars.

That is the cost of the prototype they designed which won them second place at the Society of Automotive Engineers (SAE) International’s Connected Vehicle Challenge 2019, on April 11. The device, which would become even cheaper to manufacture once production levels grow beyond the duo’s initial 1,000-unit projection, is meant to “talk” through radio signals to nearby devices mounted on bicycles and attached to pedestrians, warning of upcoming hazards to prevent collisions — an occurrence, the students learned, is even more common than they imagined.

“Our most interesting discovery was how many cyclists are injured each year by vehicles: 45,000 injuries and 840 deaths,” Ferree said. “And 5,000 of the injuries are to children 14 and younger. It’s pretty insane.”

There are systems already on the market that are similar to their device, the students admit, but for the most part they’re simplistic and imperfect. Rather than interacting with drivers, for instance, current devices are meant mostly for cyclists, who might only receive alerts in emergency situations after it’s already too late to swerve out of the way. A couple of high-end auto makers also incorporate similar communication systems into their vehicles, but the devices needed to pick up the signals they cast cost hundreds of dollars, and so the technology has yet to be embraced by the public.

That is where Ferree and Saidman’s device is so different. In preparing their project, they focused on cost and conducted market research. They talked to consumers and prioritized simplicity, and it was that business perspective that made their work stand out at the competition.

“You can sit in a corner with the smartest professors ever and come up with the best idea,” Saidman said. “But—“

“If you can’t market it, it’s kind of worthless,” Ferree added.

Every Car, Every Street Corner

Ferree and Saidman dream big. They want to see their device become an automotive industry standard, and they want to produce them so inexpensively that almost every consumer can afford one. Once all new cars are equipped with their devices, and every cyclist owns a transmitter, communication on our roadways will open up, they say. Drivers will be notified far before approaching a cyclist who might be obscured around a bend or corner, and the accident rate will dwindle.

But all that — at least for the time being — is endgame-type stuff. Instead, right now, they are thinking “small-scale” implementation.

“We talked to Campus Safety: What if these devices were part of what you paid for when you bought a parking pass?” Saidman asked.

The two imagine a campus where cars, bikes, skateboards and even transmitter-equipped backpacks “talk” to each other, simultaneously alerting the students carrying them, and those behind the wheel, of nearby hazards. They imagine their devices tacked onto “Children at Play” signs around town, hooked to dog collars and adopted by homeowners associations. They see a path toward growing to the city- then state-level.

“Regional demos are more attainable, at least in the short-term,” Saidman said. “The key is adoption. That’s one of the biggest hurdles.”

You can sit in a corner with the smartest professors ever and come up with the best idea, but if you can’t market it, it’s kind of worthless.

Evolving from their work in the EcoCAR competition, Ferree and Saidman’s project was shaped, in part, by Dr. Mike Bowers, director of the Embry-Riddle Center for Entrepreneurship, and Dave Spitzer, Research Engineer and Steering Committee member for the Center for Entrepreneurship. Dr. Charles Reinholtz, professor of mechanical engineering, also influenced their work.

“I am exceedingly proud of how Andrew and Zack represented Embry-Riddle,” Reinholtz said. “We are one of only 12 universities invited to participate in EcoCAR, the world’s largest and most complex student competition. Our success there, as well as in the SAE Connected Vehicle Challenge, are examples of how we are driving innovation in the rapidly emerging connected and automated vehicle industry.”

After graduation in May, Ferree will pursue his master’s degree while Saidman will start a job as a systems engineer at Raytheon, working in missile-defense. They plan to continue their research using the $5,000 prize from the conference, and Ferree will submit a new iteration of their project — this time with a working prototype — to the TREP Expo, this fall.

Just as rewarding to the students as the contest itself, though, was simply being able to attend the SAE World Congress Experience and talk to the exhibitors. They met potential mentors, they say, saw things that blew their minds, even went for a ride in an unmanned car.

“We met companies that did stuff we didn’t even know existed,” Ferree said.

“At these conferences, you see some of the most amazing things anyone has ever made,” Saidman added. “Regardless of the prize and the winning, it was absolutely awesome just to go.”