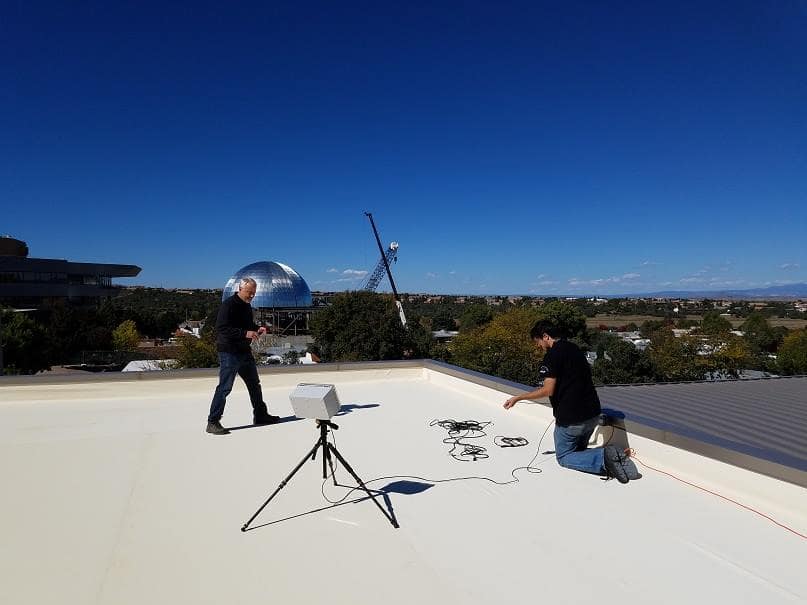 The passive rooftop drone detection system at the Prescott Campus

Share:
Wireless nanoscale smart sensors that continuously monitor and strengthen composite materials, fundamental insights that could save U.S. aircraft carriers millions of dollars in fuel costs, a drone-detection network and a strategy to more accurately predict space weather may all be coming soon from Embry-Riddle, thanks to new university seed grants.

“Embry-Riddle has a goal to become one of the leading technological universities in the nation by investing in research,” said Maj Mirmirani, dean of the Florida-based College of Engineering, who also serves as Interim Senior Vice President for Academic Affairs & Research. “The ARI awards are intended to help faculty members get promising research concepts off the ground so they can more effectively compete for external funding.”

The ARI review process was rigorous and competitive: Some 50 pre-proposals were submitted, the university reported. Each submission was evaluated by three different reviewers across the Worldwide, Prescott and Daytona Beach campuses. Twenty-one submitters were then asked to proceed with full proposals, which were subjected to further review. Eight finalists presented their ideas in a structured review setting based on specific criteria.

“The quality of proposals was outstanding,” Mirmirani said. “Faculty participation was very encouraging.”

The stiffness and strength of laminated, fiber-reinforced plastic composite materials have made them an appealing replacement for metal in aircraft such as the Boeing 787 and in civilian infrastructure. Unfortunately, composite layers can pull apart, crack, or otherwise fail as delamination occurs, raising safety concerns. Some traditional technologies for monitoring the structural health of composites are bulky and expensive, while others, such as fiber-optic sensors bonded into composites, can reduce the strength of the material.

Marwan Al-Haik, a professor of aerospace engineering, teamed up with College of Engineering colleagues Dae Won Kim, Sirish Namilae, William Barott, Jeff Brown and Fady Barsoum to propose a different approach to monitoring composite materials. They will incorporate wireless smart sensors into composite materials by growing nanoscale zinc-oxide nanowires directly onto carbon fibers. Due to the nanowires’ inherent “piezoelectricity,” they will generate an electrical charge in response to mechanical stress, acting as embedded sensors to provide structural information in real time. The nanowires will also help strengthen the material, Al-Haik said.

If they can harness a fundamental physical phenomenon – the thin layer of turbulence that forms whenever air flows over an airplane, water slides over a ship, wind blows over the land or sea, or blood moves through our veins – Ebenezer Gnanamanickam’s research team might be able to improve the efficiency of flight, and more.

Gnanamanickam, an assistant professor of aerospace engineering, worked with Richard Prazenica and Mark Balas to propose “Adaptive Control of Fluid Flows” – an ambitious effort to reduce drag caused by turbulence at the surface of a speeding aircraft. Reduced drag could save jet fuel and reduce greenhouse gas emissions, the researchers noted. U.S. air carriers alone used more than 16,200 million gallons of fuel at a cost of $2.85 per gallon in 2014, according to the Department of Transportation. “If the fuel consumption was reduced by just 0.1%, that would translate into a total savings of millions of dollars per year just for U.S. air carriers,” Gnanamanickam noted.

The concept would reduce drag through a feedback loop capable of adapting to changing air-flow conditions through an “adaptable” controller. Researchers will explore this concept within a controllable boundary layer facility on the Daytona Beach campus. Achieving control of turbulent boundary layers could have broad applications in fields ranging from aerospace engineering to naval architecture and meteorology.

A system to detect, classify and identify unmanned aerial systems (UAS) in sensitive environments was proposed by the Embry-Riddle ICARUS Research Group, based at the Prescott, Arizona, campus. The “Drone-Net” could become increasingly important for ensuring air safety, given that the NATO Industrial Advisory Group predicts some 30,000 drones could be flying over the United States within the next decade. Unregistered drones “can pose a substantial security threat,” researchers noted.

ICARUS Research Group members Samuel Siewert, an assistant professor of software engineering, along with Stephen Bruder, Mehran Andalibi, Iacopo Gentilini and Jim Weber, will initially use a network of passive rooftop sensors that capture electro-optical and infrared data to detect objects in the sky. A previously developed imaging system for tracking marine traffic will be adapted to visualize UAS activity. Once the detection system has been fine-tuned, the researchers plan to compare and validate their EO/IR data with information from other passive as well as active sensors, based on RADAR, LIDAR (Light Detection and Ranging) and Automatic Dependent Surveillance – Broadcast or ADS-B devices, which use satellite information to periodically announce an aircraft’s location.

Ultimately, the team hopes to populate a database of drone “fingerprints” that would allow law-enforcement and regulatory agencies to distinguish responsible UAS operators from potentially hostile ones. “The capability can be used to test and evaluate commercial drone detection systems being evaluated by the FBI at airports,” the researchers wrote, “and to make policy and technology recommendations to key agencies (FAA, DOT, DHS) for drone integration into the national air space.”

In 1859, highly charged particles bombarded the Earth following a massive solar eruption, or coronal mass ejection, and a storm of cosmic radiation. The Carrington event, named for astronomer Richard Carrington, triggered one of the strongest geomagnetic storms in recorded history. If another Carrington-scale event hit the planet today, Embry-Riddle researcher Katariina Nykyri said, it would wipe out all modern power infrastructure, radio communication, electronic devices, ship navigation, and aircraft and satellite communications.

In 2012, an event similar to the Carrington space-weather storm barely missed the Earth.

For their ARI project, Nykyri, a physics professor, and Bogdan Udrea, an associate professor of aerospace engineering proposed to “make Embry-Riddle the world’s leader in real-time space weather prediction.” Currently, Nykyri explained, the National Oceanic and Atmospheric Administration Space Weather Prediction Center can provide a 3- to 4-day prediction of large-scale events headed toward Earth. Predictions are based on averaging 27 days’ worth of magnetic field measurements from the sun’s surface, so they are an approximation. The predictions can also miss the sudden development of active regions on the sun as it rotates.

Nykyri’s specific strategy remains confidential for now, but it involves a plan for capturing much more data from many key locations around the sun. With multiple sources of data and computer code to describe three-dimensional, magnetic/hydrodynamic events in space, “It should be possible to predict events much earlier and more accurately,” she said. In September 2016, Nykyri published game-changing insights in Nature Physics on how solar wind (plasma) gets whipped into waves as it hits the magnetic bubble around the Earth. The instability heats ions and transfers energy across the Earth’s magnetic boundary, she reported.