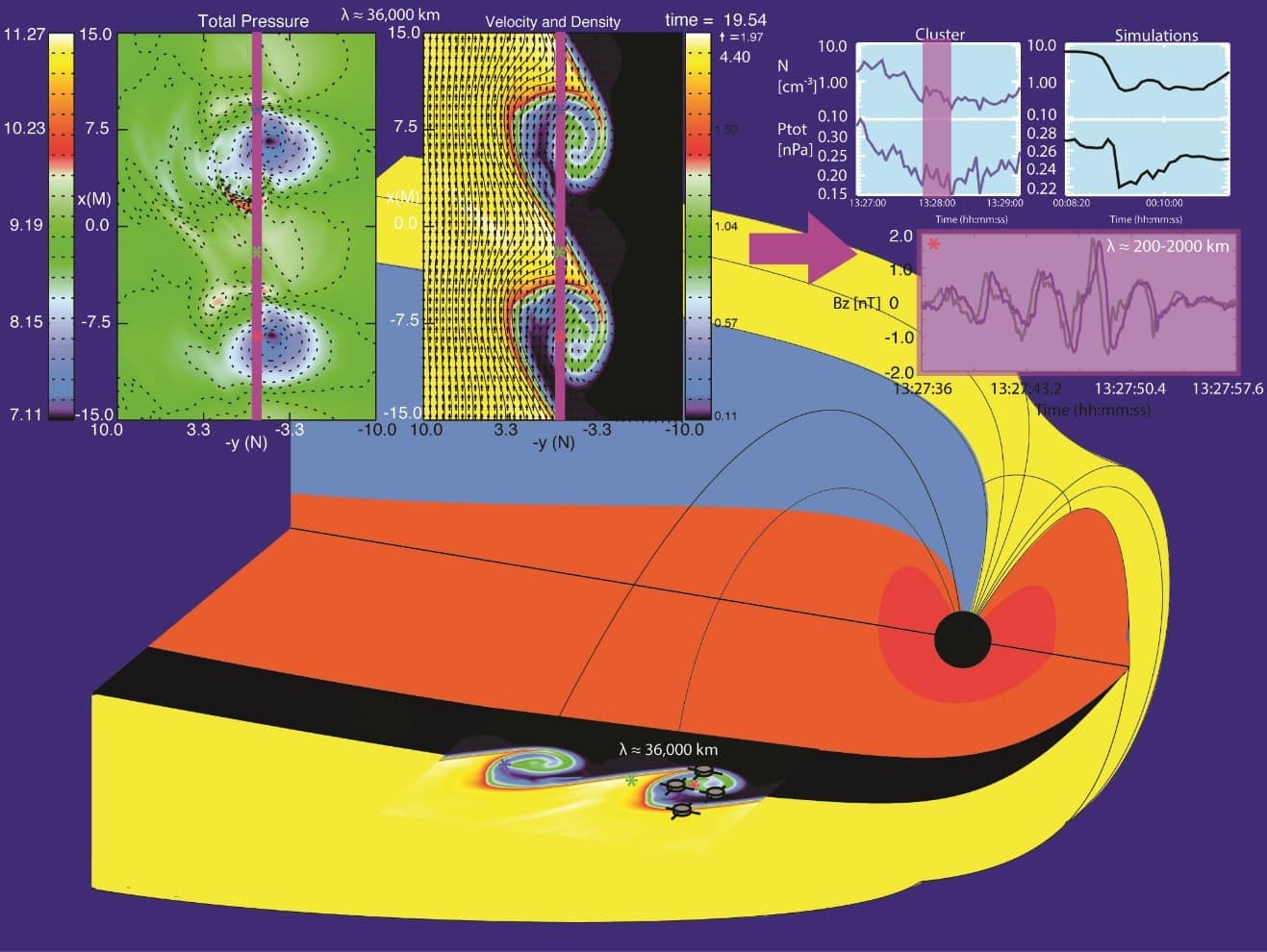 “If we could utilize this mechanism effectively in the high density laboratory plasmas by constructing appropriate transport barriers, we could create energy from water.” - Dr. Katariina Nykyri, Embry-Riddle’s Physical Sciences Department and Center for Space and Atmospheric Research

A new study by researchers at Embry-Riddle Aeronautical University, funded by the National Science Foundation, has identified for the first time a process by which the solar wind is heated along extended regions of the Earth’s magnetic shield as it penetrates through this barrier. The process may have parallels to the unsolved problem in astrophysics of how the solar corona is heated. It may also be helpful for understanding the cross-scale transport of energy in man-made plasma devices that may lead to the creation of practical fusion power.

In 2011, Ph.D student Thomas W. Moore, at that time a master’s student, began working with Dr. Katariina Nykyri, a Professor of Physics in the Physical Sciences Department and member of Embry-Riddle’s Center for Space and Atmospheric Research in Daytona Beach, analyzing data gathered from four European Space Agency Cluster spacecraft. The team, including post-doctoral researcher Andrew Dimmock, created numerical simulations that aid in understanding the signatures in the spacecraft data

and utilized multi-spacecraft techniques for plasma wave mode identification. For 16 years, these four satellites have been investigating the Earth's magnetic environment and its interaction with the solar wind in three dimensions.

“In space, the fast streaming plasma (solar wind) originating from the sun creates large “space hurricanes,” called Kelvin-Helmholtz (KH) waves, at the boundary of Earth’s magnetic barrier,” said Nykyri.  “The KH waves typically have wavelengths in range of 20,000-40,000 km and a 1-3 minute period, and as they steepen and roll-up like ocean waves they can transport solar wind plasma into the magnetosphere.”

The KH waves are a direct result of the way our planet fits into the larger solar system. Planet Earth is a gigantic magnet and its magnetic influence extends outward in a large bubble called a magnetosphere. A constant flow of particles from the sun (solar wind) blows by the magnetosphere–not unlike wind blowing over the surface of the ocean. During certain situations, particles and energy (plasma) from the sun can breach the magnetosphere, crossing into near-Earth space. (source - http://phys.org/)

“Within plasma physics, this is a significant discovery,” said Moore. “Our understanding of this cross-scale energy transfer process came together gradually. There was not really an “aha” moment, but the implications of our work became apparent when we realized how all the pieces of our research fit together.”

“We found that the giant KH waves can radiate ion-scale waves, or smaller “space tornadoes,” that have sufficient energy to heat the plasma to the energies we observed,” said Nykyri. "This process transfers the kinetic energy from the solar wind into the heat energy of magnetospheric ions, explaining the rapid temperature increase through Earth’s magnetic barrier. If we could utilize this mechanism effectively in the high density laboratory plasmas by constructing appropriate transport barriers, we could create energy from water.”

Plasma is not a gas, liquid or solid, but the fourth state of matter - a gas that is so hot that some or all its constituent atoms are split up into electrons and ions (charged atoms or molecules), which can move independently of each other. It is estimated that 99.9 percent of the visible Universe is made up of plasma.

Technically, the study shows that the Embry-Riddle researchers have described for the first time the process of how energy is transferred from magnetohydrodynamic scale Kelvin-Helmholtz (KH) plasma waves (with a wavelength of 36,000 km) to ion-scale magnetosonic waves that has sufficient Poynting flux to explain the observed heating from magnetosheath (shocked solar wind) into the magnetosphere. Scaling of this mechanism to typical coronal parameters suggests that it may also help explain the heating of the solar corona as well as play role in other astrophysical and laboratory plasmas with a velocity shear.

Moore and Nykyri will be seeking funding to continue research into whether this cross-scale transport of energy continues all the way to the electron scales and how much energy can be transferred to the ion scales in laboratory plasmas.

About Space Physics at Embry-Riddle

Embry-Riddle’s Bachelor of Science in Space Physics is the only degree program of its kind in the nation and is housed in the College of Arts & Sciences at both the Daytona Beach, Florida and Prescott, Arizona Campuses. The program is designed for students with superior math and science skills and that have a strong interest in space. Graduates emerge with the skills needed to excel in graduate studies, to contribute to the growing commercial space movement in a meaningful way, or to begin a career in applied physics. Students work under the direction of renowned physicists who share their passion for the universe. A space physics degree provides a strong experimental physics background, so graduates emerge from the program ready to work in research or within the burgeoning commercial space industry.

Program graduates are also well suited for pursuing careers in medical physics, biophysics, plasma physics and in the military and security sectors.

About the National Science Foundation

The National Science Foundation (NSF) is an independent federal agency created by Congress in 1950 "to promote the progress of science; to advance the national health, prosperity, and welfare; to secure the national defense..." With an annual budget of $7.5 billion (FY 2016), NSF is the funding source for approximately 24 percent of all federally supported basic research conducted by America’s colleges and universities.