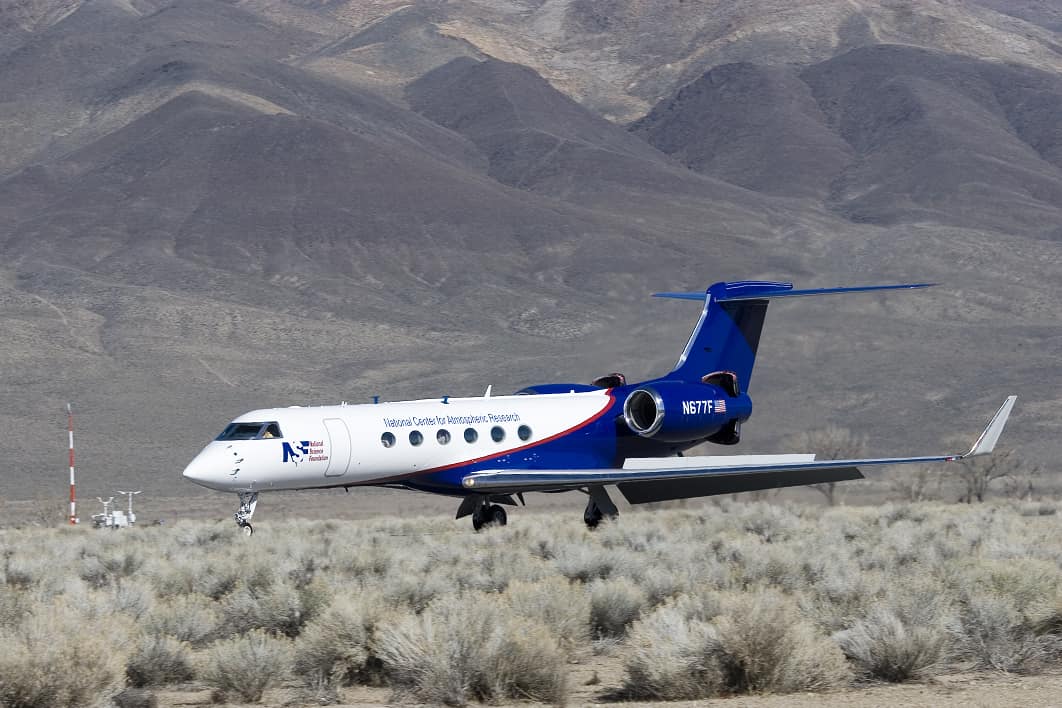 The National Science Foundation’s (NSF) HAIPER aircraft is a highly-modified Gulfstream V business jet built to enable scientists to collect data from near the earth's surface to the tops of storms and to the lower edge of the stratosphere. Embry-Riddle researchers will use the aircraft to better understand atmospheric waves, in an NSF-funded project. (Photo: University Corporation for Atmospheric Research)

Improving air travel safety and enhancing climate change models are just two of the benefits to better understanding the mechanics of atmospheric waves, and faculty at Embry-Riddle Aeronautical University are pioneering research to do just that.

The research, recently funded by a $455,000 grant from the National Science Foundation (NSF), will focus on the “convective gravity waves” (CGWs) created in the lower atmosphere by thunderstorms. Such waves can travel vertically up to space and thousands of miles horizontally.

“Understanding the types of waves that are created by these thunderstorms, and where in the atmosphere they might create turbulence, has important safety and scientific considerations,” said Chris Heale, research associate in Embry-Riddle’s Department of Physical Sciences.

To conduct the research, the co-principal investigators from Embry-Riddle, University of Miami, University of Colorado and Global Atmospheric Technologies and Sciences (GATS) will use instruments on board the NSF/NCAR Gulfstream-V High-Performance Instrumental Airborne Platform for Environmental Research, generally known as the GV, “G Five.”

The crew of the GV will repeatedly fly out of Omaha, Nebraska, during the summer of 2022, taking off at twilight and flying through the formation of the convective gravity waves and their propagation and dissipation throughout the stratosphere. According to Heale, the GV pilots have extensive expertise flying in very turbulent areas.

“We plan to fly routes that get as close as possible to the storms without jeopardizing the safety of the aircraft or crew,” Heale said.

As Heale explained, as convective gravity waves travel away from a thunderstorm, they carry energy and heat away, depositing it in other parts of the atmosphere.

“These waves have a significant influence in defining the temperature and wind structure in the Earth’s atmosphere,” said Heale.

Heale also explained that atmospheric waves break in the atmosphere in the same way that ocean waves break on the shore, creating air turbulence that can be felt on a flight.

“If you are floating in the ocean away from the shore, a wave simply causes you to bob up and down as it passes you,” Heale said. “However, if you are standing close to the shore and a breaking wave hits you, it imparts a force on you and can knock you over. This is the wave depositing its energy and momentum onto you. The same thing happens when these atmospheric waves break.”

According to the research grant proposal, “no ground-based, airborne or satellite measurements have ever quantified CGWs from their generation by deep convection and their propagation, dissipation and responses throughout the stratosphere.”

In addition to providing valuable information about CGWs and their effects on the atmosphere, the research will promote STEM education. The researchers involved will present talks at local schools about the science of thunderstorms and their effects on higher altitudes, and about the project’s ultimate benefit to society. The project will also help train three graduate students, a postdoctoral student and two young investigators in data processing and analysis and modeling related to gravity wave dynamics. The graduate students will be involved in running and interpreting the computer models using Embry-Riddle’s Vega supercomputer and possibly other supercomputers, Heale said.

“This research will allow us to better predict where these waves can create turbulence, which will help aviation safety,” said Heale. “It will also help us determine how these waves can influence the overall temperature, wind and chemical constituent structure of the Earth’s atmosphere.”