Their mission? Fly a weather balloon and a half-dozen drones from ground level, up to 400 feet. Capture air-quality and meteorological data. Test the performance of low-cost, lightweight atmospheric and air-quality sensors attached to the drones versus heavier, more costly sensors on the balloon.

If the low-cost sensors yield results comparable to their high-end counterparts, Embry-Riddle’s specially equipped fleet of drones – combined with originally developed software and student know-how – could vastly improve both weather predictions and our understanding of airborne pollutants.

The research draws expertise from three different colleges at the Daytona Beach Campus, and soon, an additional project will take place at Embry-Riddle’s Prescott, Arizona, campus.

“Embry-Riddle’s ability to conduct this type of study using a highly coordinated fleet of specially equipped drones is unique and may be a first,” said Dr. Marc Compere, associate professor of Mechanical Engineering in the College of Engineering, and director of the Energy Systems Lab.

Compere’s open-source Mobility Virtual Environment (MOVE) software also makes it possible to safely monitor a complex multi-drone operation and then swiftly analyze the resulting data. “If the performance of lower-cost sensors attached to drones can be validated,” he said, “we could improve the resolution of atmospheric measurements by orders of magnitude, compared to conventional methods.”

Not only that, but the drone-based approach “would provide insights to the under-sampled lower portion of the atmosphere, across both the horizontal and vertical planes,” said Dr. Kevin Adkins, associate professor of Aeronautical Science, College of Aviation – an expert on unmanned aerial systems (UAS) and director of the UNmanned Vehicle and Atmospheric Investigation Lab. Such insights could inform existing aviation operations as well as the development of urban air mobility vehicles.

Typically, Adkins noted, meteorological observations are based on data captured by weather stations located miles apart. Weather balloons, satellites and commercial aircraft also provide some information. “We believe we can increase the resolution of those methods,” Adkins said, “meaning that we can make more observations in the spaces between these fixed observation points, and in the region of the atmosphere where humans live and future aircraft operations will take place.” 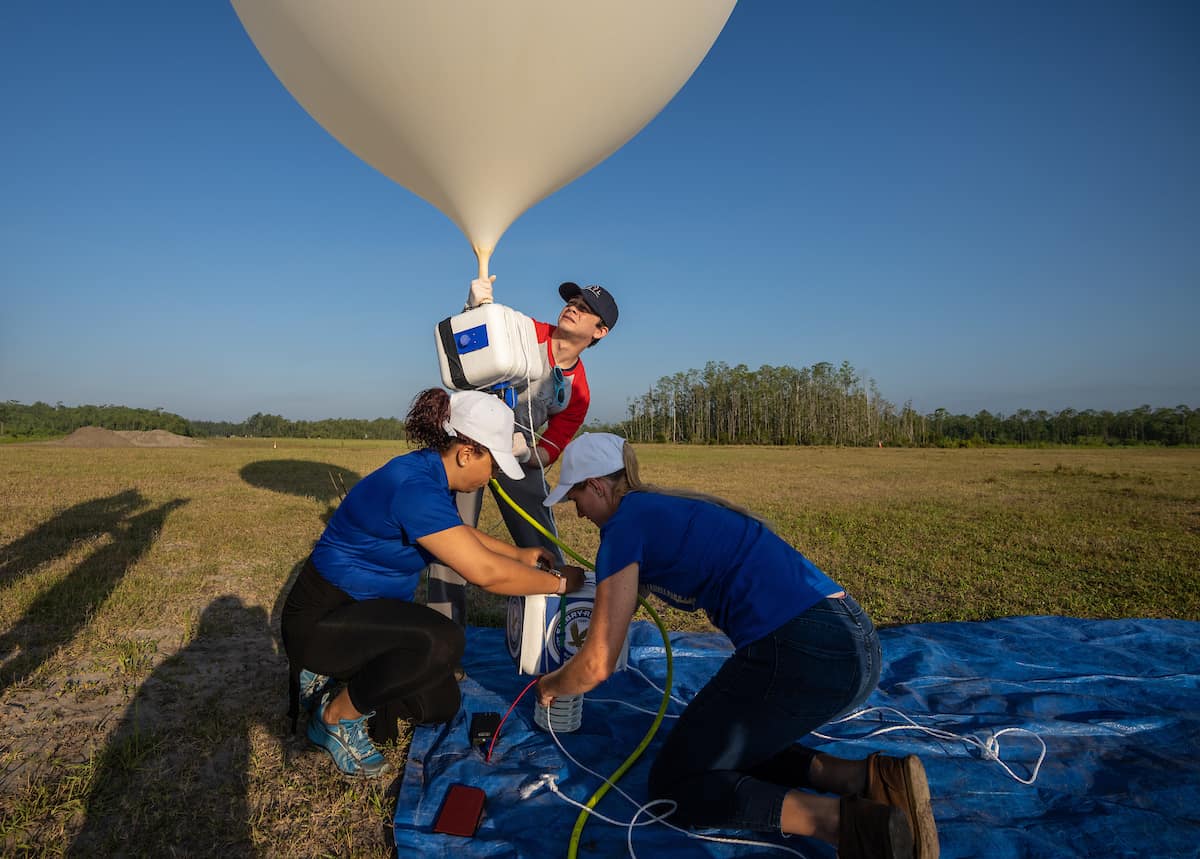 Low-cost sensors attached to drones could also provide new insights to the origin and distribution of atmospheric pollutants, particularly in remote or underserved regions, said particulate matter expert Dr. Marwa El-Sayed, assistant professor of Civil Engineering and director of Embry-Riddle’s Sustainability and Environmental Engineering Lab. For the recent Embry-Riddle experiment, El-Sayed, in the College of Engineering, prepared instruments to be simultaneously used on board the weather balloon – provided by the Space and Atmospheric Instrumentation Lab (SAIL), in the College of Arts and Sciences – and mounted on the drones. Additionally, SAIL is involved in a five-year Air Force Office of Scientific Research- funded project wherein students are launching monthly high-altitude balloons to study particulate matter and turbulence in the stratosphere.

Initially, her portion of the research will focus on particulate matter in the atmosphere, which can come from natural or human-caused sources. (In the future, she plans to expand the work to include various other pollutants.) The U.S. Environmental Protection Agency (EPA) has found that very tiny, aerodynamic particulates, less than 2.5 microns in size, are harmful to humans, if inhaled, and equally harmful to the environment, she said. This is why particulates are regulated under the National Ambient Air Quality Standards. Currently, El-Sayed said, the EPA uses “very hefty, expensive equipment” to monitor particulate matter, usually in major urban areas – an inequitable situation for those in rural and/or lower socioeconomic communities.

The low-cost sensors used in the Embry-Riddle project cost a couple-hundred dollars, compared to thousands of dollars for the higher-end, heavier sensors. “This is the future of combating air pollution,” El-Sayed said. “If they work, you could get plenty of the low-cost sensors and implement them in finer resolution to learn about the air quality in any area of interest.”

Today’s aviation leaders, who are increasingly focused on sustainability goals, are also keenly interested in monitoring air pollutants, she noted.

The recent experiment leveraged the weather balloon as well as four multi-rotor and two fixed-wing UAS, Adkins said. Compere’s software is streamlining data analysis on the back-end. “Most of the time, researchers have to analyze data from these types of projects the old-school way, with spreadsheets, or by piecing it together in their brains,” Adkins said. “Marc has created effective analysis software through open-source architecture.”

Although the researchers don’t yet know the outcome of their experiments, the scope of the work keeps expanding. Improving monsoon predictions will be the focus of additional investigations by Dr. Ronny Schroeder, assistant professor of Geographic Information Systems, with colleagues at Embry-Riddle’s Prescott Campus. (Look for a follow-up news story on that project.)

“Students make it all work,” El-Sayed said of the research. “None of it would happen without the dedication and good ideas of Embry-Riddle students.”