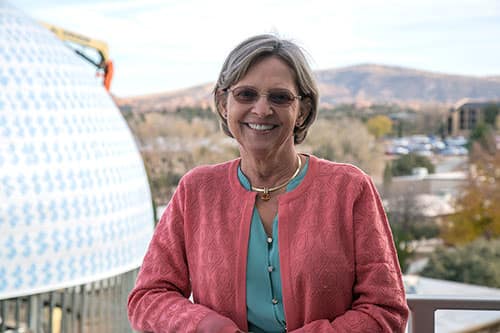 “The campus was so small, there wasn’t even a place to eat lunch,” recalls Tonia, who now serves on the Prescott Campus’ Board of Visitors. “I had to pack him his lunch and he would eat it in the car.”

At the time, the campus had fewer than 300 students and operated out of a cluster of block buildings. Now, it boasts a student body of more than 2,400 students, 25 degree programs, and has added several new buildings, such as the new STEM (science, technology, engineering and mathematics) Education Center, set to open in 2017.

Embry-Riddle Prescott is part of my family and part of my history. It’s something that I love and am really proud of.

Tom eventually completed his degree, and in 2004, Tonia witnessed her daughter, Marquita Fortner Pfannenstiel (’04, PC), cross the stage to accept her Embry-Riddle diploma. Incidentally, Marquita holds the title of first Legacy Graduate (child of an alumnus) at the Prescott Campus. She is a member of the U.S. Navy Reserve and is a market group manager in revenue management for Delta Air Lines.

“I have watched the evolution of our campus, instructors and our students and I am thrilled and impressed,” Tonia says.

In a tangible expression of her support and enthusiasm for the Prescott Campus, Tonia recently established the Tonia Knight Fortner Women and STEM Endowed Scholarship, which is funded in part by a planned gift.

“Embry-Riddle Prescott is part of my family and my history,” Fortner says. “It’s something that I love and that I am really proud of.”

The scholarship is for full-time, undergraduate Prescott Campus students with financial need, who are pursuing degrees in a STEM field. There is a preference for female students and those who are the first in their family to attend college.

“As an incredibly active member of our board of visitors, Tonia Fortner provides advice, counsel and support to our leadership here at the campus,” says Prescott Campus Chancellor Frank Ayers. “The STEM Women’s scholarship she has created will ensure many more bright young ladies, like her daughter Marquita, will attend Embry-Riddle and go on to great careers of significance in the STEM fields.”

The mother of three daughters, Tonia says she’s excited to see more female students at Embry-Riddle, which is something for which she has long advocated. Since 2010, the number of women students at the campus has grown from 17 to 26 percent.

Born in West Virginia, Tonia was raised by her grandmother, who ran her own publishing business. After moving to Prescott, Tonia worked at a greenhouse and became friends with then Embry-Riddle physics professor Fielding McGehee. Renowned for his “green thumb,” McGehee would salvage half-dead plants headed for the dumpster and plant them on campus, Tonia recalls.

“Fielding and his wife Helen were like grandparents to my kids,” she adds. “They were both good friends and dear family members.”

In 1980, McGehee loaned Tonia $20,000 to open a wholesale nursery, Willow Creek Greenhouse. The business prospered, employing more than 200 people, before it sold in 2002.

In 2015, she honored the memory of her friend, Professor Emeritus McGehee, with a gift to name the physics laboratory at the STEM Education Center after him. McGehee died in 2009.

Tonia, who earned her Bachelor of Science degree in agribusiness in 2004, hopes her most recent gift will allow generations of women to study the STEM subjects they love with less financial strain.

“I strongly believe in the growth and power of an endowment, and I believe it can help me build another part of my personal legacy,” Tonia says.