Former CEO of Spirit Airlines, Baldanza is credited for bringing the “ultra-low-cost carrier” model to North America — a strategy that drew much negative attention when first introduced to fliers. 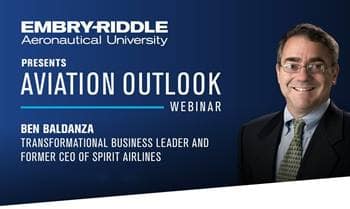 "It was like we had done something terrible to the planet — it was amazing,” he said, reflecting on when news broke of his company’s decision to slash ticket prices while adding ancillary fees for services like baggage. “I was just surprised at the strong media reaction … but if anything, that grew our conviction further.”

Twenty years later, he said, the model is still in practice today. “Because it makes sense.”

That same conviction in striving for efficiency above all else is what will save airlines as they attempt to navigate the market changes caused by the Covid-19 pandemic, Baldanza added.

“This is an industry that has been marked by massive change over the last number of decades,” he said. “Every external shock has changed this industry, and Covid will do the same thing.”

How the industry changes, however, remains an opportunity. Uncertainty, Baldanza said, leads to new questions, which leads to new ways of thinking.

“The airlines that make smarter and more proactive decisions … those airlines are going to emerge from this relatively stronger,” he said.

The seventh featured guest in Embry-Riddle’s free and interactive Aviation Outlook webinar series, Baldanza served as the CEO of Spirit Airlines from 2005 to 2016. He is currently owner and CEO of Diemacher LCC, a business consulting firm, and serves on the boards of JetBlue Airways, GoAir in India and Six Flags Entertainment.

In the next free and interactive Aviation Outlook webinar event, Embry-Riddle’s deans of Aviation welcome captain Alyse Adkins (’13) and captain Michael Dee (’97). Adkins is a flight qualified supervisor on the Boeing 757 and 767 at UPS. The managing director of flight operations for Republic Airways, Dee oversees 2,000 professional pilots and a fleet of more than 200 aircraft. The two Eagle alumni will discuss the current state of aviation and what the future holds for the industry. Register now to reserve a virtual seat at the event.

None of the leadership positions he has held throughout his career, though, would have been available to him had he been afraid to lean into the uncertainty of a new business model at Spirit.

“But once we made that decision, it was amazingly mind-opening,” Baldanza said.

Not only did the model prove to be successful for the airline, but it also made air travel possible for passengers who could not afford it previously. It gave them choices.

“A world where there’s Spirit, and JetBlue and Delta is a world that’s better than all JetBlue, all Spirit, all Delta,” he said. “We have choices in all the kinds of things we do, and we should for our airlines, also.”

An avid fan of board games, Baldanza sees business — and especially the struggles that airlines face in normal as well as extraordinary conditions, such as those of a pandemic — as an exercise in strategy as well as creativity.

How are resources best allocated? How does one make the biggest impact in the fewest number of decisions? What decisions moves one around the board fastest?

“Whether you win or lose the game is a function of how well you played the game,” he said. “The airlines thinking like that now are the airlines that will be the real winners in the next decade.”

The Aug. 26 webinar featuring Ben Baldanza is available for playback online. For recaps on prior guests, visit the Aviation Outlook website.

Boeing Exec: For a Dream Career, Follow These Tips