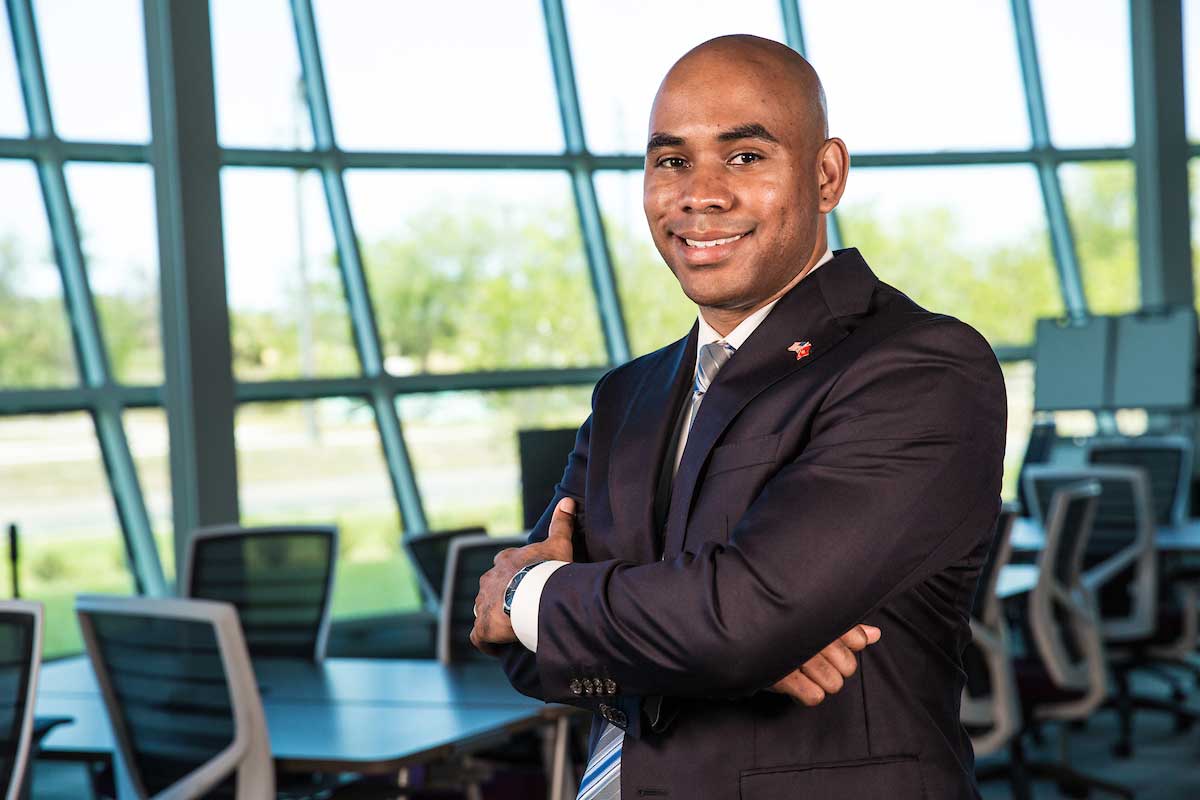 Technology entrepreneur and Embry-Riddle Aeronautical University alumnus Reamonn Soto has secured a $743,200 National Science Foundation (NSF) award for his company, Sensatek Propulsion Technology. His latest grant brings his grand total in seed funds to nearly $1.5 million, all of which has allowed him to add jobs to Central Florida’s economy – a key goal of the Embry-Riddle Research Park, where Sensatek is a fledgling business.

“We’re obviously proud of him as an alum who has taken advantage of what the Research Park has to offer and has been so successful,” said Dr. Stephanie Miller, executive director of technology transfer and research park initiatives for Embry-Riddle. Miller said that Sensatek will be adding two full-time employees to its current roster of four, as well as moving from a small incubator space in the Research Park’s MicaPlex facility to a 1,000-square-foot tenant space, where it will advance into research and development and production.

“Reamonn is a perfect example of how the Research Park is supposed to work,” Miller said.

“Sensatek is precisely the type of local, innovative startup company that drives progress and enterprise in America and creates new jobs in Florida," said Waltz. "Sensatek has demonstrated the economic progress in Volusia County that Embry-Riddle Research Park contributes to every day. I know Reamonn Soto will continue to serve as an inspiration to the many bright minds at Embry-Riddle and I look forward to what the future holds for both Sensatek and Embry-Riddle.”

Soto, from an early age, showed entrepreneurial spirit. In eighth grade, he says he “recruited a team of associates” from among his classmates to sell personalized accessories through product catalogs. In high school, he built and repaired computers in his garage. After college and serving as a U.S. Marine, Soto owned and operated an automotive shop.

He started Sensatek after working for the Florida Small Business Development Center and while earning a master’s degree in aeronautics at Embry-Riddle’s Worldwide Campus.

“Reamonn took what started out as a student project,” to commercialize wireless ceramic sensors that can accurately monitor the temperatures within gas turbines, said Miller, “and transitioned it into a startup company.”

The patented technology that Sensatek has licensed allows gas turbine operators to prevent failures and optimize engine performance by modifying temperatures according to precise monitoring. Currently available sensors cannot tolerate the highest temperatures within gas turbines – so temperature readings are captured in the turbine’s cooler locations. At the same time, higher temperatures, while more efficient, can damage the turbine, so close monitoring is key.

Soto’s company is commercializing a different type of sensor, originally developed at the University of Central Florida, based on a polymer-derived ceramic material that tolerates high temperatures well. Soto’s wife, Azryana, is responsible for ongoing materials research into the ceramic used for the sensors and the bonding material needed to affix them to the turbines.

Soto said the consensus from turbine manufacturers he has interviewed is that Sensatek’s technology could save $3.2 million per turbine per year by avoiding unplanned outages where they are used at power generation facilities, and could extend the life of turbines by 10,000 to 25,000 hours, or 1.5 to three years, which would translate to about $105 million to $210 million in additional revenue per turbine. These estimates, he said, are based on a utility price of 10 cents per kWh for a 100-megawatt turbine that operates at 80 percent availability.

Industries that could benefit from the sensors include not only power generation, but also aerospace, oil and gas, and manufacturing, Soto said.

“I think Sensatek’s product addresses many of the challenges of monitoring temperatures within a gas turbine through the ability to measure wirelessly,” he said. “I think Reamonn and his team have also done an excellent job of identifying customer needs.”

The Sensatek research team is currently demonstrating the performance of the sensors at temperatures above 1,000 degrees Celsius, as well as their durability over 10,000 hours of use. The team has performed testing with Siemens Energy, Soto said, monitoring the response of the sensors when mounted on rotating gas turbine blades.

“The sensor performed better than expected, according to an instrumentation engineer at Siemens,” said Soto, adding that the company has demonstrations lined up with other leading gas turbine manufacturers, such as Solar Turbines.

Since the spring 2018 debut of the MicaPlex, the Research Park’s cornerstone facility, Soto and other entrepreneurs there have secured more than $10 million in seed funding for their ideas, according to Miller. The Research Park has recruited 17 companies such as Sensatek, employing 76 student interns and creating 33 full-time jobs at an average salary of $60,000, she said.

Soto’s most recent award, from the NSF Small Business Innovation Research Phase II program, comes on top of prior investment funding, including early awards from the Embry-Riddle Launch Your Venture competition and the Embry-Riddle Aeronautical University Research Awards. NASA, the U.S. Department of Energy, Starter Studio Seed Fund Accelerator and several other organizations have also recognized the firm.

Soto said that with the most recent funding, the sensors could be on the market as early as October.

“The most recent funding will help us rapidly mature the technology,” he said, “to meet customer requirements.”