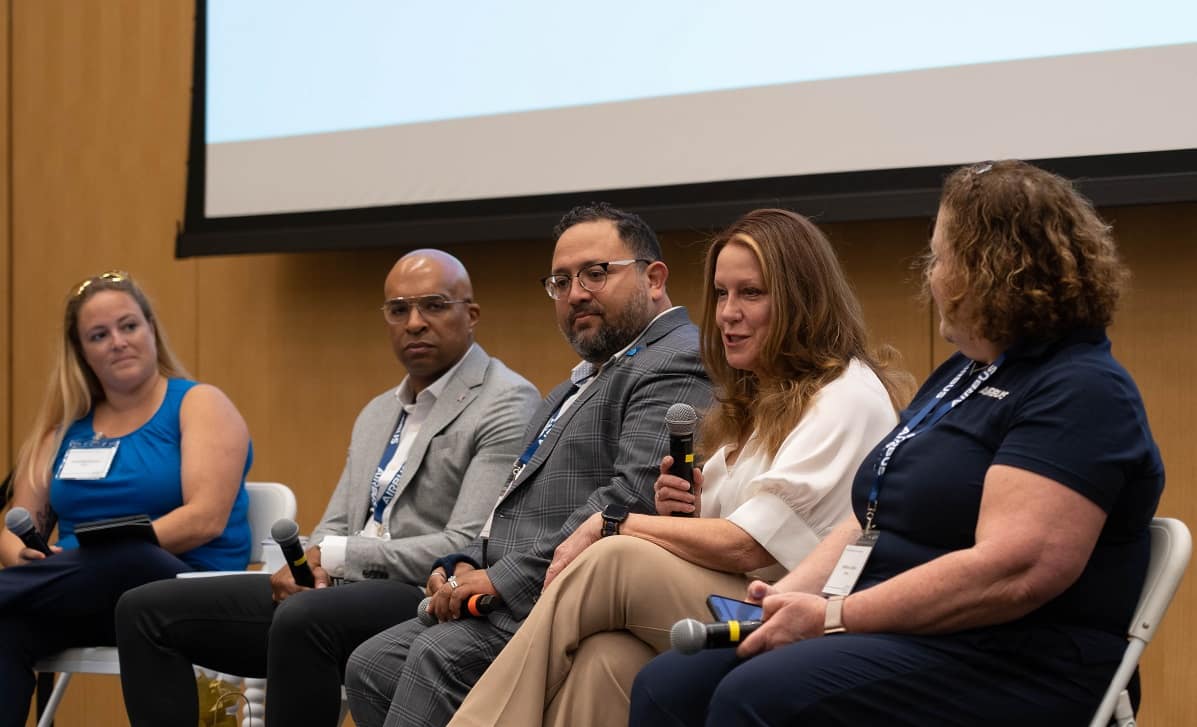 A Workplace Diversity, Equity and Inclusion Revolution panel discussion kicked off the National Training Aircraft Symposium 2022 at Embry-Riddle this week. From left to right, moderator Samantha Bowyer led a the discussion between Kevin Williams, of United Airlines; Efry Ayala-Johnson, of United Airlines, Stephanie Kenyon, of Women in Aviation; and Andrea Leehan, of Airbus. (Photo: Embry-Riddle/Jack Wernet)

Professionals from some of the world’s top aviation firms gathered at Embry-Riddle Aeronautical University this week to discuss the industry’s recent push to expand Diversity, Equity and Inclusion (DEI) efforts throughout the industry.

“We’re more than pilots and flight attendants,” said Efry Ayala-Johnson, director of inclusive talent strategy and programs at United Airlines. “We want people to know that they can come to the airline industry, that they can have a family-sustaining job.”

Ayala-Johnson was one of four featured on the panel, each participant representing a different sector of the aviation industry, from airlines and aircraft manufacturers to nonprofit advocacy groups.

The Workplace Diversity, Equity and Inclusion Revolution panel kicked off the National Training Aircraft Symposium 2022 at Embry-Riddle, a three-day event that featured keynote speakers from The Boeing Company, GE Digital-Aviation and NBAA, as well additional panel discussions on women’s leadership and sustainability.

“Our goal is to encourage more women to get involved in roles in aviation,” she said, citing a wide variety of career paths in the field: aircraft maintenance technicians, for one, business managers, air traffic controllers, even astronauts. “It doesn’t matter what you want to do.”

Andrea Leehan, director of DEI at Airbus, is a prime example. As her company’s first-ever full-time diversity worker, she is filling a role that never existed before in the industry, and she is using the opportunity to pursue lofty company goals — namely, filling 25% of Airbus executive positions with women by 2025.

“We’re not there yet,” she said. “But we’re pushing it forward. We’re relatively early in our DEI journey.”

Many in the industry are similarly early in their journeys — Embry-Riddle, for one, hired its first chief diversity and inclusion officer earlier this year. But as the panel pointed out: This is how progress happens. Awareness is key.

Kevin Williams, head of DEI at American Airlines, added that working with members of underprivileged communities the past few years has highlighted a general lack of knowledge of the breadth of career types available in aviation.

Inclusion isn’t solely a gender- or race-based pursuit, either. United Airlines, for example, is rethinking roles in order to create opportunities for skills-based and “second-chance” hiring — or jobs that don’t require college degrees. They also look for creative ways of partnering with small minority-owned businesses — a LGBTQ+-owned bakery, for example, that may not have the capacity to provide goods for the company’s entire fleet but may be a perfect match for airport lounges.

Airbus is searching for those new ways by looking inward and expanding its focus on employee research.

“We’re looking at retention, employee happiness,” Leehan said, adding that the company has started conducting “stay interviews” in addition to exit interviews. One major lesson learned so far: Employees want growth opportunities. Taking advantage of the ones that come along, however, often requires the help of a mentor. “There’s nothing more important for a diverse group of people than having people there who are willing to support them and drive them through an organization.”

Statistically, the widest gender gap in aviation resides in the C-suite, where one in four executives are currently women but only one in 20 are women of color.

That’s why Women in Aviation is working to expand its Emerging Leaders Program, which focuses on teaching women the finance and leadership skills needed to qualify for executive-level openings.

“We know that mentors can help grow people in their careers,” Kenyon said, adding that her organization offers scholarships and mentorship pairing that help develop female leaders. “The more we can reach women through leadership training — mid-career women — the more likely they are to progress through their careers.”

It’s that sort of action that can make all the difference, according to Williams.

‘Don’t leave it to your best intentions,” he told the crowd. “We all recognize that this is an industry issue. … Be curious. Ask questions.”

And most importantly, as noted by Embry-Riddle’s Chief Diversity and Inclusion Officer Russell Griffin — act.

“DEI is a journey that we ultimately take together,” he said. “Ongoing, frank and open discussion and collaboration is critically important to support and affirm our mutual interests of ensuring that diverse talent is prepared and feels a sense of belonging in the industry.”