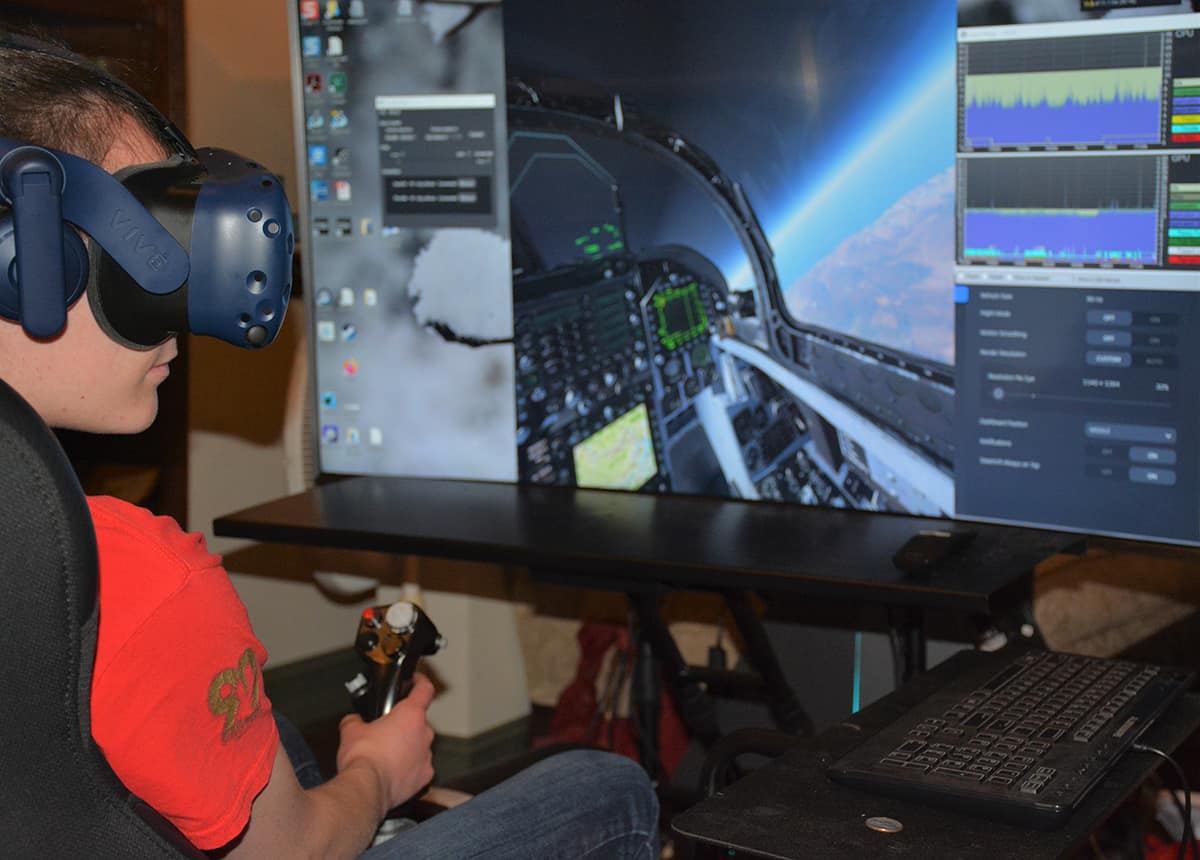 As the developer of a virtual reality (VR) air-to-air combat simulator, College of Aeronautics assistant professor David Thirtyacre has extensive knowledge of the enormous potential, and the limitations, of VR as a teaching tool.

The VR flight simulator he developed for his Ph.D. dissertation on fighter aviation has an extremely high frame rate, or frequency at which images appear on a display, which can simulate reality even in a fast-paced scenario.

“Considering that each aircraft is traveling over a thousand feet per second, the angle rates can be extremely high and the frame rate needs to keep up,” Thirtyacre said in a recent interview.

Most consumer simulators and video games run at a frame rate of 45-60 frames per second (FPS), Thirtyacre said. The simulator he developed, with an internal grant from the College of Aeronautics, runs at about twice that, or 90 FPS.

“It is extremely realistic,” he said. “With each eye receiving high-definition video, it really puts you in the pilot’s seat.”

Thirtyacre’s simulator is not used for flight training, however — it is used for research, partly because “sim-only” training can lead to the forming of bad habits, such as moving a switch using a mouse or controller, rather than an actual switch. Pilots might find themselves reaching for a mouse, for instance, instead of a switch when flying an actual aircraft.

“You need the tactile feel of turning switches,” said Thirtyacre.

His simulator can be used to research such matters as how a pilot responds to audio signals in a stressful situation. Because VR is so lifelike, it can evoke very realistic stress responses, such as sweating hands and shallow breathing. The inability to listen well is another such response, and it, along with many other areas of research involving flight and fligh-training, can be explored with VR simulation. Thirtyacre often uses the simulator to bring data and research material to his Aerospace Simulation class, which he developed for Embry-Riddle’s Worldwide Campus.

Within a few years, Thirtyacre predicts, VR will replace the visual display of many lower-cost flight simulators. While the switches and dials of a cockpit will always be an important part of simulation, he said, the immersive experience of VR, with its 360-degree view of the pilot’s surroundings, will more closely approximate the sensations of actual flight. At the same time, VR will be able to provide excellent experiential learning about such topics as airfield operations, because it can put the student in that environment, in total immersion.

“In the classroom, VR is going to be seamlessly incorporated,” Thirtyacre said. “I can see a VR headset becoming as normal as a textbook — something you need for every class.”

Posted In: Aviation | Computers and Technology