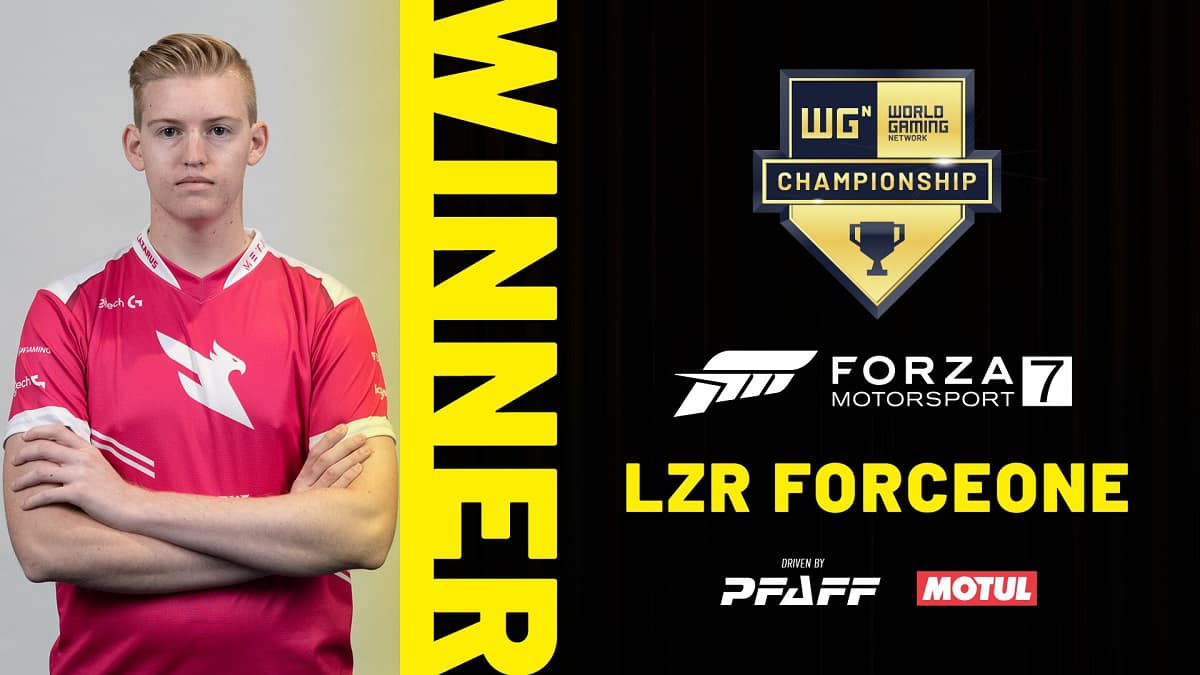 Nyman, however, has learned through the process of participating in competitive video game racing that “a major part of esports is building your own brand, through interviews and social media content, which ultimately allows you to get sponsors and build a following.”

This kind of brand building, Nyman said, “has really piqued my interest in marketing and broadcast” — so much so that he is now considering pursuing a career in broadcast meteorology after he graduates.

The College of Aviation sophomore, who is from Mount Laurel, New Jersey, worked his way through a competitive process that involved 15,000 gamers. Several stages of competition winnowed the top competitors to 16 and then to eight, who were flown to Toronto to compete at live finals hosted at the Canadian International AutoShow Feb. 15-23.

Undefeated in both the qualifying and the final races, Nyman earned the title of “The Fastest Driver in North America,” along with $7,500 in prize money.

“The most nerve-wracking part of competing is living up to my own expectations,” Nyman said. “Since a young age, I’ve been an incredibly competitive person. I can be pretty hard on myself when I make mistakes or underperform based on what I believe I can do.”

His preparation for competition taught him a lot about how he learns and how to succeed — not only in esports, but also academically, as a student in Embry-Riddle’s Applied Aviation Sciences Department.

“It takes a really strong work ethic and lots of dedication to be the best in any sort of sport or activity, and video games are no different,” Nyman said. “I often apply the same strategies to practice as I do to studying, which allows me to do both as efficiently and effectively as possible.”

In the same way that Nyman’s individual competition has taught him both tactical and soft skills, such as communication and marketing, the video game competition that members of Embry-Riddle’s eSports club participate in is providing them with a wide range of proficiencies.

Club members, who numbered a handful five years ago and are now up to 138, participate in tournaments involving games such as “League of Legends,” “Overwatch,” “Counter Strike: Global Offensive” and “Tom Clancy’s Rainbow Six Siege.”

“The club’s meetings and events create an environment where people passionate about being great, or even the best, at the games they play can meet up, make friends and improve each other’s skills through teamwork and practice,” said Jack Goldberg, president of the club.

Goldberg points to research out of the University of Toronto that suggests that gaming can improve hands-on coordination and motor skills.

The immersive experience of playing video games competitively can provide high-stakes training and can help eSports athletes to enter a cloud or work-at-home environment seamlessly, said Dr. Wendi M. Kappers, David B. O’Maley College of Business assistant professor and club adviser. “They can often turn their experience into employment,” she said.

Meanwhile, club members compete as teams, which helps to sharpen their communication and interpersonal skills.

“The socialization aspect is just beautiful,” said Kappers. “They're learning how to be part of a team, and teamwork is needed in all fields, especially within engineering and business.”