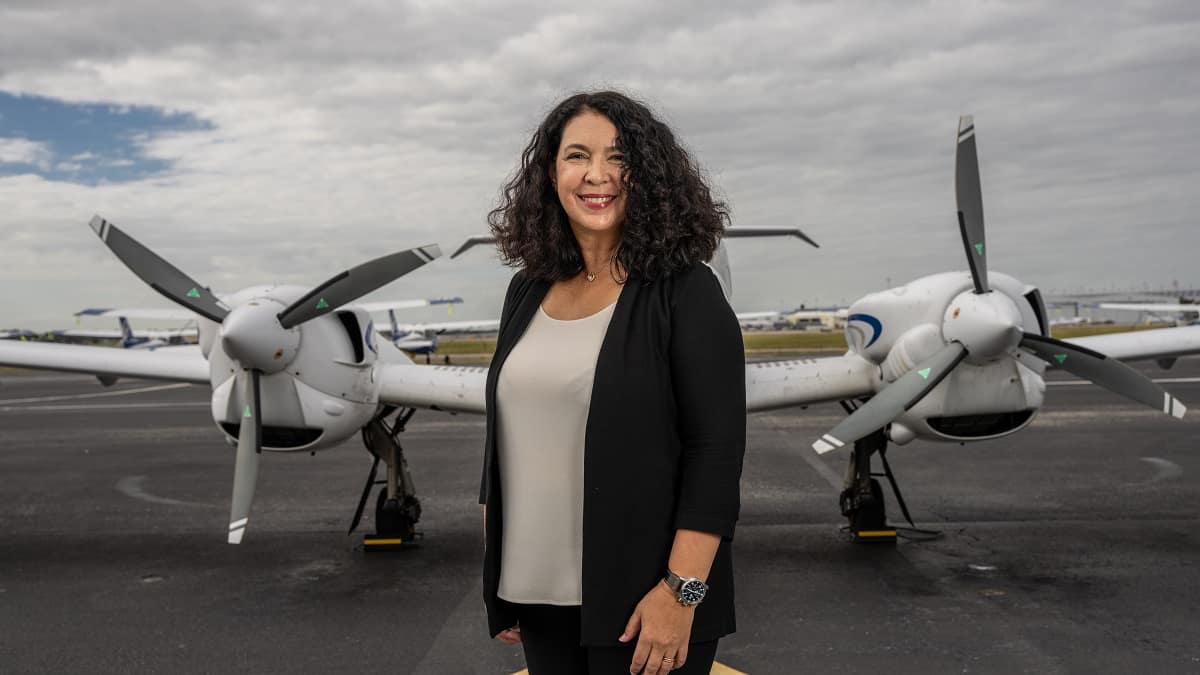 Dr. Barbara Holder, Embry-Riddle Aeronautical University’s most recent Presidential Fellow, studies how pilots think in order to develop aviation systems and procedures that are as safe, efficient and easy-to-understand as possible.

Holder’s mission at Embry-Riddle is to create a university-wide research center focused on flight operations informed by real-world cognition and human factors.

To further elevate Embry-Riddle research initiatives – a plan set forth by Embry-Riddle President P. Barry Butler, Ph.D. – the university has so far hired two Presidential Research Fellows – Holder, an associate professor in Embry-Riddle’s College of Aviation, School of Graduate Studies, and Dr. Kenji Yoshigoe, a professor in the Department of Electrical Engineering and Computer Science.

Holder has devoted her career to understanding the complex relationships between people and technology.

In particular, she has studied how commercial airline pilots worldwide make sense of the technologies they use to operate modern jets. Her research leverages a technique called cognitive ethnography to capture the thought processes behind flying. Such insights are critically important for designing next-generation training programs and flight decks as well as the various roles of people within the aviation system.

Holder systematically observes pilots in their natural habitat. Over the years, she has joined U.S. Navy officers as they trained to fly sub-hunter helicopters. She has completed extensive field studies of global air transport flight operations, observing commercial airline pilots from the jump-seat to identify how they use, understand and interact with the technologies on the flight deck.

That information helped Holder guide the design of several 787 flight deck systems. It also helped her redesign the Boeing Quick Reference Handbook – the manual pilots use to respond to emergency and non-normal events – for all then-in-production Boeing airplanes. “My work focuses less on the technology and more on how people think when they interact with it,” Holder noted.

Embry-Riddle’s Senior Vice President for Academic Affairs and Provost Lon Moeller commended Holder’s highly collaborative, multidisciplinary approach to her work. “Dr. Holder is an internationally recognized expert in aviation safety and applied human factors with an emphasis on enhancing cognitive work,” he said. “I look forward to watching her progress as she works to advance Embry-Riddle research in aviation human factors for flight.”

Holder’s college dean, Dr. Alan Stolzer, said: “I’m delighted to welcome Dr. Holder to the College of Aviation. Her expertise in real-world cognition to improve safety and system performance is a perfect fit for us as we continue to develop a top-tier research program in that area.”

A Pilot and a Scholar

Holder has served as the principal investigator on multiple projects looking at issues such as cognitive skills degradation, smart human-machine collaboration and much more. While pursuing her Ph.D. in Cognitive Science from the University of California, San Diego (UCSD), Holder worked with the famous anthropologist and navigator Dr. Ed Hutchins, author of Cognition in the Wild.

A pilot herself, Holder and her husband own an aerobatic airplane and live in the Spruce Creek fly-in neighborhood near Embry-Riddle’s Daytona Beach, Florida, campus. Holder developed a love of aviation because of her grandfather, who was a World War II aircraft mechanic. Listening to his stories may have been Holder’s first brush with ethnography – a way to study cultures by collecting individual stories.

Later, after her first flight-training session, Holder became hooked on aviation. “Flying was so much fun, but I noticed that the displays were terrible from a human factors perspective,” she recalled, laughing. “I realized that was what I should study in graduate school.”

Holder put herself through school with jobs and scholarships. She earned her bachelor’s degree in Social Ecology at the University of California - Irvine, after which she spent five years at NASA’s Jet Propulsion Lab before completing graduate school at the University of California San Diego. “Money was tight for me growing up,” she said. “I’ve always known that education can provide a path to financial security.”

Before joining Embry-Riddle in November 2021, Holder had worked since 2015 as a fellow in Advanced Technology at Honeywell Aerospace, where she studied human-machine issues across a wide range of aircraft. Earlier, she spent 15 years with The Boeing Company. There, she was an associate technical fellow and lead scientist of the Flight Deck Concept Center.

Holder was a post-doctoral research fellow at NASA Ames Research Center where she investigated how pilots come to understand the auto-flight system of the Airbus A320 while flying the line.

Holder is chair of the Human Factors Subcommittee to the U.S. Federal Aviation Administration’s (FAA) Research, Engineering and Development Advisory Committee.  She is also a member of the FAA’s Air Carrier Training Aviation Rulemaking Committee’s Flight Path Management Working Group. She is a fellow of the Royal Aeronautical Society. She has nine patents and multiple scholarly publications.