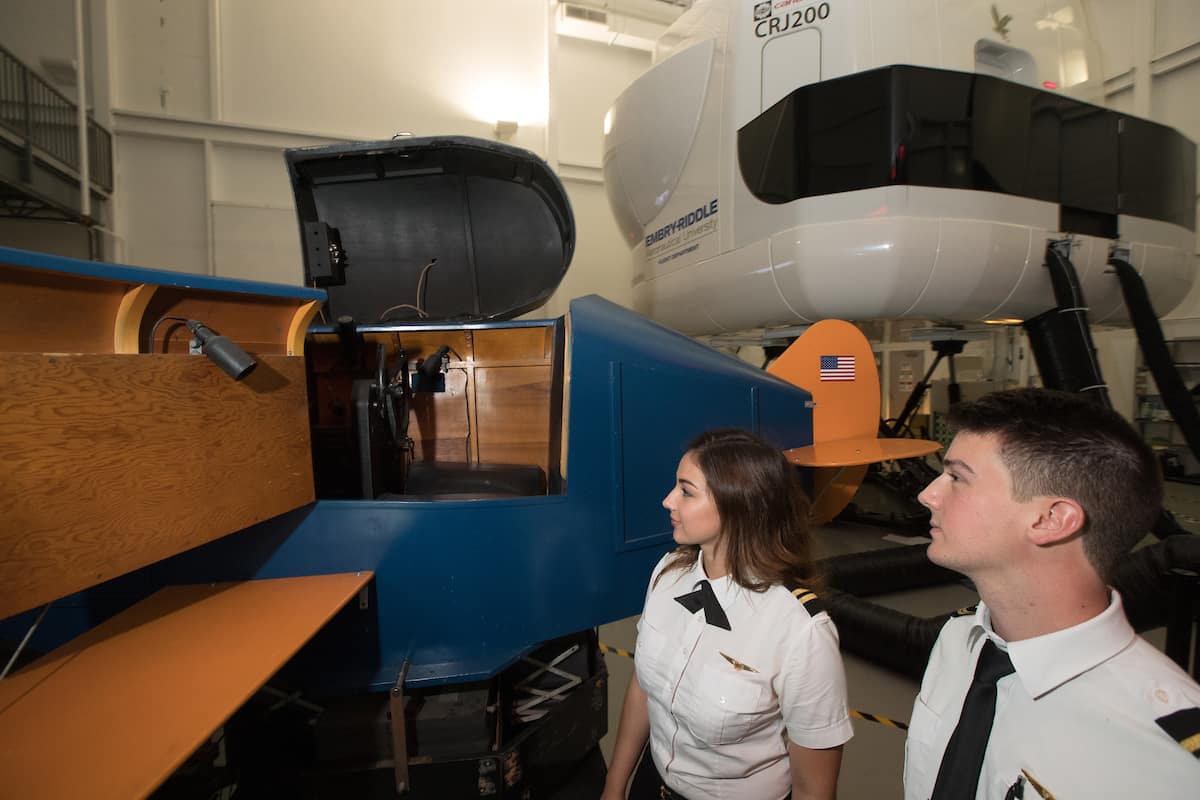 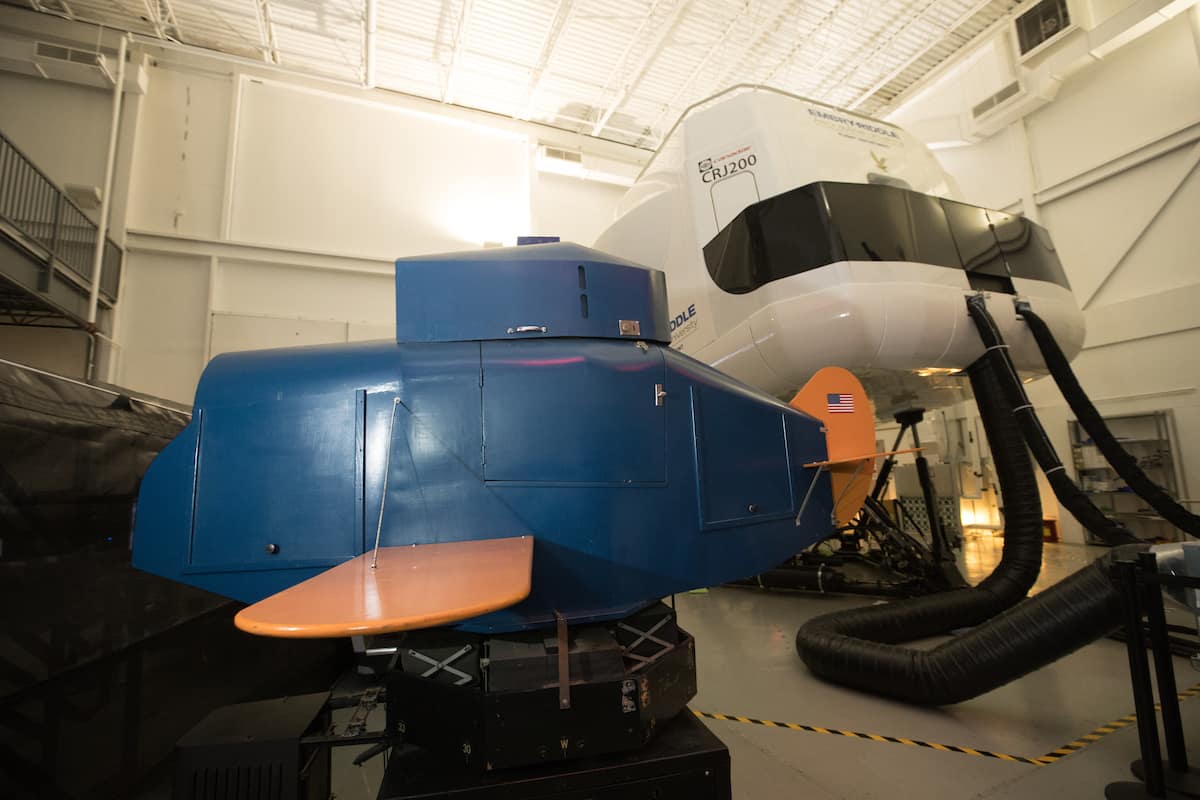 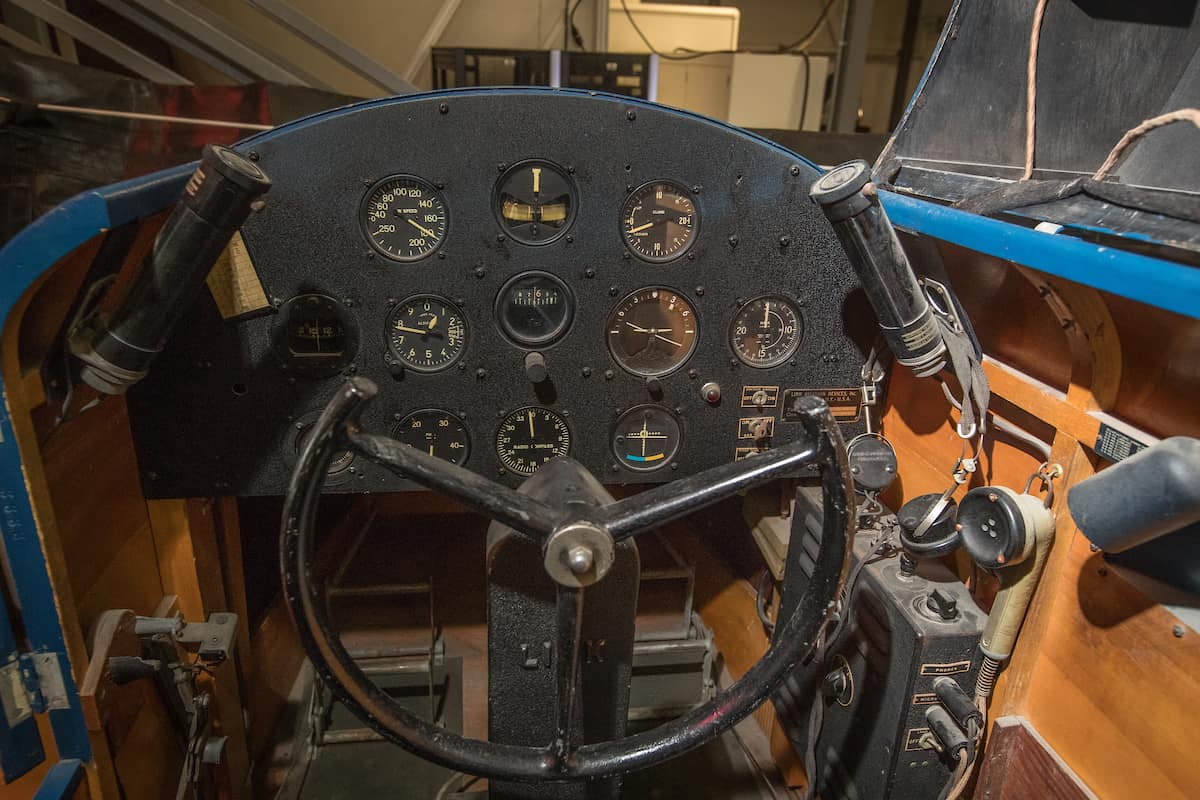 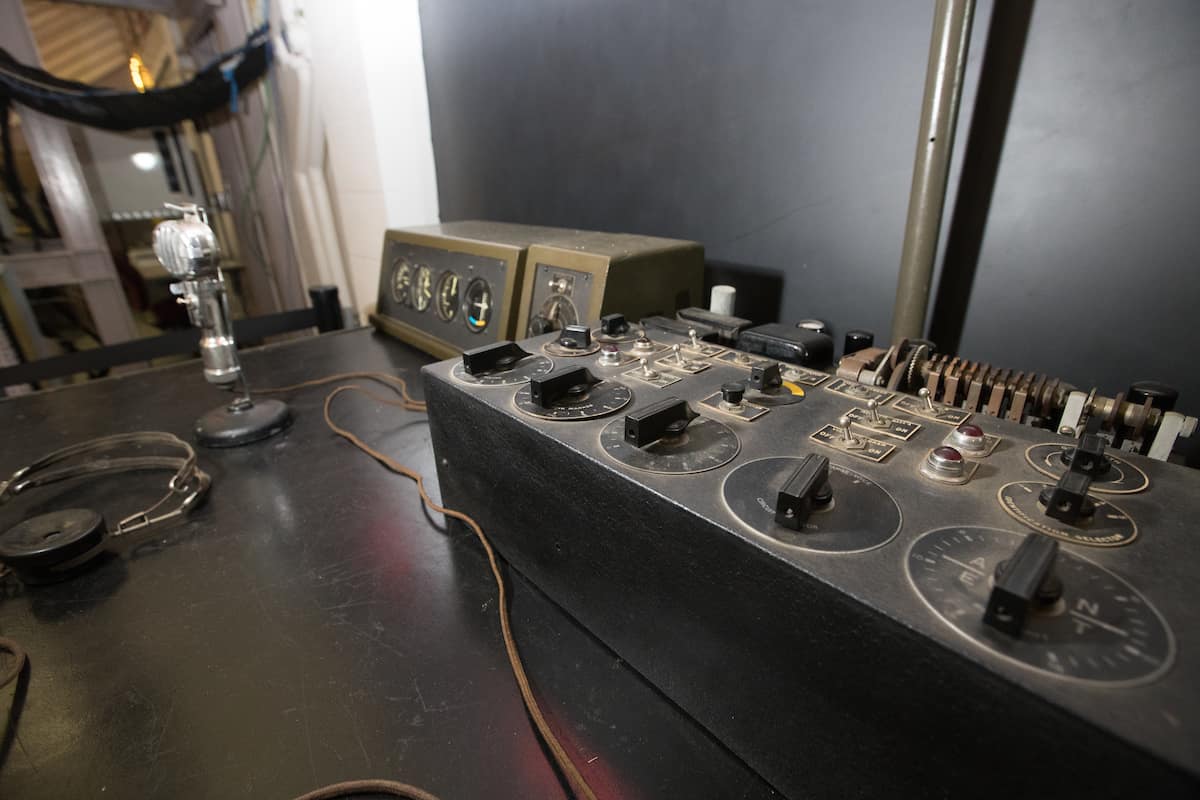 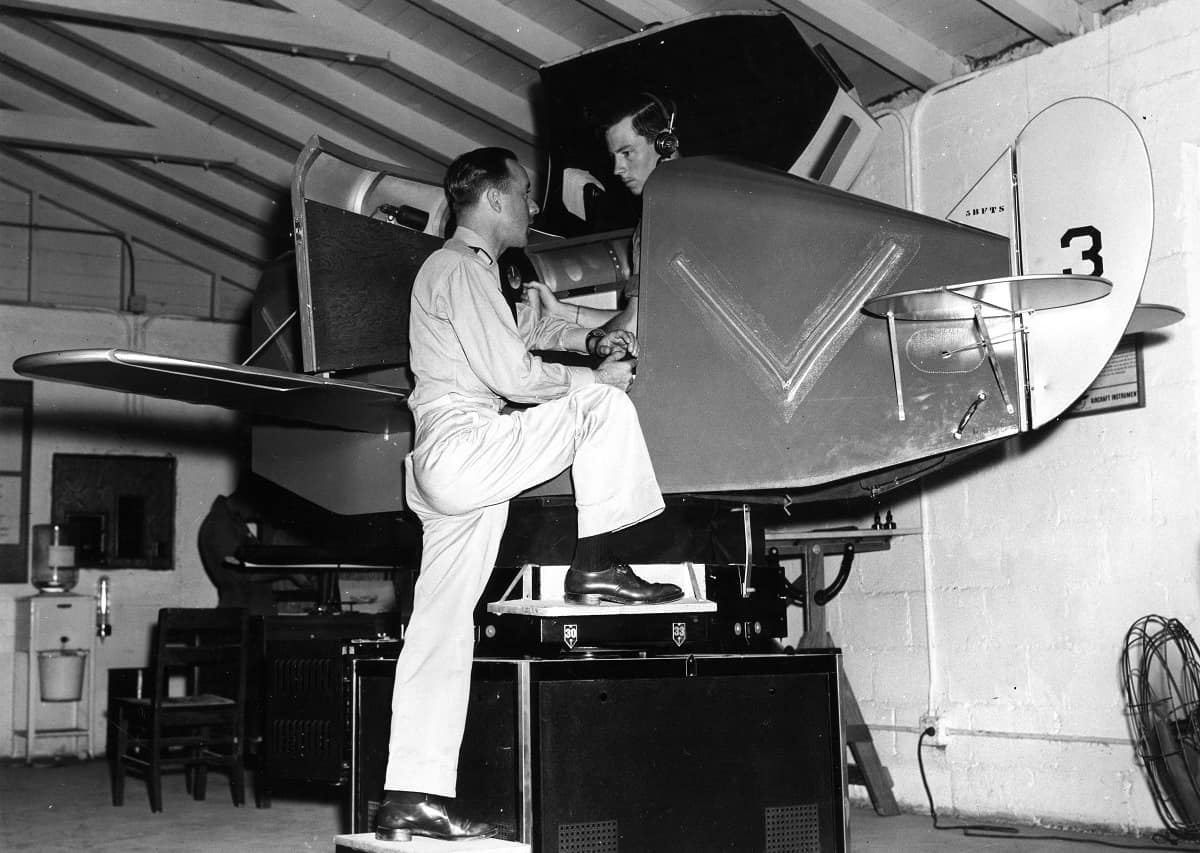 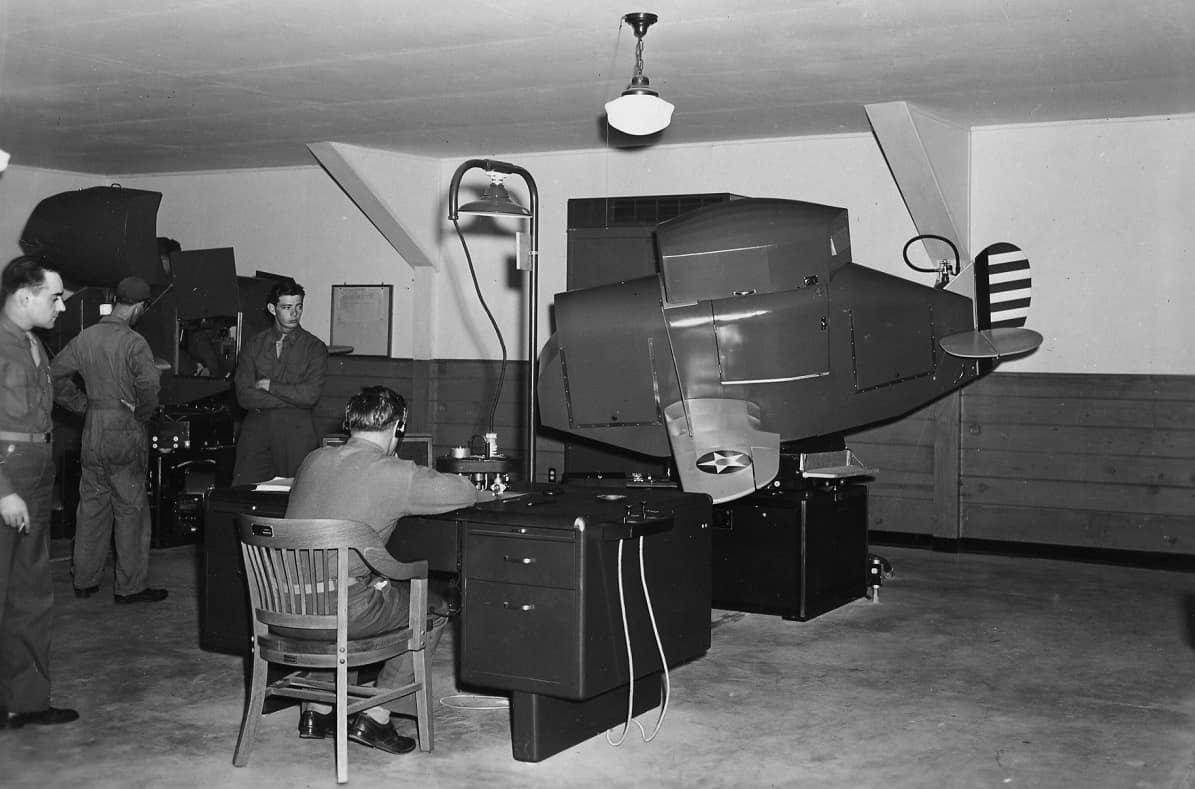 The Link Trainer used to train military pilots in the 1940's is on display in the university's Advanced Flight Simulation Center. (Embry-Riddle/David Massey)

Looking inside the small, historic 1943 flight simulator that was used by American and British aviators to prepare for air support and combat in WWII, students at Embry-Riddle Aeronautical University’s Daytona Beach Campus can almost picture what it was like for pilots learning to fly.

The wooden, single pilot seat blue Link Trainer, shaped like a small submarine, with wings and an opaque retractable top, is on display in the university’s Advanced Flight Simulation Center. Next to it sits a multi-million dollar, full-motion Flight Safety International CRJ-200 Regional Jet Full Flight Simulator, that is so realistic in its operation, that the FAA considers it the equivalent of flying a regional commercial aircraft full of passengers. The two simulators show students the sharp contrast between the very beginnings of simulation training to the technological sophisticated flight trainers of today.

Daniela Kaselow, an Embry-Riddle flight instructor who graduated in December with a bachelor’s degree in Aeronautical Science, enjoys seeing the historic trainer knowing its rich history.

“With anything you do, it’s important to have the knowledge of how everything started,” she said.

Link Trainers, originally built in 1929 and patented in 1931 by Link Aviation Devices, Inc., are named after the inventor Edwin Link, known as the father of flight simulation. The first major interest in the trainers, also called “blue boxes,” based on the color of the aircraft at the time, was in 1934 after the U.S. Army Air Corps took over the country’s airmail service because of allegations of mail fraud by private contractors, explains Raul Rumbaut, manager of Embry-Riddle’s Advanced Flight Simulation Center. Training was needed after accidents occurred because of lack of experience flying with instruments in bad weather and night flying.

Widespread use followed during World War II with more than 10,000 trainers used to improve safety and shorten training time for more than 500,000 pilots, according to the American Society of Mechanical Engineers, which declared it a Historic Mechanical Engineering Landmark. Link Trainers were also used in other historic applications such as training of Apollo astronauts for moon landing and other space shuttle pilots.

Using the then state-of-the-art Link Trainers, Embry-Riddle taught thousands of Army Air Corp pilots, Naval aviators and Royal Air Force and French pilots before, during and after World War II at airfields around South Florida.

The Link ANT-18 “Blue Box” was very sophisticated for its time, as Mr. Link was a former organ and nickelodeon builder. He used his knowledge of pumps, valves and bellows to create a flight simulator that responded to the pilot's controls and featured the ability to rotate through all three dimensions—  pitch, yaw and roll.  The trainer effectively simulated all flight instruments, and modeled conditions such as pre-stall turbulence, forgetting to retract the landing gear, and spinning. It was fitted with a removable canopy, which could be used to simulate flying blind, which was especially useful for navigation and instrument training.

Watch a historic film of a link trainer in action 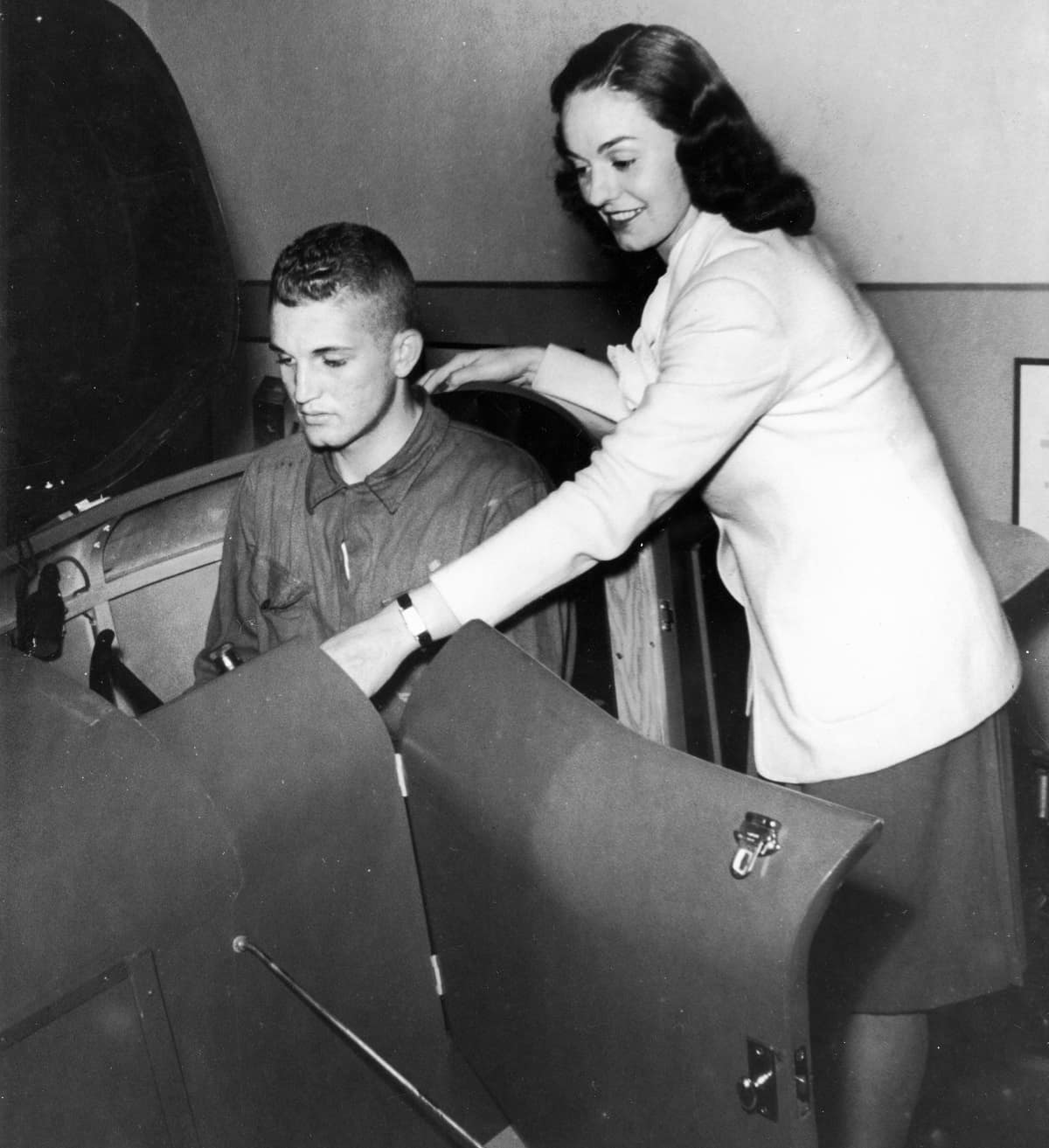 U.S. Army Air Corps pilots were trained alongside those from the British Army Air Force at locations in Florida, including Carlstrom Field in Arcadia, Fla. and the Riddle Field in Clewiston, Fla. The Link Trainers were also used in the early 1940s to the 1950s at the Embry-Riddle School of Aviation in Miami.

“There are few names in aviation that go to the very core of who we are. Cessna is one; Link is another,” said Dr. Tim Brady, an aviation historian and former Dean of the College of Aviation, who went to see the trainer soon after it arrived. “The Link trainers helped make pilot trainees into skilled professionals capable of safely flying the airplane when all outside visual references were lost.  Innumerable aviators owe their very lives to the little blue box.”

The trainer on display on the Daytona Beach campus was purchased from a private owner in Chicago and is one of many evolutions of the Link Trainer, which was designed to provide primarily instrument training, Rumbaut said. The trainer, which started being displayed on campus last year, is complete with the original yoke (control wheel) and other components and the original Army Corp maintenance log that arrived inside.

The historic device, 9 feet long by 9 feet wide (including the wings) and most resembling a toy aircraft for children, was purchased as part of the university’s Heritage Initiative to collect, restore and display historic artifacts throughout campus that speak to Embry-Riddle’s history. The display also includes the instructor’s station with original controls and equipment.

While the Link is a motion trainer, most simulators, excluding full motion simulators like Embry-Riddle’s Level D CRJ-200, are static devices today as the industry realized it could offer just as effective training without motion, Rumbaut said.

Through seeing the trainer, Rumbaut hopes students are inspired by Link and his accomplishments. “Though he may have received honorary degrees during his lifetime, Edwin Link never completed high school. His success was based on talent, attitude, and vision,” said Rumbaut, who received a Link fellowship for research pertaining to training devices. “I would want our students to appreciate his contributions to aviation and understanding that regardless of what you’re good at, use it to drive success into everything you do.”

Dr. Leo F. Murphy, Embry-Riddle professor of aeronautical science, also has a unique interest in Link Trainers. With the assistance of several special volunteers, he directed the restoration of two Link Trainers in 2006 that were used by the students at Choctawhatchee High School in Fort Walton Beach where he helped establish the university’s first aerospace dual enrollment program in 2004 with Dr. Rob Owen professor of Aeronautical Science. Murphy is thrilled Embry-Riddle students can now see Link’s contribution to aviation history.

“As our World War II veterans in particular will testify, we have come a long way from sitting in a non-air conditioned ‘blue box’ powered by a series of air-driven bellows to the advanced computer-driven flight simulator technologies of today,” Murphy said.