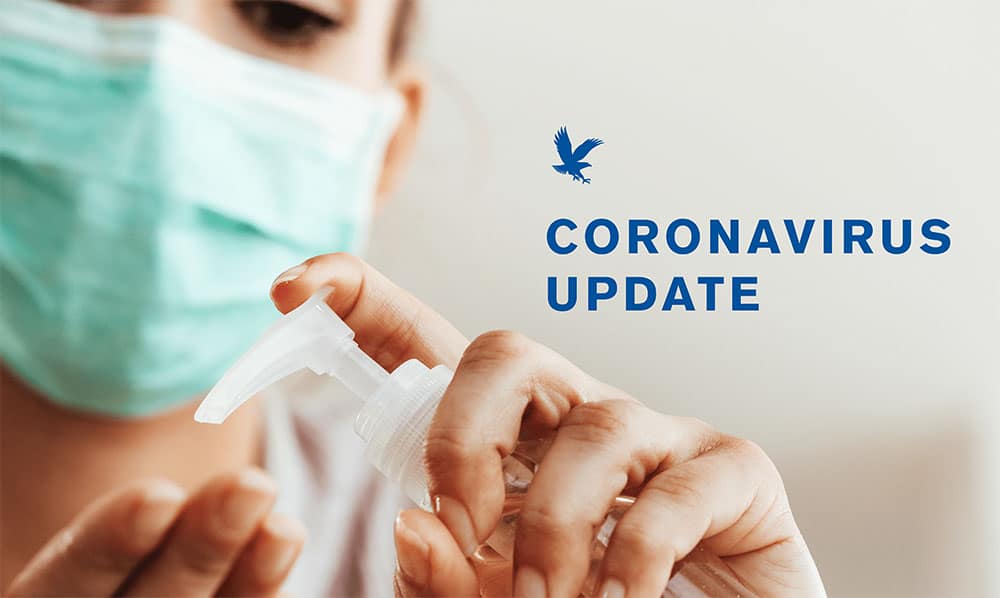 As Embry-Riddle Aeronautical University prepares to resume low-density, face-to-face instruction on June 30, University President P. Barry Butler called on everyone to uphold rigorous new health precautions at all times, whether they are on or off campus.

Face coverings, daily wellness checks and physical distancing are now mandatory at Embry-Riddle, Dr. Butler noted during a virtual town hall meeting that drew 800 participants this week. He emphasized that “this should not just be focused on students, but on all of us – including administrators, faculty and staff. Everybody’s in on this together.”

If anyone fails to follow the rules, he said, those who observe the problem should first offer a friendly reminder, then tell the person that they are in violation of employee policy and student conduct rules and subject to disciplinary action. Dr. Butler noted that he hopes others will remind him of the rules if he ever forgets them.

Embry-Riddle’s intense core safety culture has allowed the Daytona Beach Campus, for example, to complete more than 10,000 flight or simulator hours and 17,000 contact hours since May 2 without a single known case of Covid-19 transmission between individuals in that program, Dr. Butler noted. “That is not by accident,” he said, referencing the Flight Department’s rigorous new health protocols. “People have worked hard.”

Embry-Riddle’s good fortune in avoiding widespread infections so far – despite 9 confirmed cases across all campuses since the crisis began – reflects the institution’s safety culture, he noted. That foundation of safety serves as the basis for the university’s Path Forward strategy and related Best Practices Guide, which spell out Embry-Riddle’s plan for rebounding from the global pandemic. Repeated, transparent communication, such as a June 12 memo outlining the school’s Covid-19 surveillance testing protocol and a June 18 message to faculty regarding classroom procedures, enhance compliance with safety rules, Dr. Butler said.

During the virtual town hall meeting, Embry-Riddle leaders summarized operations and facilities, academic preparations, the financial outlook, enrollment issues, and the status of the Worldwide and Prescott, Ariz., campuses.

All of the university’s safety systems and protocols – from personal protective equipment to no-contact technology and academic scheduling to reduce hallway congestion – have all been harmonized for effectiveness, Embry-Riddle officials said. The university’s planning team has also implemented tabletop rehearsals as well as a “secret shopper” program to assess solutions.

Covid-19 diagnostic testing is the next safety layer being implemented. Selecting key segments of the student population for testing throughout the fall semester. As of June 22, some 89 percent of all employees initially selected for testing on the Daytona Beach Campus and 97 percent selected on the Prescott Campus have already been scheduled for testing, said Chief Operating Officer and Senior Vice President Rodney Cruise. The Covid-19 testing is mandatory for those selected.

The university has purchased high-volume thermal scanners, and it is continuously evaluating other advanced technologies such as wearable devices and radio-frequency tools for crowd monitoring.

Embry-Riddle’s experience in resuming face-to-face instruction for the Summer B academic session on June 30 will further inform its operations for the fall 2020 semester, said Provost Lon Moeller, senior vice president for academic affairs. Two academic committees, with representation from Embry-Riddle’s Prescott, Ariz., and Daytona Beach, Fla., campuses, have been working to prepare for the fall semester, he noted. The academic calendar was revised to help minimize health risks, Moeller noted, and faculty members have been working with the Centers for Teaching & Learning Excellence (CTLE) to remain nimble in case circumstances change.

The Provost said that fall class schedules will be finalized within the next two weeks, to limit class sizes and allow for appropriate physical distancing, and to optimize class schedules to minimize hallway congestion. The university has assessed classrooms and labs to determine the capacities needed to meet physical distancing guidelines, Moeller said. These lower capacities require changes to the fall class schedule, and the Registrar is currently reassigning classes within these new limits, he noted.

The university’s plan to resume face-to-face instruction has both revenue and expense implications, but that decision was based first and foremost on what’s best for students, with safety being the most important element, said Chief Financial Officer and Senior Vice President Dr. Randy Howard.

The financial planning team has been implementing financial discipline to protect the university’s resources while the economy recovers. With that said, Dr. Howard emphasized that “we need to spend whatever we reasonably need to spend to keep everyone safe.”

Embry-Riddle’s Board of Trustees had approved a Fiscal Year 2021 budget that included a pool for salary increases. However, a revised FY21 budget has been developed due to significant enrollment and financial uncertainty associated with the pandemic and ultimate recovery period. The university will review its overall financial status once enrollment and financial trends become clearer this fall, and adjust the budget as needed. The issue of raises will be addressed again at that point, based on the university’s financial position.

Dr. Jason Ruckert, vice president for enrollment management, said that his team has been working nonstop to personalize outreach to prospective students and to encourage tuition deposits. Embry-Riddle’s Worldwide Campus met its registration goal by 100 percent for this academic year, he reported. The Prescott Campus has seen a 1.5 percent increase in undergraduate deposits for the fall semester. While the Daytona Beach Campus saw a 6 percent decline in undergraduate deposits for the fall term, some of that decline had been built into projections prior to the health crisis, he said.

Currently, Dr. Ruckert said, “We are trending well in comparison to many higher education institutions and we are cautiously optimistic with regard to enrollment, though we face great uncertainty as we head into the summer months. Even though our trends are good at each campus, there are several national surveys showing that significant percentages (e.g., 15 percent to 30 percent) of incoming freshmen are rethinking their decision to attend due to health or financial concerns.”

Dr. Ruckert added, “We have a lot of work to do, but the team has responded creatively.” He noted that Embry-Riddle’s status as the leading aviation and aerospace institution has been a major recruitment advantage. He commended Embry-Riddle’s three College of Aviation deans for emphasizing that the aviation industry will rebound along with the rest of the economy once the health crisis passes.

At Embry-Riddle’s Worldwide Campus, an award-winning online education provider, operations have been largely unaffected by the health crisis, although headquarters staff began working from home in mid-March, said Chancellor Dr. John R. Watret. With employees planning their return to the headquarters location in Daytona Beach, Embry-Riddle is working to reconfigure workspaces, to ensure physical distancing.

Worldwide campuses on military bases, which shut down amid the pandemic, are beginning to resume operations, he said. Staff at the Embry-Riddle Asia Campus in Singapore and the Central & South America location in Brazil are all healthy at this time, Dr. Watret reported.

In response to the pandemic, the Worldwide team stepped up to help in many ways. As the residential campuses needed to quickly reschedule all summer course offerings, for example, Worldwide staff rapidly scheduled 9,300 students in a short time, Dr. Watret noted. In addition, Worldwide educators have been working side-by-side with their residential campus peers to help all instructors fine-tune online content delivery.

“When this crisis happened and we started pivoting to remote delivery, it was great to see the work between the CTLE teams across all three campuses – all the work they did to help us respond to this, and to see the camaraderie that has come out of the groups working together and using best practices,” Dr. Watret said.

Prescott Campus Chancellor Dr. Anette Karlsson commended her team’s hard work in preparing for Summer B and the fall semester. She also echoed Dr. Watret’s commendation of employees who have worked across campuses to leverage the best available online tools to serve students.

In Arizona, as in Florida, businesses have been allowed to reopen, but with physical distancing and other health guidelines in place. Noting that face coverings are now mandatory on all of Embry-Riddle’s campuses, Dr. Karlsson shared that it took her a couple of days for her to feel comfortable with her face covering. Now, however, “It’s pretty nice, especially in the windy season here in Prescott!” she said.

Prescott classrooms and labs have been set up to accommodate physical distancing. Some classes have been moved to new locations. “The goal is to have as much face-to-face interaction with students as possible, while keeping everyone safe,” she noted. Additional wellness check stations will be set up across campus soon, to ensure that everyone can easily have their required daily temperature check.