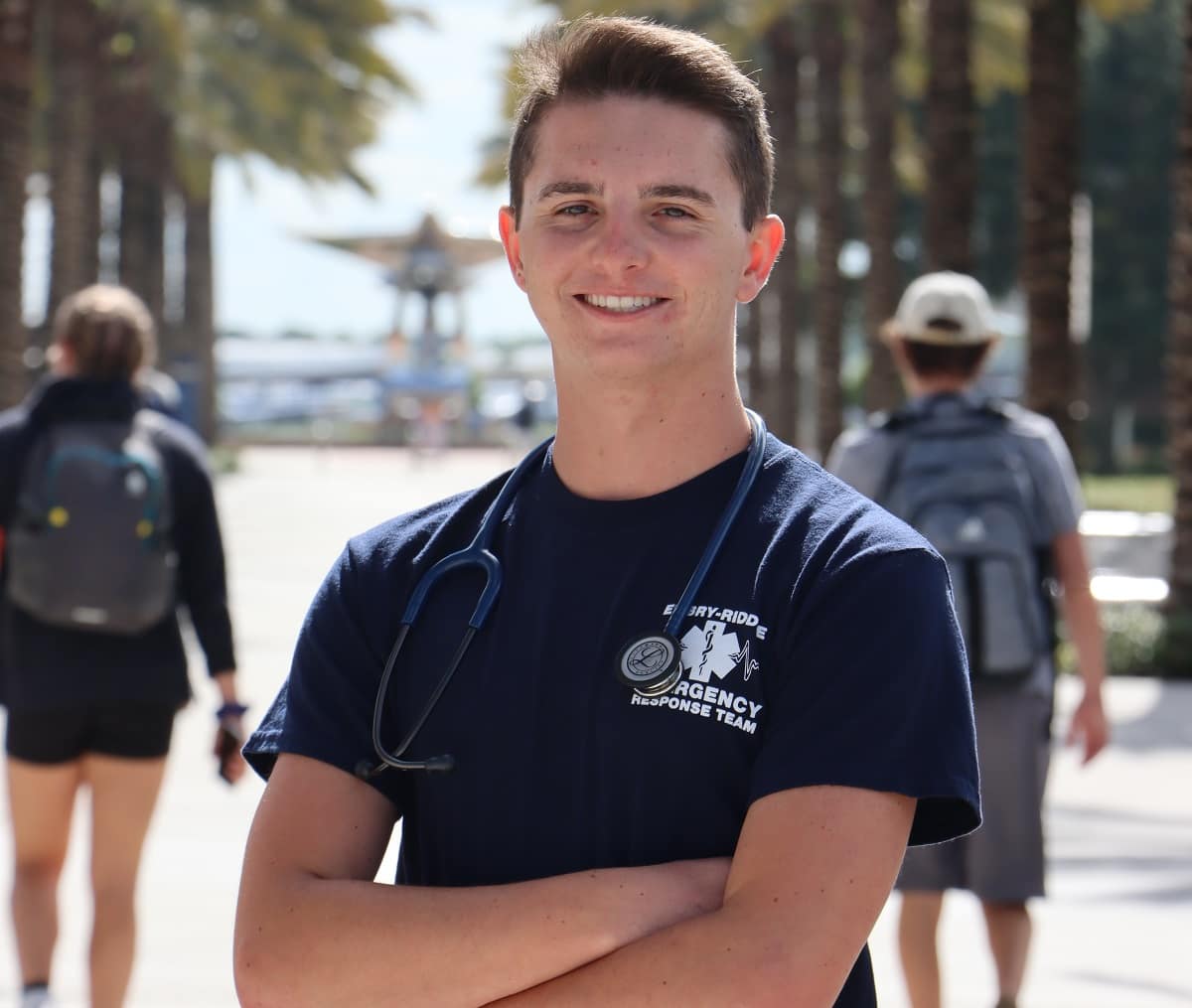 Ryan Groel was on a flight from Orlando to Las Vegas this fall when he saw a flight attendant rushing down the aisle with a medical bag in one hand and an automated external defibrillator — used to revive a person who has gone into cardiac arrest — in the other.

The Embry-Riddle student from Port Orange, Florida, who had just gotten his Emergency Medical Technician (EMT) license the previous summer, jumped into action.

“I was confident in my ability to see what was going on and to help if needed,” the 21-year-old junior in Aeronautics said.

Approaching a small crowd that had formed around one row of seats, Groel saw a man, who seemed to be about 60 years old, lying in the aisle unconscious. A nurse was giving the man mouth-to-mouth resuscitation. Explaining that he was an EMT, Groel moved closer and got to work. Finding no pulse, Groel started chest compressions.

Groel performed one round of compressions and applied the defibrillator electrode pads to the man’s chest. Then he and the nurse administered another round of CPR. Suddenly, the man started to respond.

“His eyes started to open up, so I immediately stopped the chest compressions,” said Groel.

Because the plane was nearing Las Vegas and the man had regained consciousness, a doctor whom the flight attendant had reached via a MedLink connection recommended that the flight continue as planned. Groel and the nurse helped the man to sit up and gave him oxygen until the plane landed.

Southwest Airlines rewarded Groel with a travel voucher and sent him a thank-you note.

“Occasionally, one of our customers is called upon to provide medical assistance that is coordinated with the skilled efforts of our flight crew in the event of an inflight medical situation,” the note said. “It seems that you did just that, and we are grateful for the medical assistance you rendered.”

Groel, who is a Volusia County lifeguard and a member of the Embry-Riddle Emergency Response Team (ERT), did his EMT training on a scholarship through the university. ERT Chief Sam Unsworth said Groel's assistance exemplified the team's degree of preparation and commitment.

"Our members have been trained to stay calm under pressure and work as a team to ensure our patients receive the highest quality, most expeditious emergency medical care possible," Unsworth said. "Ryan exemplified these qualities that day. I have full faith in all of my members that, no matter where they are, they would step up and act the same way. Helping people in need is what our organization was founded on, and it is a promise that we work hard to fulfill every day."

Each year, ERT members, like Groel, earn scholarships to help raise their skill and certification levels.

“Having just graduated from the training two months prior to this incident, I felt comfortable doing anything that needed to be done,” Groel said. “I was excited to be able to help someone who, without assistance, wouldn’t be here.”