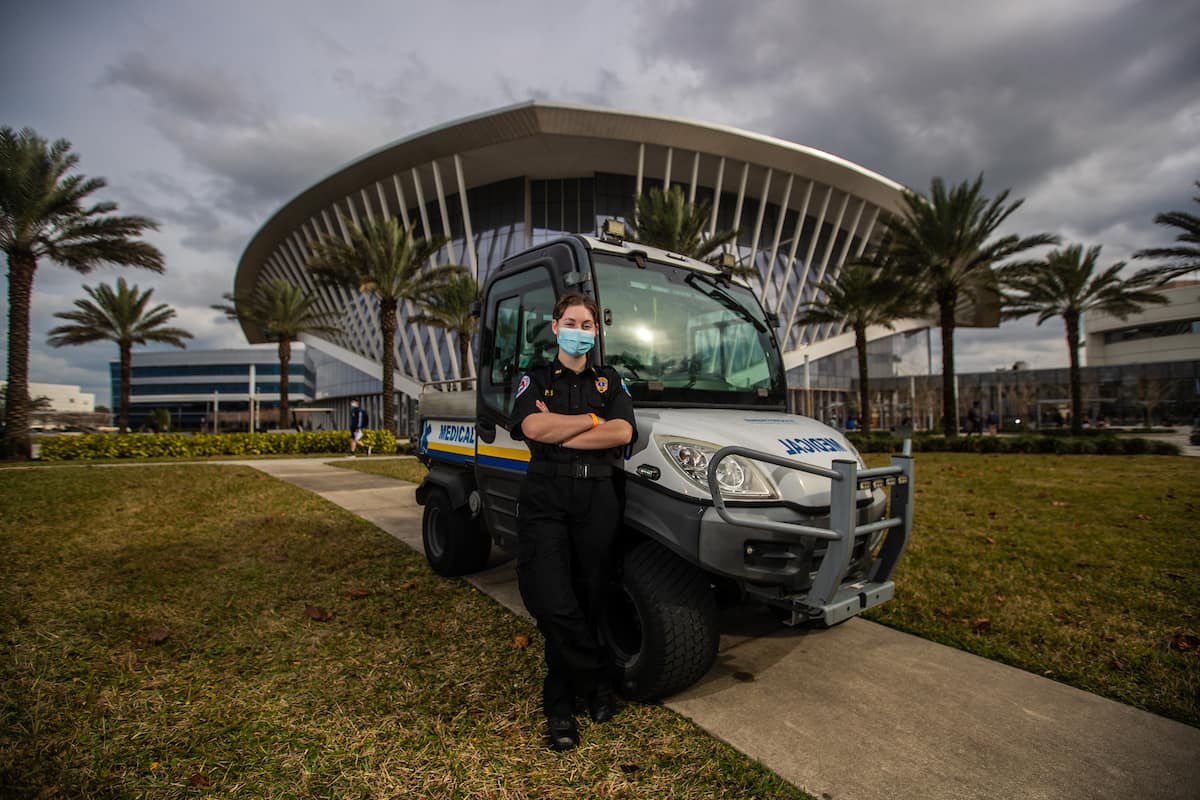 Mary Ellis, chief of Embry-Riddle’s student-directed Emergency Response Team, says the group has handled 1,700 calls for medical assistance since 2010. An Air Traffic Management major, Ellis has already scored a slot at the FAA Academy so that she can become a certified Air Traffic Controller after graduating from Embry-Riddle. (Photo: Embry-Riddle/David Massey)

Ellis should know. Now a senior Air Traffic Management student at Embry-Riddle, Ellis broke her leg during her second semester while learning to skateboard. She received help from highly trained student volunteers with the Med Club, now known as the Emergency Response Team (ERT).

In addition to skateboarding accidents, ERT members render aid to students who, among other things, fall off bunk beds, crash their bicycles or cars, get sick on alcohol, or – only at Embry-Riddle – injure their finger in a lightsaber duel.

Here’s how it works: If a call for help comes into Campus Safety & Security, Ellis and her team rush to the scene in one of their two specially equipped vehicles. A typical ERT crew includes at least one state and nationally licensed emergency medical technician (EMT) and a certified first responder (CFR), in addition to others in training, Ellis said. The team provides medical assistance, as needed, and determines whether an ambulance should be called.

For her fellow students, Ellis wants to make one thing clear: “We’re not cops,” said Ellis, who has already scored a slot in the FAA Academy so that she can become certified as an air traffic controller. “Students are often scared to call us for fear of getting into trouble, but we can’t get you into trouble. Our job as medical providers is to show up and help you, and if you need more help, to send you to the hospital. We don’t judge.”

Embry-Riddle students are famously busy with academic work, yet ERT members assist students, faculty and staff at all hours – for no pay or school credit. They also provide training courses in life-saving techniques such as CPR and how to stop a major bleed, and they serve on standby during large events on campus. “If you want to help people and the community, you’re going to find a way,” Ellis said when asked why – and how – she does it. “We fit the ERT duties around our school work.”

Justin de Perio, a junior Aerospace Engineering student, cited multiple motivations for serving on the ERT. First, he said, it allows him to make a positive difference in people’s lives. In addition, since the ERT is a division of the Student Government Association, de Perio knows he’s playing an important role in university life. What’s his No. 1 motivation? “By far, the biggest reason I do ERT is for the team I get to work with,” he said. “My closest friends at this school, I have met through the ERT, and they truly make the organization what it is.”

When he arrived at Embry-Riddle in 2017, de Perio had lifeguarding experience and a background in basic first aid. He signed up to complete a Certified First Responder course at no cost, courtesy of the ERT. In 2018, he completed a state EMT course. Now, he’s giving back by training others. He has meanwhile been accepted for an Engineering Co-Op position with Gulfstream – his second – and he’s working toward a career in flight testing.

The ERT currently includes 40 members like de Perio and Ellis – 14 EMTs and 26 CFRs. The team operates on a 24/7 basis. They run dedicated shifts with a full crew, 6 p.m. to midnight daily, and EMTs are on call during the day and overnight.

Campus Safety Officer Mitch Widham noted that he and his colleagues have basic first aid training, but the ERT members contribute a higher level of expertise for dealing with medical emergencies.

“On any given Friday or Saturday night, the ERT members are on campus, volunteering with no pay or recognition, and they’re waiting on a call from us saying there’s a student who’s sick or needs help,” said Widham, who has provided operational oversight for the team since its beginning.

Widham added, “There’s no doubt that the ERT has saved multiple lives. They are truly a wonderful asset to Embry-Riddle.”

Embry-Riddle community members who need emergency medical assistance can contact the ERT at (386) 226-7233, anytime, 24 hours a day. There is no cost for services provided by the ERT.