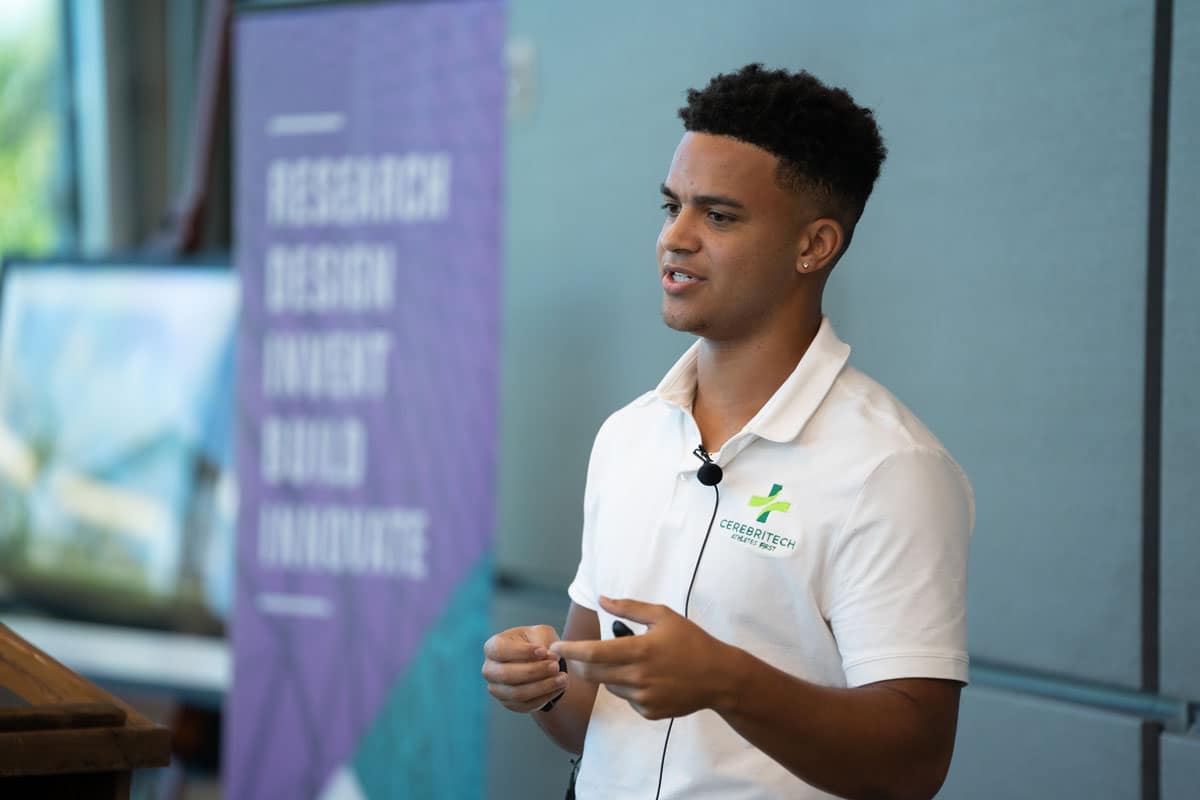 Alex Britton, founder and CEO of CerebriTech, which manufacturers sensors to detect concussion symptoms in athletes in real time, was one of four entrepreneurs to present plans at Embry-Riddle and StarterStudio’s Demo Day, which showcased innovative business ideas aimed at creating high-paying jobs in Florida. (Photos: Embry-Riddle/Bernard Wilchusky)

The first commercially available suborbital balloon technology, sensors embedded in sports helmets that can detect concussions in real time and design/simulation software for 3D printing were among the innovations recently showcased at Embry-Riddle Aeronautical University’s Build Stage Accelerator Demo Day, in collaboration with StarterStudioÒ. The economic-development initiative focuses on new technologies to drive the creation of high-paying jobs in Volusia County, Florida, and beyond. 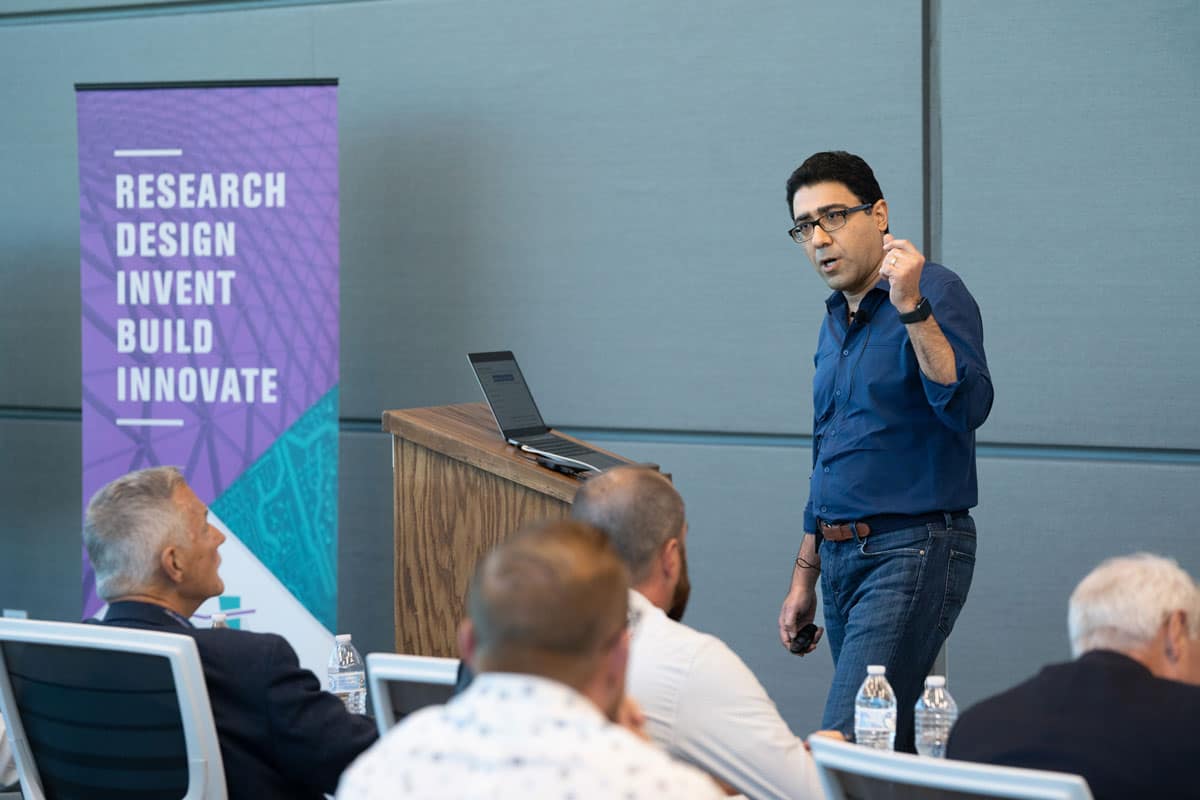 “I’m so proud of all of the startups that participated in this year’s accelerator,” said Dr. Stephanie Miller, Embry-Riddle’s executive director of technology transfer and Research Park initiatives. “The program required an enormous amount of work over a short period, and Demo Day perfectly showcased that. Partnerships with supporters like StarterStudio, and the programs we can offer together, make Embry-Riddle’s Research Park and the local innovation ecosystem stronger.”

Embry-Riddle partnered with StarterStudio to relaunch the accelerator program earlier this year, after a pandemic-caused hiatus. Demo Day was the culmination of a 10-week course that helped company founders hone their market strategies, define key performance indicators, identify funding options and more. At the event, companies founded by Embry-Riddle students and professors, startups already residing in the university’s MicaPlex Technology Business Incubator, and one from the local community pitched their high-tech business ideas to a panel of investors and advisors.

Participating startups are eligible to receive between $10,000 and $25,000 in funding from the StarterStudio Investment Committee’s Evergreen Seed Fund upon reaching specific startup milestones, as well as matching funds in the future of up to $225,000, once additional milestones are met.

The first recipient of such funding is Novineer — a 3D printing design and simulation software firm led by CEO Ali Tamijani, who is also a professor of Aerospace Engineering at Embry-Riddle. The company earned $25,000.

Following the event, another participating company — SpaceLoon, a suborbital balloon firm located in the MicaPlex incubator — was awarded a $255,999 National Science Foundation Small Business Innovation Research grant. With this funding, the company will hire three full-time employees: one postdoctoral or Ph.D. student, and two technicians. 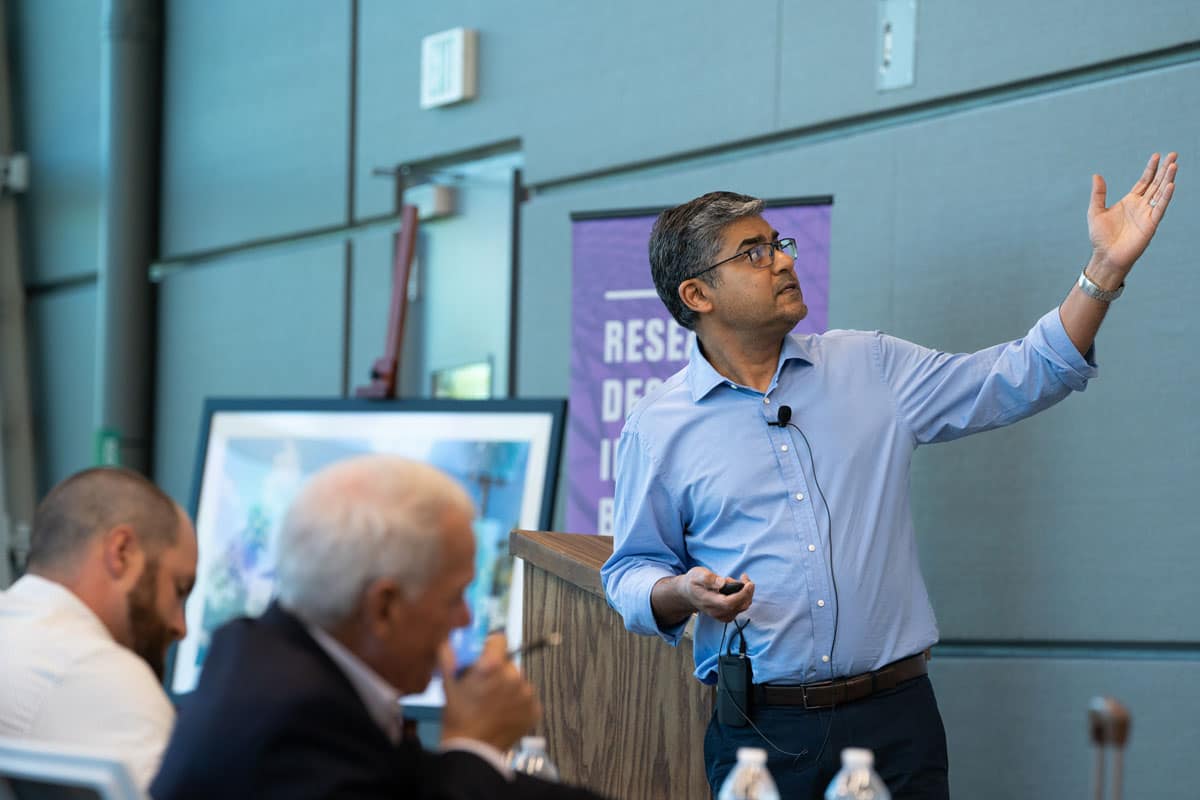 Salman Ahmed, co-founder and COO at CVvlogs, pitched his company’s innovation: a unique job-recruitment app that focuses on video resumes.

CVvlogs, a company developing a unique job-recruitment app, outlined their plan to capitalize on the global online recruitment market’s projected increase to $43.39 billion by 2027. The company’s focus on video interviews that showcase an applicant’s soft skills will save both applicants and recruiters time, while decreasing the chances of qualified candidates being overlooked. Already, the company has 12,000 app downloads, 6,000 registered applicants and 300 registered recruiters in overseas markets.

In spite of 3.8 million sports-related concussions being reported annually, “around 50% of all concussions are undiagnosed,” according to Alex Britton, founder and CEO of CerebriTech, the company developing in-helmet sensor technology to detect concussion symptoms in athletes.

Citing his company’s NASA-patented technology that will allow for real-time assessments of players’ cognitive function and risk of brain damage, he explained that the technology will be marketed to professional, semi-pro and collegiate football and hockey teams — a market comprised of approximately 67,000 athletes. The device can also recommend whether or not athletes should be removed from games, even localize where in the brain an injury takes place.

Britton, who is an Embry-Riddle Mechanical Engineering student, also participated in an entrepreneurship tech talk in spring 2022, where he received advice from industry leaders, including notes on how to tweak his revenue model. The benefits of that counsel was reflected in his company’s current plan, which includes a one-time device purchase plus annual service fee.

Novineer plans to bring a 3D printing design and simulation software to market to make the process of designing, modeling and fabricating better-quality 3D-printed parts simpler and speedier (the software will reduce design time from as high as four days in the current model, to a maximum of 12 hours with Novineer technology). The idea for the product was born partly out of three separate research projects conducted by Dr. Ali Tamijani, company CEO and Eagle professor. Those projects were backed by $2.5 million in funding from NASA, the United States Air Force and the National Science Foundation, which recognized Tamijani with a coveted Early Career Award for Pioneering Research in 2019.

SpaceLoon, developer of the first commercially available balloon capable of reaching the sub-orbital mesospheric region of space, will offer a lower-cost solution for companies to deploy payloads into suborbital space for research and testing. The team is currently seeking $500,000 in seed funding to further develop its technology.

“I am delighted to announce that both Novineer and CVvlogs have decided to continue their startup journey by entering StarterStudio’s Seed Stage Program,” said Dawn Haynes, StarterStudio CEO. “The program started on Aug. 2 and will culminate in a Demo Day on Oct. 4, in Orlando.”