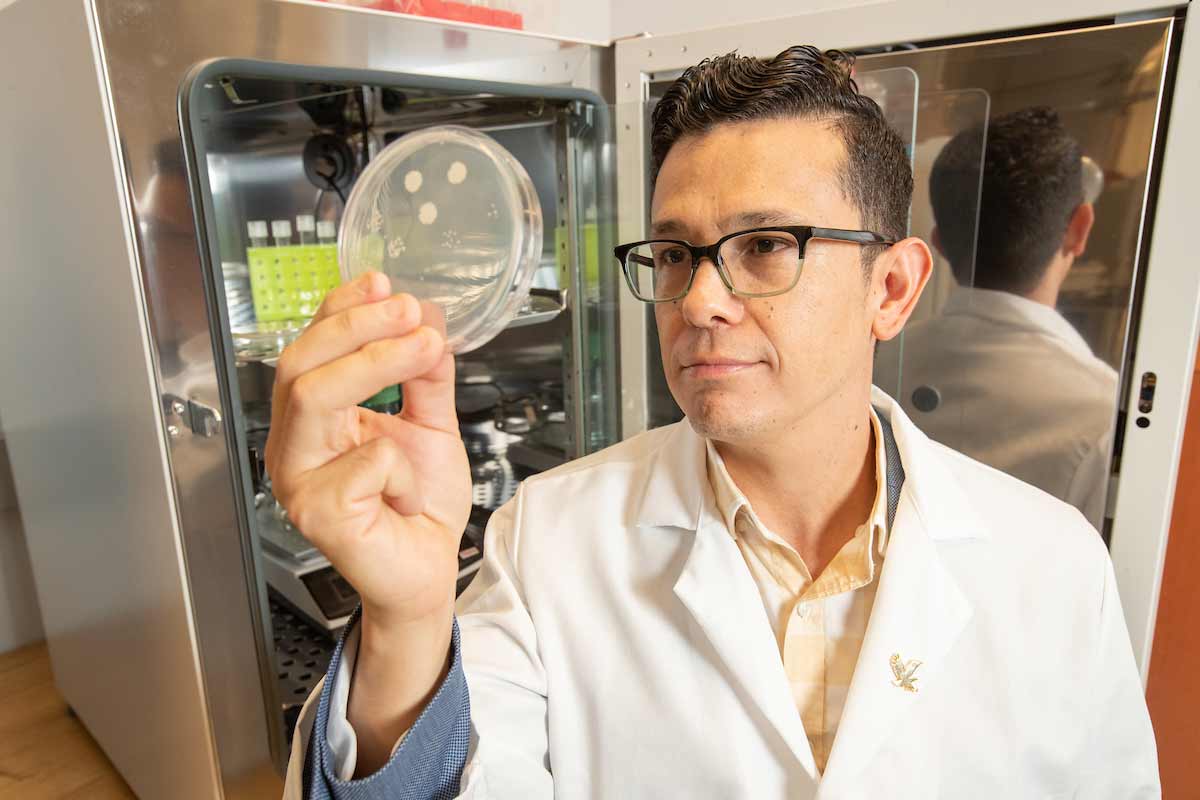 Dr. Hugo Castillo, professor of microbiology in the Aerospace Physiology program at Embry-Riddle Aeronautical University, works in a research lab on the Daytona Beach campus. (Photo by David Massey)

Research by Embry-Riddle’s Dr. Hugo Castillo that challenges conventional thinking about the impacts of low-level radiation exposure has drawn international attention from other scientists — and from the U.S. Department of Energy (DOE).

Castillo, professor of microbiology in the Aerospace Physiology program at Embry-Riddle Aeronautical University, was a collaborator on the Low Background Radiation Experiment (LBRE) started by Dr. Geoffrey Smith at New Mexico State University. That research suggested that background levels of radiation do not negatively interfere with cellular growth and are in fact required for cells to grow normally.

“The first thing that called my attention to this project,” Castillo said, “was the paradigm shift implied by considering ionizing radiation, not just as a source of destruction and negative effects for life, but also as an evolution-driving force that all organisms on Earth have experienced since the origin of life.”

Since the research was published in the peer-reviewed journal PLoS One in May, research groups all over the world have taken note of it, and DOE officials have solicited a proposal for further research using different types of cells, Castillo said.

The research team used cells from the bacterium Shewanella oneidensis, which can break down metals and survive with or without oxygen. To deprive the cells of background levels of radiation, researchers grew samples at an underground laboratory hosted at the Waste Isolation Pilot Plant, a DOE facility for storing legacy nuclear waste, near Carlsbad, N.M. Next, researchers compared those samples with control cultures grown under normal conditions.

Specifically, Castillo and colleagues analyzed all messenger RNA molecules expressed by the genes of the S. oneidensis bacterium. Messenger RNA molecules serve as the transcriptionists for life’s genetic blueprint, DNA. This technique, called “transcriptome analysis,” revealed a statistically significant change in gene expression — and in particular, a down-regulation or reduction in the expression of certain proteins — within the cells grown underground, without background levels of radiation.

Currently, governments regulate human exposure to ionizing radiation in accordance with a framework called the Linear No-Threshold or LNT model, which assumes that exposure to even low levels of radiation is unsafe.

“The current LNT model basically imposes protective measures that, in many situations, we believe are unnecessary,” said Castillo, “leading to overspending in protection and to social conflicts when people are displaced — for instance, in the region affected by the Fukushima release — or to people refraining from receiving medical treatment such as MRIs or CT scans.”

Castillo added that the genes related to protein synthesis and respiration of S. oneidensis cells that were shielded from background radiation as they grew were expressed in significantly lower numbers than in the controls, similar to what happens when cells are stressed by suboptimal conditions of pH or deprived of nutrients.

Castillo joined the LBRE research group at New Mexico State University as a postdoc in 2012. He is currently starting his own radiation biology lab at Embry-Riddle while continuing to collaborate on low-level radiation experiments using mammalian cells and the nematode C. elegans, a widely popular model in radiation biology and biomedical research.

“My lab will be open to any student with an inquisitive mind and an interest in the role of ionizing radiation on the ability of cells to respond to different forms of stress on Earth and in space,” Castillo said. “Working with me, students will learn how to simulate space conditions and how to identify changes at the gene-expression level that explain physiological and behavioral responses – highly valuable skills for biomedical and aerospace careers.”

Two current Aerospace Physiology students, Jenifer Schuman and Haleema Irfan, have joined Castillo’s lab. They are working on his first project aimed at identifying biological models for a CubeSat project that will study cumulative DNA damage in a low-orbit experiment, planned for 2021. “Their first task,” Castillo explained, “will be to study how DNA damage caused by exposure to X-rays and microgravity conditions changes the way cells grow, using three species of yeast — two of which were isolated by NASA scientists from an International Space Station unit.” 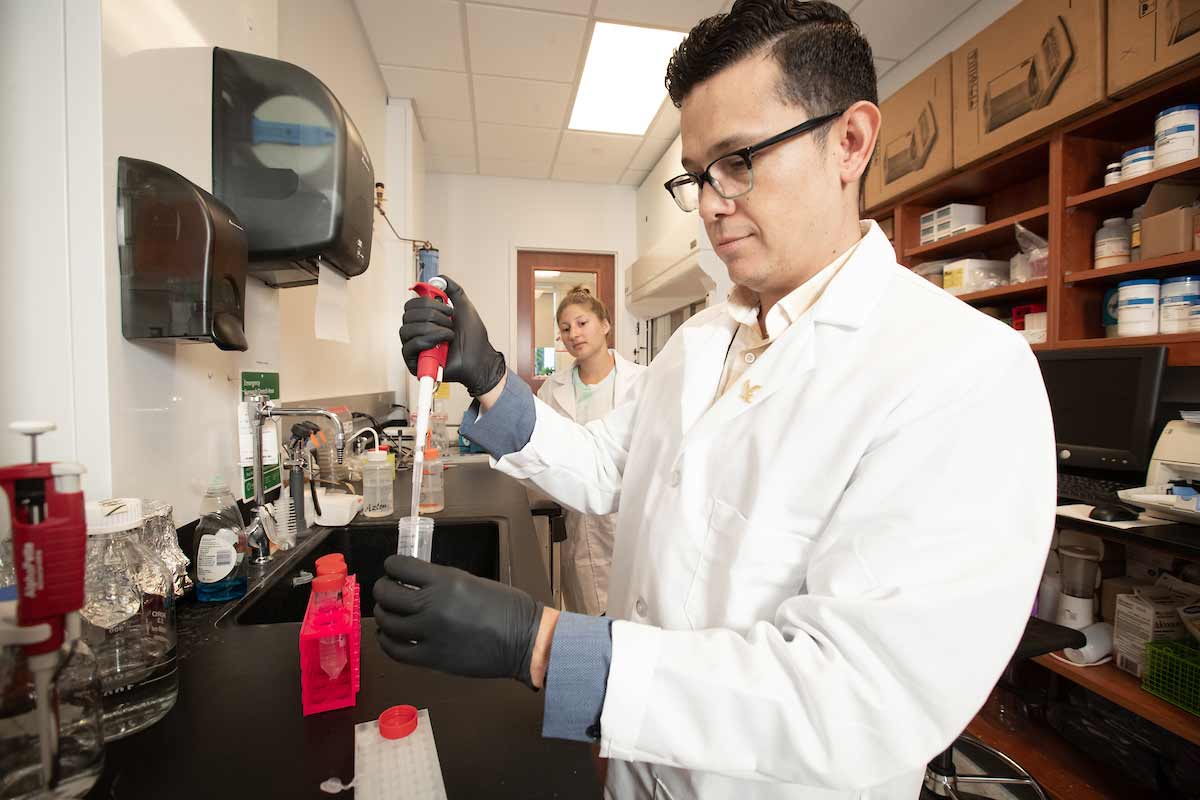 Jenifer Schuman and classmate Haleema Irfan (not pictured) will work with Dr. Hugo Castillo to study DNA damage in a low-orbit environment. (Photo by David Massey)

Launched last year in collaboration with Florida Hospital, the program serves students whose goal is to advance medical research in flight and space or become medical practitioners especially in areas that support NASA, the military and commercial industries.

The first aerospace physiology undergraduate program of its kind in the world, the B.S. degree program currently serves 70 students, providing them with real-world experience in clinical settings at six Florida Hospitals located in Volusia and Flagler counties.

“The aerospace physiology program at Embry-Riddle is attracting increasing numbers of students eager to study or pursue careers in aerospace medicine as well as any other advanced medical practice, including physical therapy, nursing and pharmacology,” said Dr. Karen Gaines, dean of the College of Arts & Sciences. “It is gratifying to see our faculty continue to earn recognition from their peers in the field and beyond.”