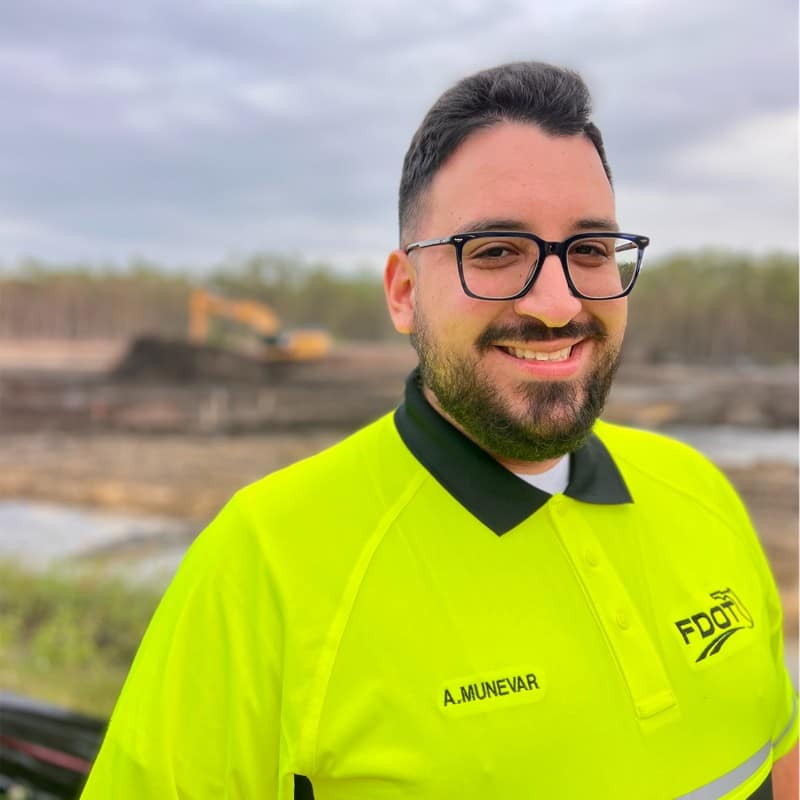 Andres Munevar, a Civil Engineering senior at Embry-Riddle Aeronautical University, had a fairly ordinary childhood: grew up in a suburb, went to public school. But as a first-generation American raised by a single mother — his family is from Colombia — he saw struggle firsthand, and it worked to sharpen his focus.

“Growing up, resources were limited and money was sparse,” he said. “But no matter what, my mother never let me go hungry, go without shelter or go without at least one Christmas present.”

Instead, she modeled perseverance, making a life for them in an unfamiliar country where she didn’t speak the language. Her strength became his inspiration.

“The struggling immigrant story is not unique,” said the Woodstock, Georgia, native. “Rather, it is a rite of passage every immigrant experiences to someday call themselves American and live the American dream.”

For Munevar, who is set to graduate this spring with his bachelor’s and then advance on to a master’s in Civil Engineering, part of his American dream was fulfilled when he recently won first place at Embry-Riddle’s Student Research Symposium for his work using air quality sensors on drones to collect data on air pollution. The data would then be monitored by the Environmental Protection Agency (EPA).

“Right now, air quality data is limited to the ground level at certain locations in the U.S.,” Munevar said. “There is a huge lack of data in terms of air quality, which is becoming more and more of a concern to all people.”

Munevar’s research is a continuation of work conducted by a team of researchers, many of whom have since graduated, and it was previously funded with a $25,000 grant from the EPA. The work is being continued, though, by a “second generation” of researchers, Munevar said, comprised of students Leah Smith, Erik Leirberg and David Benning.

“Embry-Riddle is quite possibly the only school in the country that has resources and aptitude to complete this data,” he said. “This made it a great candidate for this research because we have been able to use our sensors to feed back to the EPA and attach them to planes, cars, drones and even weather balloons.”

Even more rewarding than the research, though, has been the relationships he’s built with professors in the Civil Engineering Department.

“I can genuinely say that all of the professors I've had could tell you where I'm from, what hobbies I have and what my aspirations are,” he said. “This deep connection makes it feel like I am receiving classes from people who care about my future — and I'm certain not many other people can say that. It will be sad to leave one day.”

After graduating with his master’s, Munevar plans to work in the public sector — one day for the EPA or the Department of Energy.

“I am luckily already getting a taste of that through my current internship with the Florida Department of Energy,” he said. “Working as an engineer in the public sector has made me feel that I am giving back to the community that I have lived in for years now.”

Thanks to his mother’s example, Munevar has carved out a promising future for himself, and he plans to give back to his country along the way, fulfilling an American dream powerful enough to reverberate throughout multiple generations.

For Dr. Marwa M.H. El-Sayed, assistant professor of Civil Engineering, Munevar is already in the thick of that journey.

“Andres’s eagerness to learn enabled him to join our research group and present our work in many avenues, including the Air Sensors International Conference in May 2022, in Pasadena, California,” El-Sayed said. “Further, Andres’s commitment has prompted him to become a grader for many classes I am teaching, and he is absolutely loved by students.”

“I would not be where I am today without her guidance, leadership and mentorship,” Munevar said. “Dr. El-Sayed has taken me from student to professional, and all the accolades I have received, I must attribute to her. I am forever grateful.”