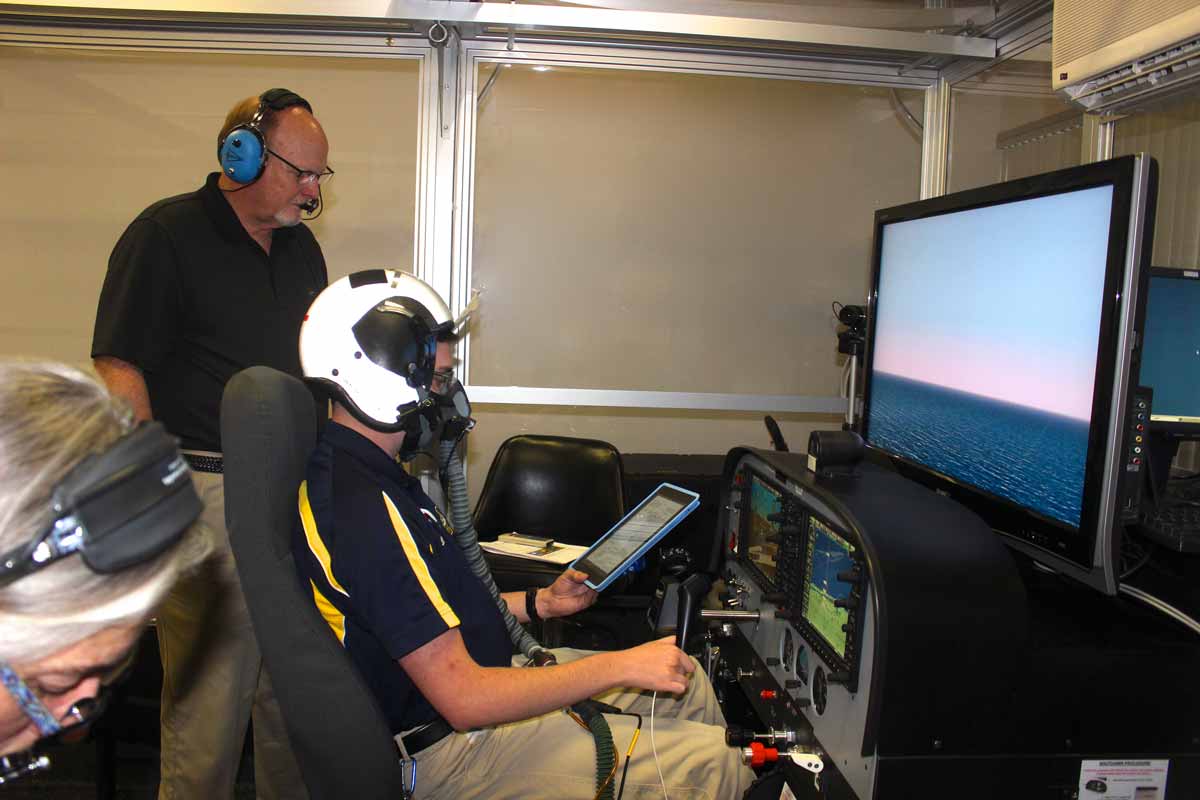 Inside Embry-Riddle’s High-Altitude Laboratory, Joshua Swain took part in pilot hypoxia training, answering questions about his symptoms as he flew a simulated instrument approach, monitored by faculty member Michael Coman. Swain graduated in 2017 and now works as a Geospatial Analyst, specializing in Aeronautical Safety of Navigation for the U.S. Department of Defense.

Helping pilots swiftly recognize and respond to the first signs of deadly oxygen deficiency, or hypoxia, is the focus of two Embry-Riddle research projects that contributed to a U.S. Navy project that won a 2018 Innovation Award from the Naval Air Warfare Center Aircraft Division (NAWCTSD).

University President P. Barry Butler said: “Embry-Riddle is making contributions toward solving some of the U.S. Navy’s most critical problems, including dangerous in-flight physiological episodes among pilots. Hypoxia-response research and training is one of many ways that Embry-Riddle is working to improve aviation safety as well as pilots’ well-being.”

Over the past decade, Marnane noted, the Navy has become increasingly concerned about an increase in hypoxic events (also called “physiological episodes”) suffered by pilots flying at high altitudes, particularly in F/A-18, T-45 and EA-18G aircraft. In September this year, the Navy and the Air Force announced a tandem effort – the Joint Physiological Episodes Action Team – to stop hypoxia and hypoxia-like episodes among pilots.

At altitudes above 10,000 feet, where the air is less dense, hypoxia can strike pilots as the body absorbs less oxygen. Symptoms range from headaches and tunnel vision to tingling fingers and toes, a feeling of suffocation or “air hunger,” turning blue (cyanosis) and loss of consciousness.

In Embry-Riddle’s High-Altitude Normobaric Chamber, 30 research subjects have so far participated in simulated flights with ascents from sea level to as high as 30,000 feet, at different rates of climb. Symptoms of hypoxia were self-reported by the subjects and by an observer in the chamber. In addition, the subjects’ oxygen saturation levels and heart rates were recorded to correlate the onset of symptoms with actual physiological responses.

The goal of Marnane’s project is to assess the impacts of a special On-Demand Mask-On Hypoxia-Training device developed by Lynntech, Inc., a Texas-based technology development company that develops unique solutions for defense, medicine and energy applications.

With traditional continuous-flow training systems, Marnane pointed out, subjects who experience air hunger may be less likely to recognize other signs of hypoxia. Although further research is needed, preliminary results suggest that the Lynntech device “shows promise in reducing the symptom of air hunger.”

In Search Of Hypoxia Risk Factors

For his project, Keebler is looking at the relationship between symptoms of hypoxia, demographic variables, and lifestyle factors among pilots – from their body-mass-index and flight hours to their caffeine and alcohol consumption as well as whether or not they have previously experienced hypoxia.

Graduate students including Richard Simonson, Emily Anania, and Christopher Rarick have played a key role in the research, Keebler said. They have visited various Naval bases to collect data on some 100 pilots who performed tasks inside hypoxia training facilities.

“At the end of the day,” Keebler said, “this work is intended to prevent situations where a pilot is hypoxic while flying a plane. It’s all about making aviation safer for everyone.”