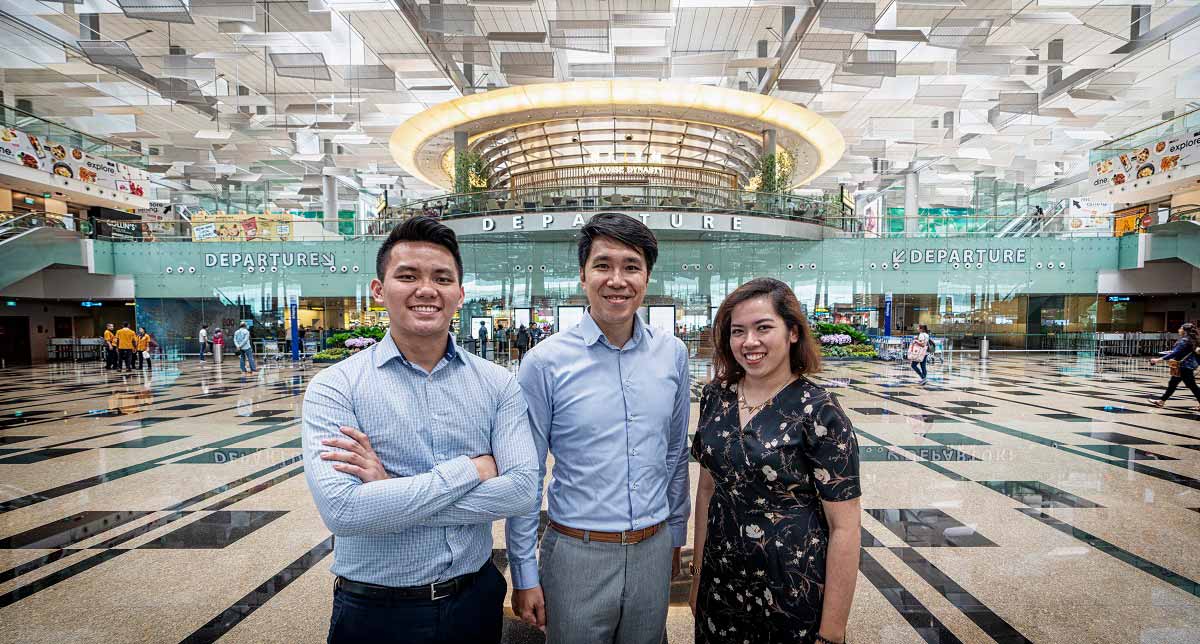 Commercial aviation in Singapore is thriving — and nowhere is that more evident than at the city-state’s Changi International Airport. Take a stroll through any of its four terminals (with a fifth on the way) and you find symbolic reminders of an industry in full bloom. There are lush gardens featuring sunflowers, orchids and butterflies; a kinetic rain sculpture; and in the ultimate expression of growth and connectivity, a nearly 27-foot-tall digital social tree sculpture. This interactive art installation allows passengers to display their photos and videos on a panel of high-definition screens that form the tree's "crown."

But for Alex Ong, who grew up in Singapore watching the aviation industry transform his country and the surrounding region, the real barometer of growth sits just outside those terminals: airplanes.

"Regionally, I have seen the proliferation of destinations and the improvement of connectivity, with emerging markets in Indonesia and Vietnam witnessing exponential growth," says Ong, a recent graduate of Embry-Riddle's Asia Campus. "(But) the starkest reflection of the aviation industry boom is the ever-increasing fleet size of the airlines in the region."

In the past decade, Asian airline jet fleets have increased from 3,600 to 7,000 aircraft, with 250 airlines (up from 200) now operating jet fleets, according to The Boeing Company's Current Market Outlook 2017-2036. The report predicts that by 2036, approximately 40 percent of all new aircraft will be delivered to airlines operating in Asia.

Ong wants to pilot one of those airliners.

In July, he began flight training at Singapore Flying College, through a partnership with Singapore Airlines. Upon completing the program and attaining proper licensure through the Civil Aviation Authority of Singapore, he will be eligible to apply for pilot opportunities with the airline. Embry-Riddle recently started offering an accelerated flight training program to Asia Campus students who are able to travel and study at its Daytona Beach, Florida, facility. (See related story)

"I love my country, and I would like to make a difference and play a part in Singapore’s aviation industry," Ong says.

Regional economic development, a growing middle class with newfound spending power and the expansion of low-cost carrier airlines have contributed to Asia's burgeoning aviation market. In the mid-2000s, the International Air Transport Association (IATA) projected annual average growth rates ranging from 7 to over 14 percent for international air passenger and air freight transport for the Asia-Pacific region and China.

Embry-Riddle's Worldwide Campus Chancellor John R. Watret took note, and in 2007, he started talking with the Singapore Economic Development Board about bringing Embry-Riddle's aviation programs there.

An English-speaking city-state, Singapore's strong aviation sector and its high value on education, with nearly 25 percent of its annual budget invested in education, made it attractive for Embry-Riddle, Watret says.

It was also strategically located.

"You take a five-hour flying radius from Singapore, essentially the distance from Boston to Los Angeles, and you capture 3.2 billion people. More than half the world's population lives there. We knew that China was an open market. Singapore as an access point to Asia was a natural choice." 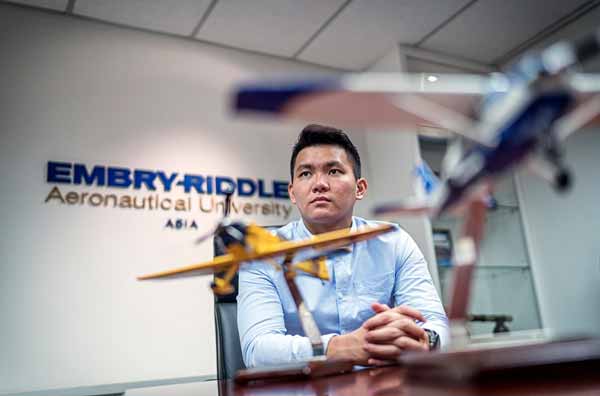 Watret enlisted the help of Graham Hunt, now vice chancellor and head of the Asia Campus, to lay the foundation for Embry-Riddle's Asian presence. As the dean of aviation at a state university in New Zealand, Hunt had established an online Bachelor of Aviation Management program at the Singapore Aviation Academy (SAA). While there, he also created the world’s first degree that integrated academic requirements and recognized pilot license qualifications.

Hunt's experience in aviation education and his previous work in the region were assets, Watret says. But the city-state's bureaucracy remained a challenge, as did its geographic distance from Embry-Riddle's headquarters in Daytona Beach, Florida.

"It took two years to get all of the approvals," he says.

In January 2011, the new Embry-Riddle Asia Campus opened its doors to 29 undergraduate and 22 graduate students.

"They're getting an Embry-Riddle education. Their degree is the same as our students are getting in the states," Watret says. "It's a smaller community, which means there's typically more engagement between the faculty and students and staff, because they all know each other. That in itself is special to them."

Asia Campus alumni are now a growing force in the region. To date, the campus has conferred 371 degrees. It offers two master’s degrees and three bachelor's degrees, and its annual enrollment hovers around 540.

"We want to grow enrollment to 1,000 steady-state," Watret says. A lofty goal, but one that’s necessary to help fill the demand for aviation professionals in Asia.

IATA's 20-year industry forecast predicts that by 2036, an additional 1.9 billion annual passengers will be transported to, from and within Asia Pacific, giving it an overall market size of 3.2 billion.

"The Asian aviation industry requires many more qualified aviation professionals than what are available today. The main threat to the industry is a workforce that cannot catch up with the unprecedented rate of growth," says Embry-Riddle graduate Laphang Chung (‘13), who manages airfield/airside operations at Singapore's Changi Airport.

Chung, who earned an MBA-Aviation from the Asia Campus, says his Embry-Riddle experience uniquely prepared him for his current role, where he oversees a 50-person, 24/7 operations team.

"My MBA cohort consisted of professionals from many parts of the aviation industry throughout Asia. Very often, learning was not confined to the curriculum, but rather, through the collective sharing of real-life experiences and problems from various sectors of the Asian aviation industry. This, to me, was invaluable."

Hunt says Chung represents a new professional model for the aviation industry in Singapore and the greater region.

"Asia has now acknowledged the reality that aviation in the 21st century cannot be like it had been in the 20th century, and that the need for the ‘professionalization’ of aviation education can only be achieved within the context of a university program working closely with ICAO and national regulatory authorities," Hunt explains. "Embry-Riddle Aeronautical University is one of the very few institutions in the world that can meet these challenges of the 21st century."

Campus Life in a Singapore High-Rise

When Dian Adnan, a 2015 graduate of Embry-Riddle, enrolled at the university’s Asia Campus in Singapore in 2013 there were no student clubs and very little, if any, campus life, per se.

"I was part of the pioneer batch of full-time students at Embry-Riddle Asia," she says. "At that time, there were not many facilities or programs available to us. However, that made it more valuable when we would organize out-of-class activities ourselves for students to enjoy and bond with one another; and the school was very receptive and supportive of the ideas."

Now a flight operations coordinator for ExecuJet Aviation Group, a private aviation jet company, Adnan says she formed a tightknit group of friends at Embry-Riddle, despite its setting: a high-rise building in the midst of Singapore's financial district.

Asia Campus Vice Chancellor Graham Hunt says in many ways the campus is much like any other undergraduate university. More than 85 percent of its students are "traditional," pursuing their degrees in a classroom setting, on a full-time basis, he says. It departs from U.S. norms in that it offers no residence halls and its three leased classrooms are in a building that also leases space to several other non-local educational institutions. The building also houses a fitness center, a library and a lounge area, which are shared by all of the students.

Alex Ong, a 2018 Embry-Riddle graduate, says when he started his Embry-Riddle education in 2015, he noticed something was missing.

"Because we do not technically have a physical campus, many students would find themselves simply coming to class, returning home, completing assignments and then repeating the same routine the next day, with no real college experience," he says.

Ong set out to change this.

In spring 2016, he campaigned and was elected president of the newly instituted Asia Campus Student Government Association (SGA). He and his party — three fellow students who would serve as vice president, secretary and treasurer — campaigned largely on creating student engagement opportunities.

One of their first tasks was to expand the existing one-day freshman orientation to a two-night, off-campus experience. "We organized many activities for the camp that bonded students from all demographics and classes, even alumni. For many of us, the camp gave us the first feeling of a true college experience," Ong says.

Under Ong's leadership, the new SGA also established a Women in Aviation Chapter, a scuba diving club, a flight simulator club and an intramural football (soccer) team. They also hosted student industry field trips to Airbus, The Boeing Company and others.

"The thing that's neat about it, is because it's new and because it's small, they're building traditions right away. They're starting and growing up and coming together," he says.

2013: The campus starts offering its undergraduate programs independently, under Singapore's Council of Private Education program. Its operating agreement with UniSIM ends, but it continues to partner with SAA to offer its graduate programs.

Feb. 19, 2016: The Asia Campus and Telangana Academy for Skill and Knowledge sign a memorandum of understanding to collaboratively develop professional education opportunities in aviation corporate scholarship and research to benefit the aviation workforce of India.