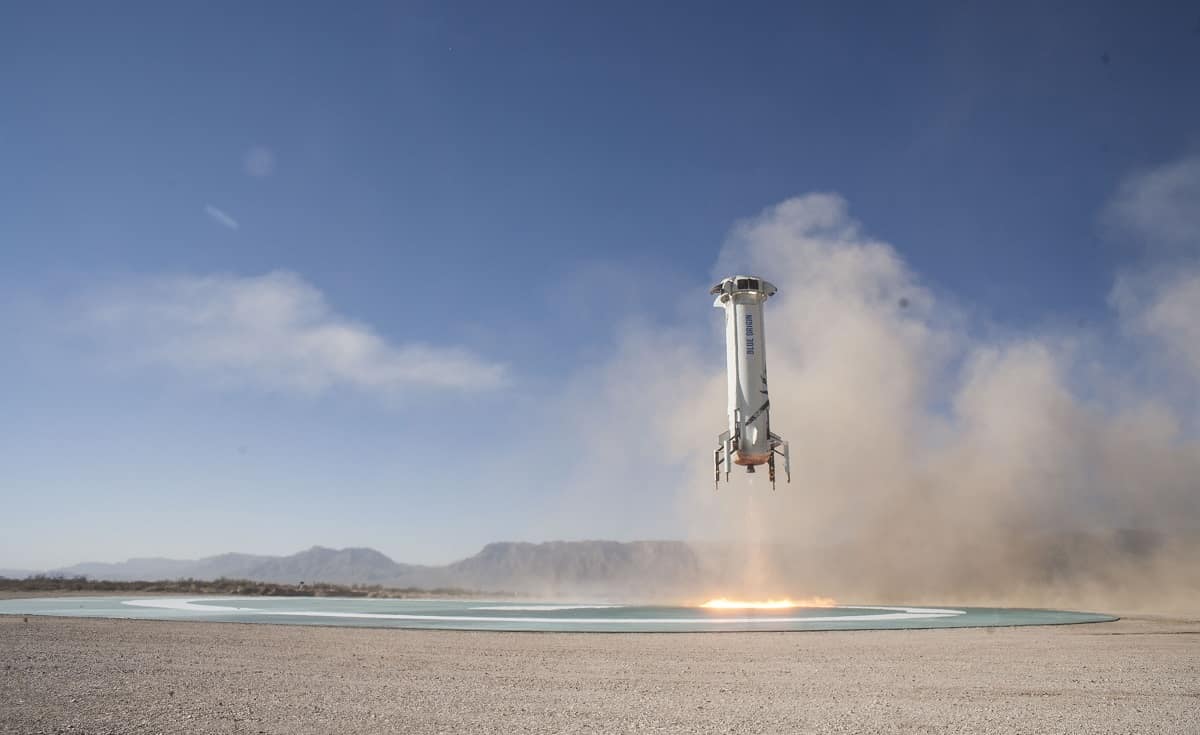 For less than four minutes at the edge of space, T-cells from mice in an Embry-Riddle Aeronautical University experiment in partnership with the University of Texas Health Science Center and the Medical University of South Carolina were exposed to microgravity onboard a successful Blue Origin launch in the hope of one day finding new treatments for cancer.

The payload from Embry-Riddle’s Daytona Beach Campus flew Dec. 12 on Blue Origin’s New Shepard space vehicle to assess how microgravity impacts the cellular processes of T-cells or T-lymphocytes, which develop from stem cells in the bone marrow and are key to the immune system.

The suborbital rocket, launched from Blue Origin’s West Texas Launch Site, traveled about 62 miles or close to 330,000 feet above Earth carrying two payloads that Embry-Riddle students, faculty and alumni had a big hand in designing and building.

The second Embry-Riddle payload is studying how microgravity affects genes that play a role in tumor growth. Embry-Riddle’s two experiments were part of 12 commercial, research and educational payloads onboard the first flight of Crew Capsule 2.0, which according to Blue Origin had the largest windows in space.  Known as Mission 7 (M7), the mission also featured the next-generation booster.

“Today’s flight of New Shepard was a tremendous success. It marks the inaugural flight of our next-generation Crew Capsule as we continue step-by-step progress in our test flight program,” said Bob Smith, CEO, Blue Origin. “Congratulations to the entire Blue Origin team on a job well done and to our payload customers that gathered important data on the suborbital environment. Gradatim Ferociter.”

In the first Embry-Riddle experiment, the CRExIM (Cell Research Experiment In Microgravity) suborbital NanoLab was a multidisciplinary effort between students and faculty in Embry-Riddle’s Spaceflight Operations degree program and Aerospace and Mechanical Engineering departments, who partnered with other teams from the University of Texas Health Science Center at San Antonio and the Medical University of South Carolina.

Dr. Pedro Llanos, Embry-Riddle’s assistant professor of Spaceflight Operations and principal investigator on the T-cell research, said the collaborative team worked around the clock for two years to prepare the suborbital payload with cultured T-cells.

The payload of 12 tubes of T-cells, isolated from mice and grown in a laboratory, were exposed to microgravity, with different markers or cytokines added, for about 3.5 minutes. Cytokines are small proteins that are important in cell signaling.

“These cytokines are not only capable of influencing T-cell behavior, but they are also being used in cancer therapy,” Llanos said. “We already know that microgravity dysregulates the immune system, but the precise mechanisms mediating this effect are not well understood.”

“The scientific goal of this research is to get insights on how brief exposure to microgravity alters the landscape of different types of immune cells,” added Kristina Andrijauskaite, lead science Ph.D. student for the experiment at the University of Texas Health Science Center at San Antonio. “Since space allows us to mimic conditions more similar to what happens in the human body as compared to the lab settings, it is great that we have this opportunity to use microgravity as an important research platform.”

The payload was designed and printed at Embry-Riddle’s Daytona Beach Campus Engineering Physics Propulsion Lab and was housed in a 3D printed structure (10 cm x 10 cm x 20 cm in size). The payload underwent structural testing under different conditions of vibration and motion to assess its survivability. Dr. Sathya Gangadharan, Embry-Riddle professor of Mechanical Engineering and co-investigator of the project, advised the engineering team with the design and testing of the structure of the payload.

“I’m very glad that Embry-Riddle is pioneering this new era of cancer cell research from a biomedical engineering perspective and utilizing its past experiences in microgravity to bring solutions to problems that are critical to the medical field,” Gangadharan said.

Embry-Riddle Ph.D. student Vijay Vishal Duraisamy, lead engineering student on the experiment from the Mechanical Engineering Department, helped develop the NanoLab structure while also testing and integrating the T-cell payload with other members of the team.

“This launch gives us important data and insight on the performance aspects of our payload design,” Duraisamy said. “Moreover, as a student it is highly motivating to be a part of a challenging project that involves space applications.”

Llanos added, “With this suborbital research project, we are nurturing future scientists, technologists, engineers, and mathematicians with enthusiasm to a deeper level that will help them propel their careers.”

The second experiment involving Embry-Riddle is studying the effect of a brief period of microgravity on the expression of genes that play a role in tumor growth.  Dr. Jennifer Thropp, assistant professor of Graduate Studies for Embry-Riddle’s Daytona Beach Campus and principal investigator on the Suborbital Oncologic Gene Expression payload, said the experiment, which is a collaboration with Grand Canyon University and Thermo Fisher Scientific, consists of two modified flasks that were seeded with osteosarcoma cells.

Syringes containing RNAlater were attached to each flask and their contents were deployed just before the onset of microgravity (in the case of the experimental control flask) and just after its completion (in the case of the experimental test flask). Now that the mission is complete, the samples will be analyzed via reverse transcription-polymerase chain reaction (RT-PCR) to determine how the expression of the genes has changed.

Embry-Riddle alumnus Will Jaeger was the primary engineer responsible for the design of the Suborbital Oncologic Gene Expression payload hardware.

“Previous research has shown that microgravity could potentially have an anti-cancerous effect; however, these studies have been done on orbital and parabolic flights, but not on a suborbital flight,” said Thropp, who is the statistician on this experiment, comparing the results of the suborbital flight to those from previous studies that were conducted during orbital and parabolic flights.

The New Shepard vertical takeoff and vertical landing vehicle is capable of carrying hundreds of pounds of payloads per flight and will ultimately carry six astronauts to altitudes beyond 100 kilometers, the internationally recognized boundary of space.

Blue Origin was established by Amazon CEO and founder Jeff Bezos with a bold vision to seed an enduring human presence in space. In November 2015, Blue Origin’s New Shepard rocket became the first to fly to space and return to Earth via vertical landing.