With a Rise in Natural Disasters and Active Shooters, an Embry-Riddle Team Seeks to Protect More Lives during Evacuations 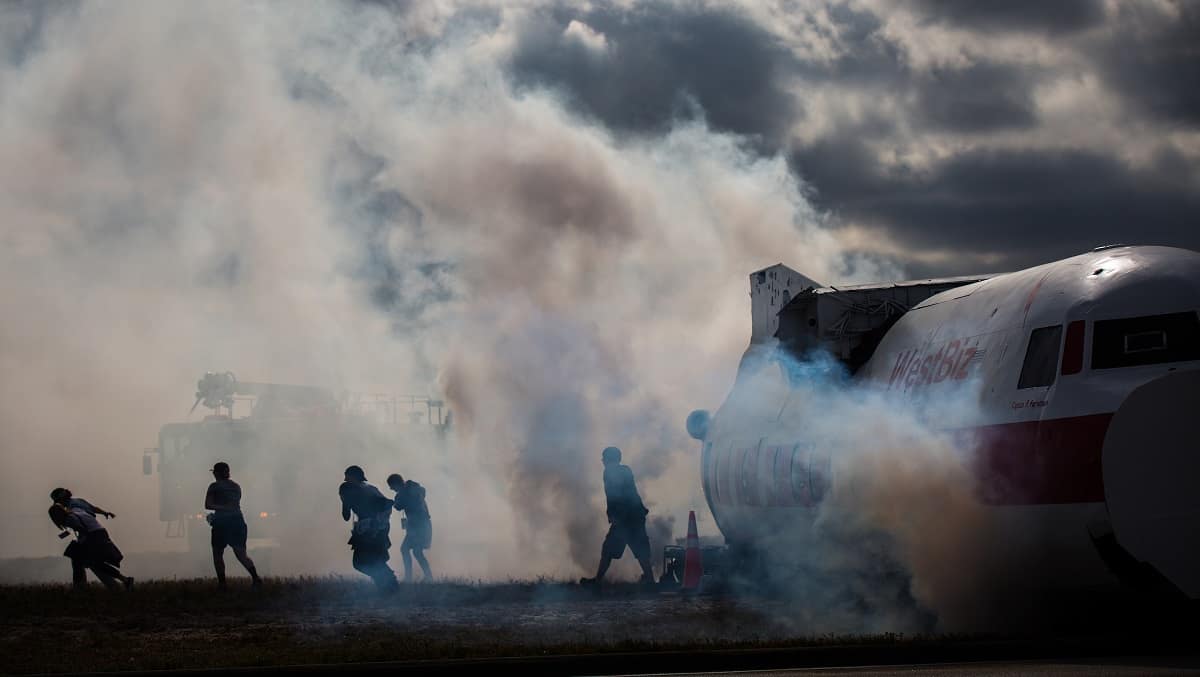 Evacuations are becoming more common place whether it’s the exodus of millions of people during Hurricanes Irma and Katrina or the recent mass shootings in Texas and Las Vegas.

How people react during an evacuation from hurricanes, aircraft accidents or active shooter incidents and terrorist attacks is being studied by a team of professors and students at Embry-Riddle Aeronautical University’s Daytona Beach campus.

The research, funded through a five-year matching grant from the Department of Transportation University Transportation Center, is intended to lead to regulations or policies to reduce the amount of time it takes to evacuate and protect more lives.

“When a situation like this happens, the most important priority is to get people out safely,” said Dr. Dahai Liu, professor in the School of Graduate Studies in Embry-Riddle’s College of Aviation, and aviation lead investigator on the research.  “There are some previous studies in this area, but it is very limited.”

Mathematical models and simulation models are being developed by Embry-Riddle professors and students to investigate how people react to an emergency in closed environments, including airports, aircraft or other enclosed buildings. Embry-Riddle is part of a consortium of colleges and universities that research various transportation topics. On this particular research, Embry-Riddle is part of the Center for Advanced Transportation Mobility which includes collaboration with North Carolina A&T State University, the lead university for the project; Virginia Polytechnic Institute and State University (Virginia Tech); and the University of the District of Columbia -- Community College.

“We are looking at the human side of it. For example, what are the psychological behavioral changes when people experience panic situations,” Liu said. “Do they have a clear idea where to go and do they have a clear understanding of the situation? Hopefully, these model results can lead to practical implications and training strategies, and evacuation and management policies that can be applied in the real world.”

The behavioral aspects are being studied along with the environmental factors such as the number of doors and floors in a particular structure and the size of the corridors. From the terrorist attacks of Sept. 11 to numerous airport and aircraft evacuations, understanding how people react during past emergencies can lead to better evacuation routes and plans as well as training strategies to implement ahead of an emergency. The results could also lead to structural considerations such as knowing how many people can safely evacuate certain venues during a given period of time and how many emergency exit doors are needed.

“Often the chaos that presents from human behavior in the midst of an emergency affects the process of an evacuation,” said Dr. Sirish Namilae, assistant professor of Aerospace Engineering at the Embry-Riddle Daytona Beach Campus, who is working on the research with PhD student Pierrot Derjany. Namilae will use mathematical methods inspired from various other fields to tackle this problem.  “We use molecular dynamics like social force models and queuing-based models to understand pedestrian movement under panic and come up with policy suggestions,” he added.

While the team’s research is looking at pedestrian movement, Namilae said the methodologies can be expanded to include cars on a highway during hurricane evacuations.

The research team reports that in 2015 there were 376 natural disasters worldwide resulting in the death of 22,765 people, many involving pedestrian evacuations. In a recent presentation, the team cited stampedes such as on Sept. 24, 2015 when more than 2,000 people died in Mina, Saudi Arabia in an overcrowding incident during the Hajj pilgrimage, an annual five-day pilgrimage to Mecca. Reported as the deadliest day in Hajj history and one of the worst accidents in the world in decades, the stamped took place before the Jamaraat Bridge.

The team has also been studying numerous airport and aircraft evacuations. For example, on Jan. 6, 2017, a shooting at the Fort Lauderdale-Hollywood International Airport resulted in five deaths and six people were wounded. A passenger who flew from Alaska to Florida with a gun in a checked bag opened fire in the baggage claim area.  About 30 to 40 other people also sustained other injuries during the panic.  A review of the incident cited inadequate plans to efficiently evacuate passengers in an emergency.

On Oct. 28, 2016, an American Airlines Boeing 767’s right engine caught on fire as it was accelerating for takeoff and made an emergency evacuation on a runway at Chicago O'Hare International Airport. Flight 383 to Miami had 161 passengers and nine crewmembers who were evacuated via slides. Twenty people received different levels of injuries in the evacuation which reports described as chaotic.

“This project is important because an emergency is something that can easily happen in our life,” said Yixuan Cheng, a master of science in aeronautics major from China, who has been studying past evacuations and factors that impact human behavior. “The most important goal under an emergency is to protect lives. Studies about how to ensure successful evacuation when emergencies happen can contribute to this important goal.”

“Airport operators can use the results as a benchmark to plan or reinforce the airport emergency plan,” Chen said. “By collecting and analyzing the airports’ evacuation time, the Federal Aviation Administration (FAA) can update the Airport Circular (AC) and guide the novel airport operators to prepare their AEPs in different emergent situations.”

The team has built various computer models and a virtual airport to continue to experiment in the coming years and look at variables such as how age impacts how people may evacuate.

Dr. Jennifer Thropp, assistant professor of Graduate Studies in the College of Aviation, is working on the psychological part of the studies and looking at factors such as anxiety, stress, panic, information processing and social forces, including how families and other affiliated individuals move together.

“There is significant variability in how individuals perceive and interpret information and consequently respond during urgent situations, and this variability can become multiplicative when masses of evacuees interact,” Thropp said.

The results of the research, Thropp said, could not only lead to plans for more efficient evacuations and enhanced first responder training, but lead to modifications in egress paths and architecture of future structures.