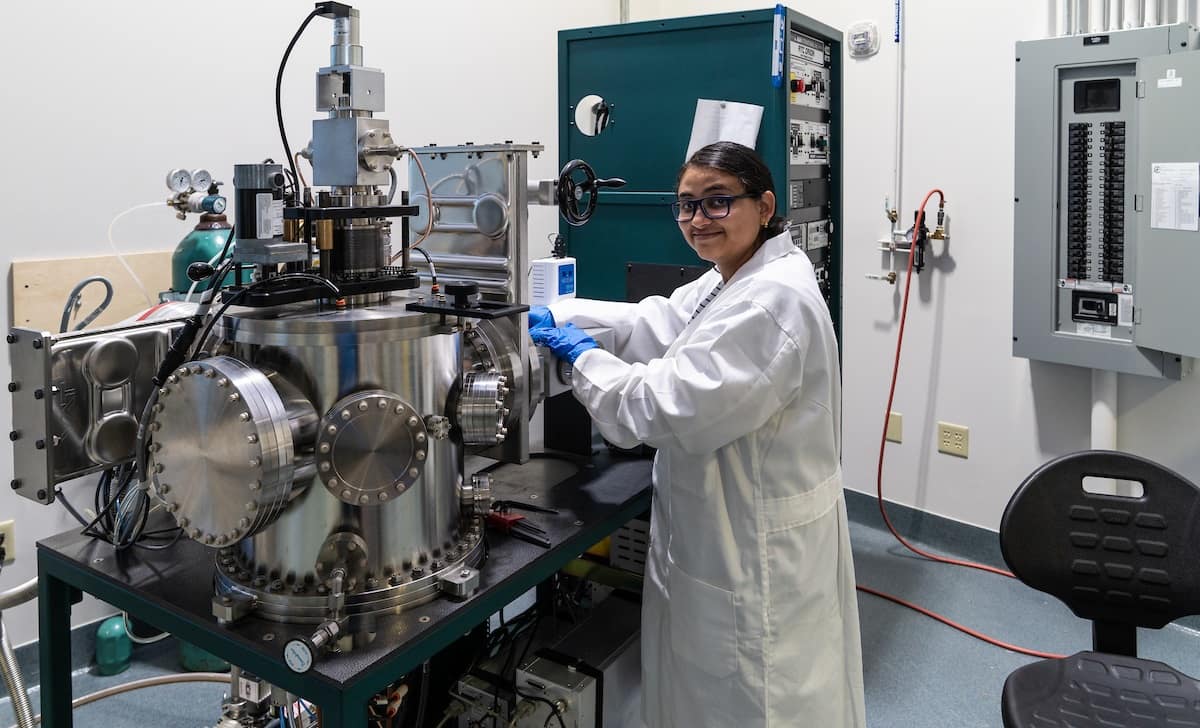 More broadly, said Professor of Aerospace Engineering Marwan Al-Haik, wireless sensors embedded into composite materials could help detect/prevent failures across a host of structures, from automobiles to bridges and even athletic equipment, while they are in use.

“The idea is to build these sensors right into the structure,” Al-Haik explained. “Most failures happen during operation, while the structure is being subjected to a load.”

Yet, he noted, existing inspection technology often involves “somebody with an ultrasound gun” who walks around an airplane on the ground, focusing on critical areas such as joints and seams where defects are most commonly seen. Other inspection methods include dusting surfaces with magnetized metal powder to spot cracks, or the use of fiber optic wires built into layers of an aerospace material – an approach that can actually cause cracks, Al-Haik said.

The sensors are “piezoelectric,” meaning they generate a specific electrical charge in response to different levels of mechanical stress. Interlocked within composite materials, these zinc-oxide nanowires also strengthen aircraft materials, according to Al-Haik. That’s important because the layers of fiber-reinforced plastic composite materials used in aircraft can pull apart or delaminate over time.

Inside the new Materials Lab at the MicaPlex, a physical vapor deposition machine granted to Al-Haik through an Army Office of Research grant makes it possible to very precisely deposit up to five materials at the same time onto a thin substrate. Operating under extremely low vacuum pressure – 100,000 times less intense than normal atmospheric pressure – the machine can sputter incredibly tiny films onto different substrates.

“A human hair is around 25 microns, and we’re working on a scale that’s one ten-thousandth of that,” said Al-Haik, a National Science Foundation Early Career Award winner with six issued U.S. patents and more than 75 peer-reviewed research articles who came to Embry-Riddle by way of Virginia Tech.

If they can calculate the specific electrical signal generated by zinc-oxide nanowire sensors under different load levels, Al-Haik said, those electrical “fingerprints” could be correlated with the exact size of a material defect.

How would structural monitoring improve aviation safety in a real-world setting?

“Airlines could wirelessly receive data to continuously monitor their fleet,” Al-Haik said. “Our hope is that, after we get that correlation between defect size and electrical signal, if it’s a crack length that exceeds, let’s say 5 millimeters, a signal would be sent to an operator on the ground. That person would say, `Uh oh, that’s the 747 and it’s in wing. We’d better take a look at that right away.’”

Ayyagari, a Ph.D. candidate who serves as first author on the paper, used a farming analogy to describe the vapor deposition process. “Basically, you deposit some seeds and add a kind of fertilizer,” she said. “You need wet chemistry to grow the seeds.”

“There are certain hybrid composite combinations that could lead to the development of highly multifunctional composites with better strength, stiffness, damping and electrical conductivity,” the authors wrote.

A native of India who comes from a family of computer scientists, Ayyagari said her passion is “fixing things that already exist and understanding what caused the problem.”

Her work in the lab is painstaking and requires patience, but she said Al-Haik has been an excellent coach. “Before I touch a machine, I know how to use it because he teaches well,” she added. “For experimental research, you need help, especially with these new machines, and he’s very conscientious in sharing what he knows.”

In addition to serving as the self-described “custodian” for the Materials Lab, Al-Haik has been working with colleagues to set up the Composite Lab and the Structures Lab in the MicaPlex. (Further information on MicaPlex labs is available online.)

His current research is funded by internal grant from ERAU.