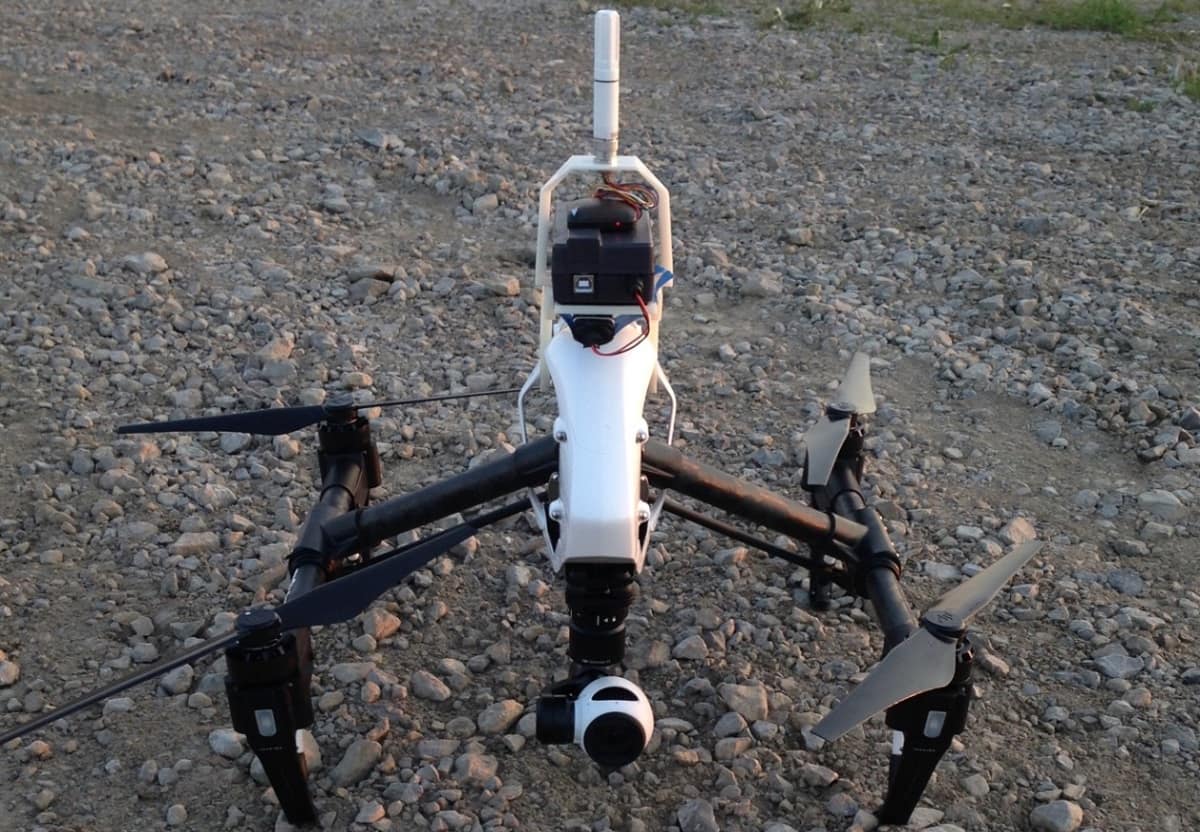 Kevin Adkins and his colleague Adrian Sescu used a heavily instrumented UAS for their study of wind-turbine impacts near the ground. (Photo by Kevin Adkins​)

Farmers earn extra income by hosting wind turbines on small tracts of land, but the large, spinning blades change meteorological conditions near the ground. Those changes can affect crop yields – for better or for worse. A wind turbine might inhibit crop disease, for example, or it could speed moisture loss during a drought.

Adkins and his colleague Adrian Sescu of Mississippi State University published their research findings on May 31 in the International Journal of Green Energy.

Closer to the ground – below the hub of a spinning wind turbine – relative humidity seems to decrease by as much as 3 percent downwind of a single turbine, whereas humidity increases above the hub, Adkins and Sescu concluded. This impact is magnified within a broader turbine array. “This occurs as drier air is mixed downward and moister air is mixed upward,” they wrote.

The research was conducted on two Midwestern wind farms. An instrument-laden small quadcopter-style UAS was dispatched into two different wind-turbine wakes, where it hovered at key points, collecting data both upstream and downstream of the turbine. The hub of one turbine towered 93 meters (305 feet) above a field of winter wheat, while a second turbine had a hub height of 80 meters (262 feet). Baseline meteorological conditions were assessed.

The quadcopter, equipped with GPS and a suite of instruments for capturing temperature and relative humidity levels, made a series of sweeps through the wind turbines’ wake zone, following a prescribed flight path over a four-day period.

After analyzing their data, Adkins and Sescu proposed that “the descending blades [of the turbines] are delivering drier air downward, while the ascending blades are displacing moister air upward” – away from the surface of crop fields.

Such insights could have significant implications for crops, soil and livestock, Adkins noted.

“For farmers, reduced relative humidity over fields could have an impact on their crop productivity,” he said. “It’s my hope that farmers will take this new information and utilize it, leveraging their specialized knowledge.”

Most prior investigations of wind-turbine impacts on near-surface meteorology have been based on computer modeling, Adkins said. “The implementation of the unmanned aerial system [in this study] provides proof of concept for a platform that can also be used for the measurement of other atmospheric parameters with high spatial resolution,” he and Sescu wrote.