When the Earth Rings 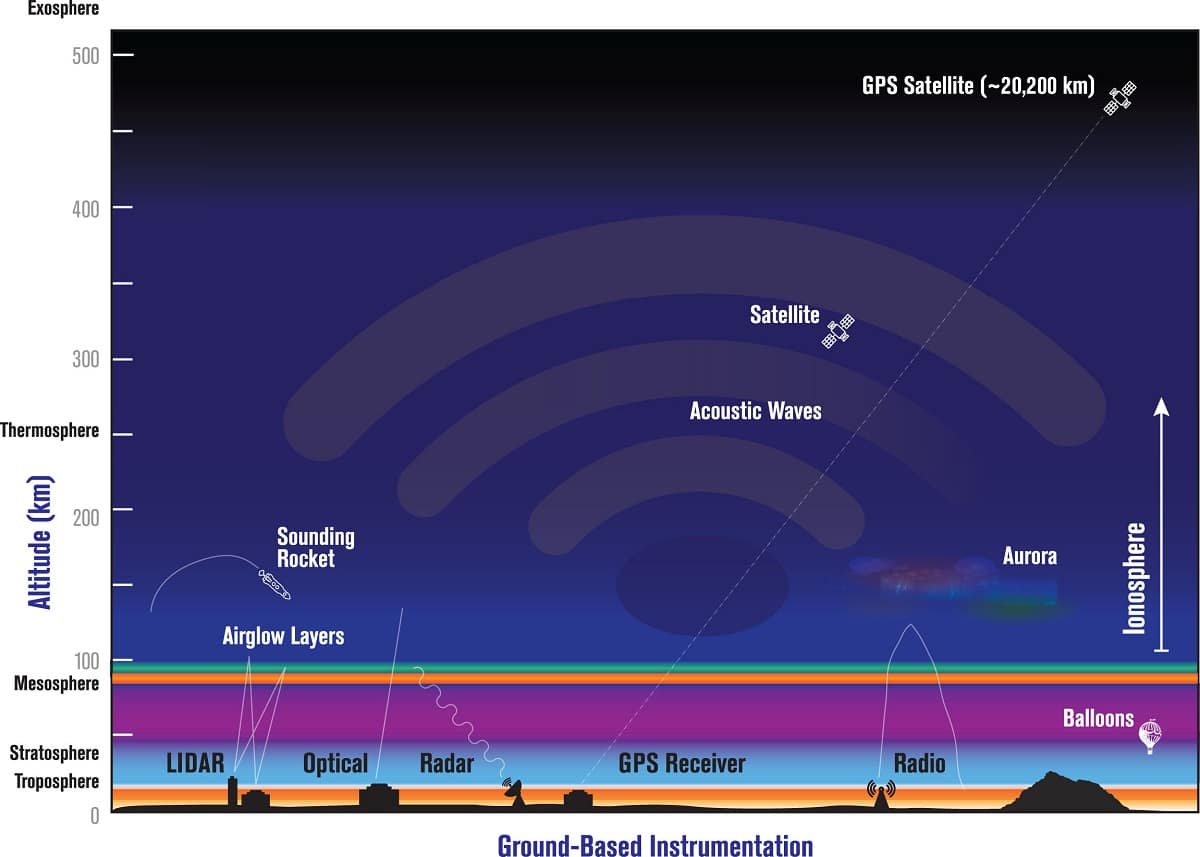 A strong earthquake, volcanic eruption, rocket launch or underground nuclear test can send a train of acoustic shock waves high into the atmosphere. As they barrel upward, the sound waves steepen and intensify into shocks, crashing into space more and more intensely before the particles collapse back down in a signature pattern.

“These waves start as brief packets, but they form into focused narrow bands, indicating a natural resonance or ringing that’s persistent,” says Jonathan Snively of Embry-Riddle Aeronautical University. “This ringing can last for hours, and it’s readily detectable.”

In addition, the acoustic shock waves produced by undersea earthquakes trigger chemical changes that researchers can spot as telltale “holes” in space, says Snively’s colleague Matt Zettergren. These anomalies, resulting from the depletion of electrons in the Earth’s ionosphere – a highly conducting, ionized region of the atmosphere – could offer deeper insights into how earthquakes affect the upper atmosphere.

The reaearch, supported by NASA and published in the February 2017 edition of the Journal of Geophysical Research, remains fundamental; Snively and Zettergren emphasize that their work doesn’t currently suggest a way to predict major earthquakes or the tsunamis that follow them.

Over the long term, however, the work may have important implications for remotely sensing earthquake impacts such as tsunamis. Moreover, understanding what happens in the atmosphere following an underground bomb blast could be critical to global security.

Spanning part of the atmosphere where auroras dance and satellites fly, the ionosphere continuously gains charged particles when energetic solar and cosmic radiation converts molecules into ions and electrons.

This has important implications for communication. When lower-frequency radio waves hit the ionosphere, its particles act like pingpong paddles, bouncing signals back to receivers on the ground or in space. Signals from global positioning systems (GPS) can get scattered by the ionosphere, too.

As with earthquakes, the detonation of a nuclear weapon also leaves a mark on the ionosphere. Embry-Riddle researcher Michael Hickey, the university’s dean of research and graduate studies, recently began looking at how North Korean weapons tests affected the atmosphere in 2006 and 2009. The new project, related to a U.S. Defense Threat Reduction Agency grant awarded in collaboration with James L. Garrison of Purdue University, will compare total electron content (TEC) data derived from satellite GPS with Hickey’s computer model of waves pushed through the ionosphere by ground-based blasts.

Snively and Zettergren – both associate professors of engineering physics at Embry-Riddle’s Daytona Beach Campus in Florida and recipients of National Science Foundation Early-Career Development Awards – are meanwhile deciphering the exact sequence of events that take place whenever the Earth essentially gets its bell rung.

With colleagues at NASA’s Jet Propulsion Laboratory at the California Institute of Technology, Snively and Zettergren use a pair of unique computer models, and they confirm their simulations based on real-world measurements of events. Ionospheric holes (TEC depletion) may only accompany extremely large acoustic waves, they say, but ringing may occur and persist even for much weaker waves. Going forward, they hope to “couple” their models, to run them together.