Astronauts typically experience a gravitational force (G-force) of around three, or three times Earth’s G-force, during launch and re-entry. Embry-Riddle Aeronautical University senior Christopher Vanacore recently sailed past that mark during a session in the National Aerospace Training and Research (NASTAR) human centrifuge, which simulates the Virgin Galactic suborbital spaceflight profile and reaches a G-force of over six, or the equivalent of six times the force of gravity felt on Earth.

“I thought it would be a fun, exciting ride,” said the Spaceflight Operations student. “But as soon as I got to the facility and saw the scientists perform dry test runs of the human centrifuge, I gulped.”

Vanacore, though, aspires to be an astronaut, and so his nerves were mixed with a healthy dose of excitement, even some confidence. After all, his first day of training had already taught him how to cope with extraordinary gravitational pressure.

“The scientists spun me around, performing four flights with 50% flight profiles experiencing mild G-forces,” he said. “Then, they cranked it up to 4.5 G’s in both axes.”

The two axes of G-forces are front-to-back — Gx forces — which can make it hard to breathe; and head-to-toe — Gz forces — which push blood away from the brain and can cause one’s vision to tunnel or gray out.

“I was shocked to see the difference between the two G-force axes,” Vanacore said. “The next day, the instructor told me I was ready to experience both G-forces at the same time.” 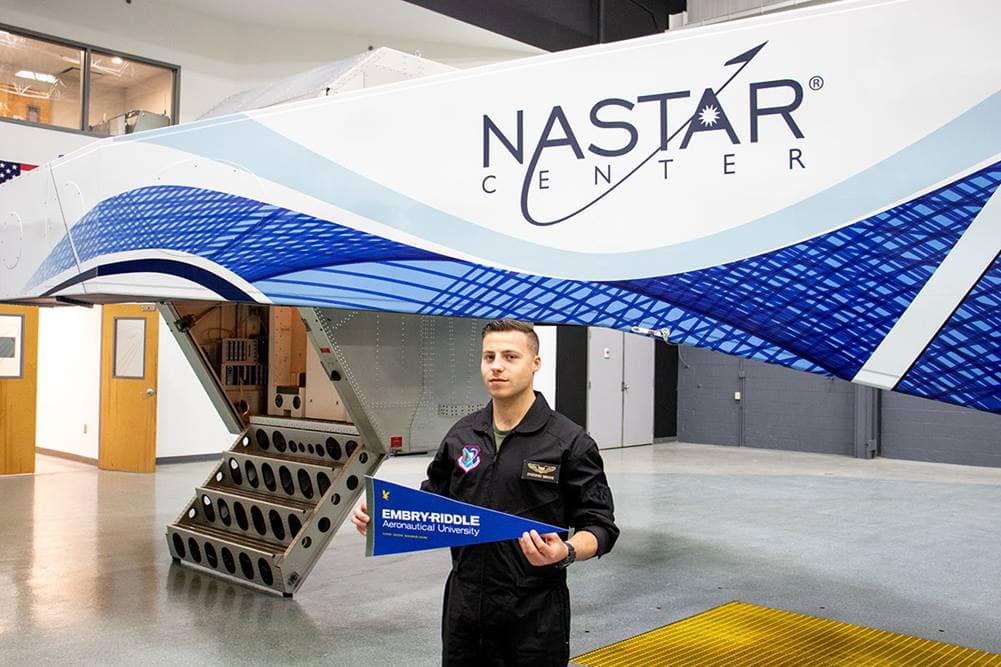 Vanacore didn’t know how his body would react to that kind of stress. Would he vomit? Pass out?

“Experiencing 6.2 G’s on the Gx axis was a great ride,” he said. “I did not feel that I was spun around at all. But exerting those G’s in both directions — X and Z — makes it a bit hard to focus because you must choose which coping maneuver to use, and you must also talk to the instructor who is in the observing bay.”

He practiced breathing — slowly, deeply, evenly. He contracted his lips to exhale, just like they taught in training. That worked against the Gx forces.

To drive the blood that had been pushed down away from his brain due to the Gz forces back up, though, required a different technique: the “anti-G straining maneuver.” He clenched his hamstrings and thighs, fists and upper body. But still, he sensed his vision failing. That’s when he employed the “hook maneuver,” which is named for the sound it creates. He tried it: fast inhale (creating a “huh” sound), hold, then he pressed down with his diaphragm to apply pressure on the thorax and drive blood upward (creating a “kuh” sound). Huh-kuh.

He held his breath, counted to three, relaxed, then repeated the process.

“Understanding the various ways that G-forces may cause discomfort exacerbated my fear, but coping with them in training prepared me,” Vanacore said.

Then, the centrifuge stopped spinning. He had completed his mission.

“Hands-on experiences like these, that get students out of the classroom and into ‘real world’ training scenarios, have an incredible impact,” said Dr. Erik Seedhouse, associate professor of Spaceflight Operations and author of several books on space travel, including Pulling G: Human Responses to High and Low Gravity. “That’s one of the things that make Embry-Riddle special: Our students go off to intern at NASA, work for SpaceX, build hardware to ship into space. For young people who dream of breaking into the space industry, their journey often starts here.”

To become an astronaut, Vanacore — who was born in Hungary, lived part of his life in Italy, then moved to the United States (Lake Charles, Louisiana) when his father, a soldier in the U.S. Army, was stationed there — knows he’ll need more than a trial run in a Virgin Galactic simulator. He’ll need years of experience working in the STEM field, plenty of continuing education and military experience.

Thinking of all the hard work ahead, Vanacore gulped. But his nerves were mixed with a healthy dose of excitement, too, even some confidence.

After all, after conquering the centrifuge, he knew that he could handle a little pressure.