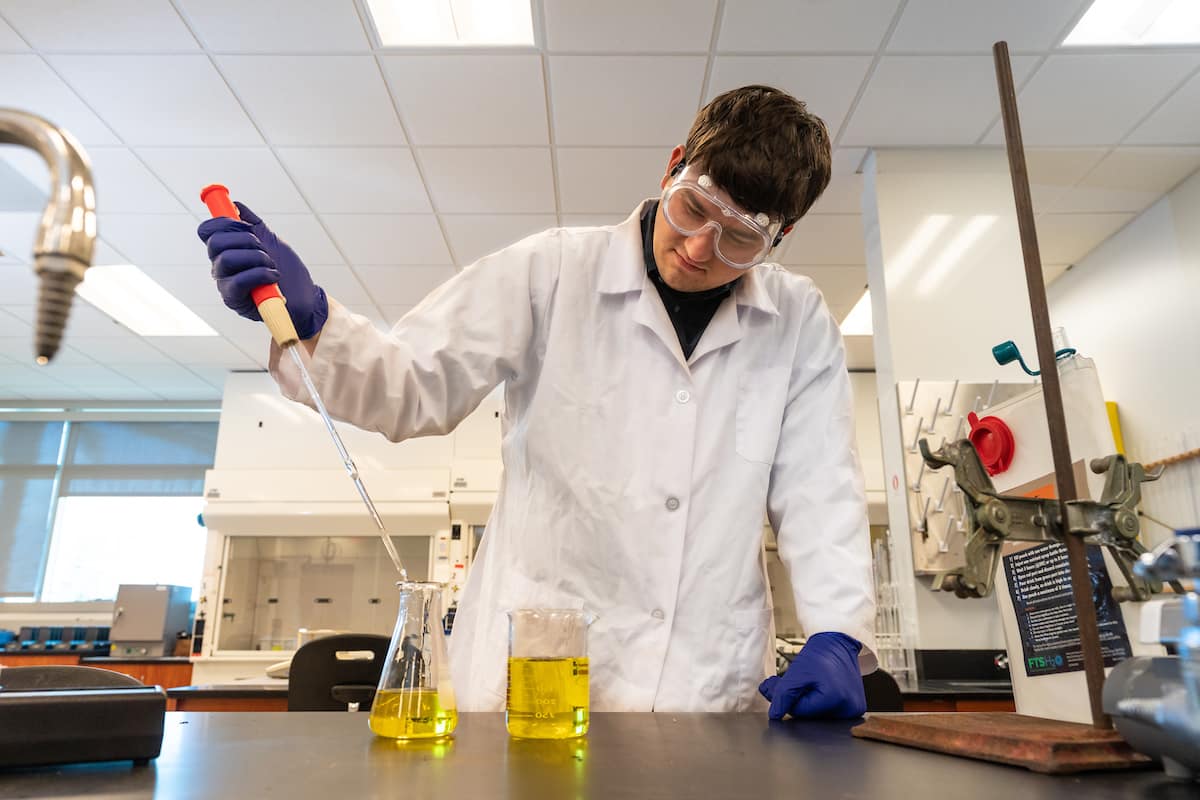 When Embry-Riddle Aeronautical University student John Trzinski was a sophomore, he took two classes that cross-pollinated, resulting in an idea that won the first-place prize for individual projects in a recent Undergraduate Research Symposium — and could help solve a real-life problem.

While studying the life support systems on the International Space Station, Trzinski learned that filtration of the station’s precious water is one of the station’s most “energy-draining and inefficient” systems, he said. At the same time, Trzinski was taking a biology class, where he learned about how cells transport water — that is, through a passive, energy-neutral process known as osmosis.

Trzinski figured “it’d be great if the astronauts on the International Space Station didn’t have to filter waste water mechanically.” He further wondered if wastewater could be put into one chamber of a filtration system, separated by a semi-permeable membrane from another chamber full of a high-concentration liquid. By osmosis, Trzinski reasoned, water from the wastewater would flow to dilute the high-concentration liquid, leaving behind the contaminants in the wastewater.

“The most exciting thing is that this is research I feel could make a difference in the world of human space flight,” said Trzinski. “And the university has provided me a platform to do it.”

Toward the end of his sophomore year, Trzinski contacted scientists at NASA who were working on water filtration. “I figured they’d be the best subject experts to reach out to,” Trzinski, now a senior, said in a recent interview.

Trzinski’s research explores the effectiveness of using forward osmosis to remove urea from a synthesized form of urine. The project relies on synthetic urine so that its content is consistent. The high-concentration fluid that Trzinski uses to draw water out of the synthetic urine contains salt, with the idea that the resultant solution could be used for washing or industrial purposes aboard the International Space Station. Otherwise, the salt could be removed easily through a second simple filtration process, Trzinski said.

“In terms of real-world applications, this could greatly benefit people like soldiers or hikers since it could be used to convert urine into clean, safe drinking water,” said AJ McGahran, assistant professor of chemistry and chemistry lab manager at Embry-Riddle. “We are also hopeful that this would be useful for manned space missions. In all of these instances, storage space is a precious commodity, so being able to minimize the amount of equipment these individuals need to carry in order to maintain a consistent supply of potable water would be incredibly beneficial. For space applications, there is the added benefit of this being a very low-energy process.”

Trzinski is testing the filtered water using two forms of spectrometry, which shine a light beam through the liquid for a precise reading of the liquids’ purity. He will also use H nuclear magnetic resonance.

If Trzinski’s method proves viable, huge amounts of cargo weight could be avoided on space missions. Resupply missions, Trzinski said, often include replacement filtration pumps and the carbon filters that are used in mechanical filtration. The vinyl filters used in forward osmosis can filter ten to 20 times the water that the same weight of carbon filters would process.

“On a standard International Space Station, they have resupply missions, including filtration system parts, every few weeks,” said Trzinski. “You want to avoid the heavy, metallic parts that wear out and need to be replaced.”

As Trzinski moves toward graduation in the spring, he is actively seeking a successor to continue his research. He is considering continuing to work on his project in at least an advisory role. Meanwhile, Trzinski worked last summer at a French firm that produces closed-loop water systems, and he may continue along that path.

“As John conducts this research, he is gaining valuable experience in chemical synthesis, spectroscopy and data analysis,” said McGahran. “While this is a chemistry-heavy project, many of the skills such as handling dangerous materials, designing projects, interpreting data and analyzing results to draw conclusions will translate over to other workplaces. This project will help him continue to develop skills necessary to succeed in a STEM career, and I am excited to work on it with him.”