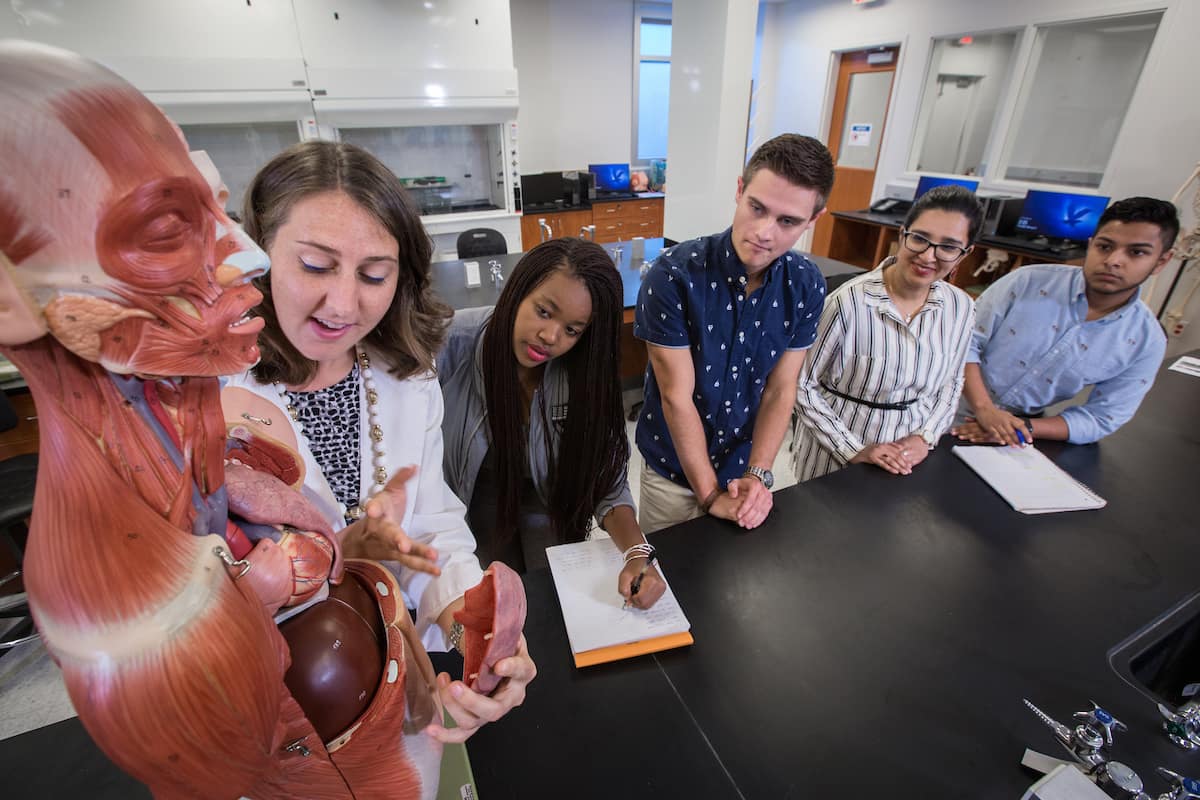 Florida Hospital and Embry-Riddle Team Up to Prepare Students for Careers in Healthcare, Aviation, Aerospace and Research

This fall, Embry-Riddle Aeronautical University’s Daytona Beach, Florida, campus will launch a unique undergraduate aerospace physiology program, in collaboration with Florida Hospital, for students who want to advance medical research and promote the health and well-being of pilots, astronauts, flight crew members and air or space travelers. The program is believed to be the first undergraduate program of its kind in the nation.

The new Bachelor of Science program, to be housed within Embry-Riddle’s highly regarded Department of Human Factors, will offer real-world experience in clinical settings, thanks to a partnership with the six Florida Hospitals located in Volusia and Flagler counties.

“Prior to joining Florida Hospital, I spent 13 years as a commercial airline pilot, logging more than 8,500 hours of flight time,” Deininger said. “We are really excited to have the opportunity to support Embry-Riddle in launching this new undergraduate program, right here in our own backyard. It is a unique program, and we are proud to play a role in these students one day advancing medical research and caring for the men and women who fly – whether it be here on Earth or in space.”

With his background, Deininger sees many parallels between the aerospace and healthcare industries.

This collaboration with Florida Hospital will help Embry-Riddle design a well-focused curriculum that will prepare students to become leaders in the growing healthcare field and the global space economy. By 2024, healthcare employment is expected to increase by 19%, or by about 2.3 million new jobs, compared with 2014, the U.S. Bureau of Labor Statistics has reported. With worldwide space business valued at $330 billion as of 2014, according to the Space Foundation, the need for aerospace physiologists as well as physicians specializing in aerospace medicine is expected to increase.

Embry-Riddle’s aerospace physiology program was approved by the university’s Board of Trustees on March 24. The program was supported both by a letter of commitment from Florida Hospital and a substantial gift from Florida-based philanthropist Dr. Helen M. Wessel, a long-time champion of higher education. Through her generosity, Embry-Riddle will establish a pivotal faculty position, titled the “Dr. Robert H. Wessel and Dr. Helen M. Wessel Endowed Chair for Aerospace Physiology.” Details regarding the gift amount will not be disclosed by Embry-Riddle, in accordance with Dr. Wessel’s wishes.

“An undergraduate degree in aerospace physiology from Embry-Riddle will put students on track to enter medical school, or to pursue careers in the military and civilian sectors,” said Dr. Karen Gaines, dean of the university’s College of Arts and Sciences. “Studying cellular function in space can help advance scientific research, human healthcare and life on Earth. Radiation, G force and other characteristics of extreme environments affect human physiology from the cellular to the whole-body level. Students who learn more about those mechanisms will be in a position to inform healthcare, best practices in aerospace and our understanding of how our cells age.”

“Florida Hospital is delighted to partner with Embry-Riddle to better prepare students for careers in medicine and other health-related fields,” said Ed Noseworthy, Florida Hospital Memorial Medical Center CEO. “Embry-Riddle is a leading aviation and aeronautics institution and is an important member of our community. We are blessed to work together to ensure the development and growth of talented leaders of the future.”

Aerospace physiologists are trained to identify, prevent and manage the impacts that extreme environments can have on human health. The effects of microgravity, cosmic radiation, isolation, rapid as well as sustained acceleration in an aircraft, low barometric pressure and reduced oxygen pressure in the blood can all take a toll on the human body, Gaines explained. Oxygen deficiency (hypoxia), decompression sickness, artery-blocking clots of blood or air (embolism), damage to the middle ear (barotitis), loss of consciousness, microgravity-induced bone loss and other health problems can result from exposure to hostile aerospace environments.

Being able to address ailments related to air or space travel is a critical goal for NASA and the U.S. Air Force as well as private aviation and commercial space flight operations. This is why NASA recently conducted its highly publicized Twins Experiment, by sending NASA astronaut Scott Kelly on a year-long mission to the International Space Station while his identical twin brother, retired astronaut Mark Kelly, remained Earth-bound. NASA wanted to explore how space affects immune-system reactions and DNA aging, among other questions.

As a result of the Twins Experiment, for example, NASA learned that Scott Kelly’s gene expression, which supports key cellular functions such as the production of insulin, had decreased in space. Reduced gene expression seemed to result from decreased “methylation” of Kelly’s DNA in space. The process of methylation, which occurs when certain groups of molecules latch onto DNA, can help regulate gene expression, and is a biomarker of aging. NASA also studied the Kelly brothers’ telomeres – the protective caps at the end of DNA strands that deteriorate as a person ages. After nearly a year in space, NASA reported, Scott Kelly’s telomeres were longer than those of his twin brother Mark.

The curriculum will provide graduates with an understanding of the fundamental principles in molecular and cellular biology, behavioral neuroscience, genetics and heredity, anatomy and physiology, and chemistry and biochemistry. Through the university’s collaboration with Florida Hospital, students further will learn about clinical instrumentation and clinical care, so as to gain real-world experience. The Embry-Riddle program will be the first U.S.-based undergraduate program in aerospace physiology. Gaines noted that there are advanced graduate and clinical degree programs in related fields.

“The new aerospace physiology program at Embry-Riddle will prepare students for careers or further study in aerospace medicine as well as any other advanced medical practice, including physical therapy, nursing and pharmacology,” Gaines said.

The new program should help promote Embry-Riddle’s long-standing goal to attract more women to the world’s oldest and largest aeronautical university. Making the traditionally male-dominated field of engineering more inclusive remains a challenge nationwide, but Embry-Riddle has made progress in improving the gender balance on its campus: The number of women enrolled at Embry-Riddle's Daytona Beach campus has increased from 16.6% of the total student population in 2010 to a current level of 20.8% and this year's entering class of first-time undergraduate students was about 23% female. Nationally, Gaines noted, women earn less than one-fifth of all bachelor’s degrees in engineering and computer science, but slightly more than 40% of bachelor’s degrees in the physical sciences and mathematics. A 2014 student in the Journal of Cell Biology (Eddy et al.) found that women tend to enter life sciences programs at much higher rates than they enter other science, technology, engineering and mathematics disciplines. In fact, women earn nearly 60% of all bachelor’s, master’s and doctoral degrees in biology. The National Science Foundation further reported in 2013 that biology is the fastest growing undergraduate major among minority women. “Because of its 90-year history as a top aerospace engineering university, Embry-Riddle works hard to recruit women students,” Gaines said. “We hope the new aerospace physiology program will initially draw more women to that program, and over time, draw a broader mix of students to all of our other programs, too.”