To the Moon: EagleCam Prepares for Historic Mission 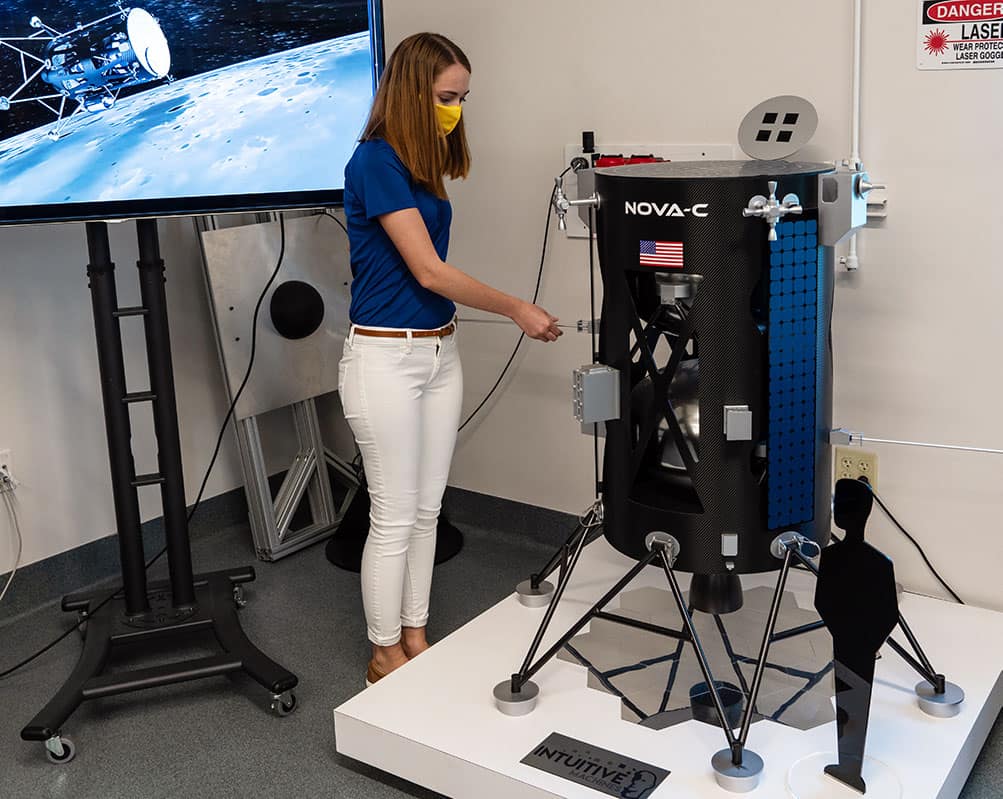 Embry-Riddle students are set to make history next fall as they launch their EagleCam CubeSat to take the first-ever photos of a spacecraft’s descent and extraterrestrial landing on the Moon.

“This is a historic project that hits several firsts and the scientific return on this mission is enormous,” says Associate Professor Troy Henderson, one of three faculty members leading the EagleCam project.

EagleCam’s first-of-its-kind photography will enable scientific discovery through dust plume, dust accumulation and lunar surface image analysis — all of which are extremely valuable to NASA and other scientific communities, Henderson says. The EagleCam project will also be the first demonstration of Wi-Fi technology on the Moon.

The donor-funded project was initiated by alumnus Steve Altemus (’87), president and CEO of Intuitive Machines, an autonomous systems provider based in Houston, Texas. More than 20 individuals and corporate donors have supported the EagleCam project.

When NASA awarded Intuitive Machines a contract to land and operate multiple payloads on the surface of the Moon, Altemus challenged Embry-Riddle’s College of Engineering faculty and students in 2019 to design and build a spacecraft that could detach from his company’s Nova-C Lunar Lander to photograph its descent and touchdown on the Moon. If they were up to the challenge, Intuitive Machines would transport their creation into space free of charge.

“Without Steve, we certainly would not be pursuing this right now,” Henderson says. “Anytime there is an alumnus who is willing to give back to the university — that goes a long way for our students.”

Despite hurdles like the coronavirus pandemic, the EagleCam team – comprised of Henderson, Assistant Professor Eduardo Rojas, Assistant Professor M. Ilhan Akbas and 20 students – has persevered. The design, test and integration of EagleCam, a deployable 1.5U CubeSat payload, is being completed via videoconferencing and in the university’s Space Technologies and Wireless Devices and Electromagnetics laboratories at the John Mica Engineering and Aerospace Innovation Complex.

EagleCam is set to launch in the fourth quarter of 2021, on the Intuitive Machines lander from a SpaceX rocket at Cape Canaveral, Florida. In May 2021, the team will deliver the hardware to Intuitive Machines to be integrated and tested, before heading for final testing at NASA facilities.

“The experience of working on a real-life project, with real flight hardware, doing real testing and development has been invaluable,” says Chris Hays, a graduate student on the EagleCam team. “Participating in this project has reinforced my desire to pursue a space-related career.”

One of the biggest challenges, Henderson says, was constructing EagleCam to withstand the stress of the launch and the harsh environment of space. Additionally, the landing on the Moon will be completely autonomous.

“Space is hard because you’ve got the launch itself with the shock and vibration effects and high speed, then the space environment is insanely cold with radiation,” he explains. “Part of it is just the unknown environment we have to operate in, and there is minimal room for any mistake.”

As part of the EagleCam project, data will be collected and research conducted in areas such as dust-removal technology and image processing, in collaboration with partners that include NASA and the Air Force Research Laboratory. Faculty are also working on a trade study with Intuitive Machines, investigating the use of LTE wireless broadband solutions for data transmission in space.

“Knowing that the hardware I work with daily is going to the Moon makes this project that much more exciting,” Hays says. “Right now, not only are we trying to meet the challenge, but we are also incorporating many different scientific experiments and technology demonstrations.”

Team members are looking forward to personally witnessing EagleCam’s ascent to the Moon and celebrating the successful completion of the Intuitive Machine challenge.

“My plan is to watch the launch in Florida, and then six days later, the Moon landing in Houston,” says Henderson. “I will probably be standing right outside mission control in Houston for the landing — that is my goal.”

END_OF_DOCUMENT_TOKEN_TO_BE_REPLACED

Advice from a First-Generation Student: ‘Never. Give. Up.’