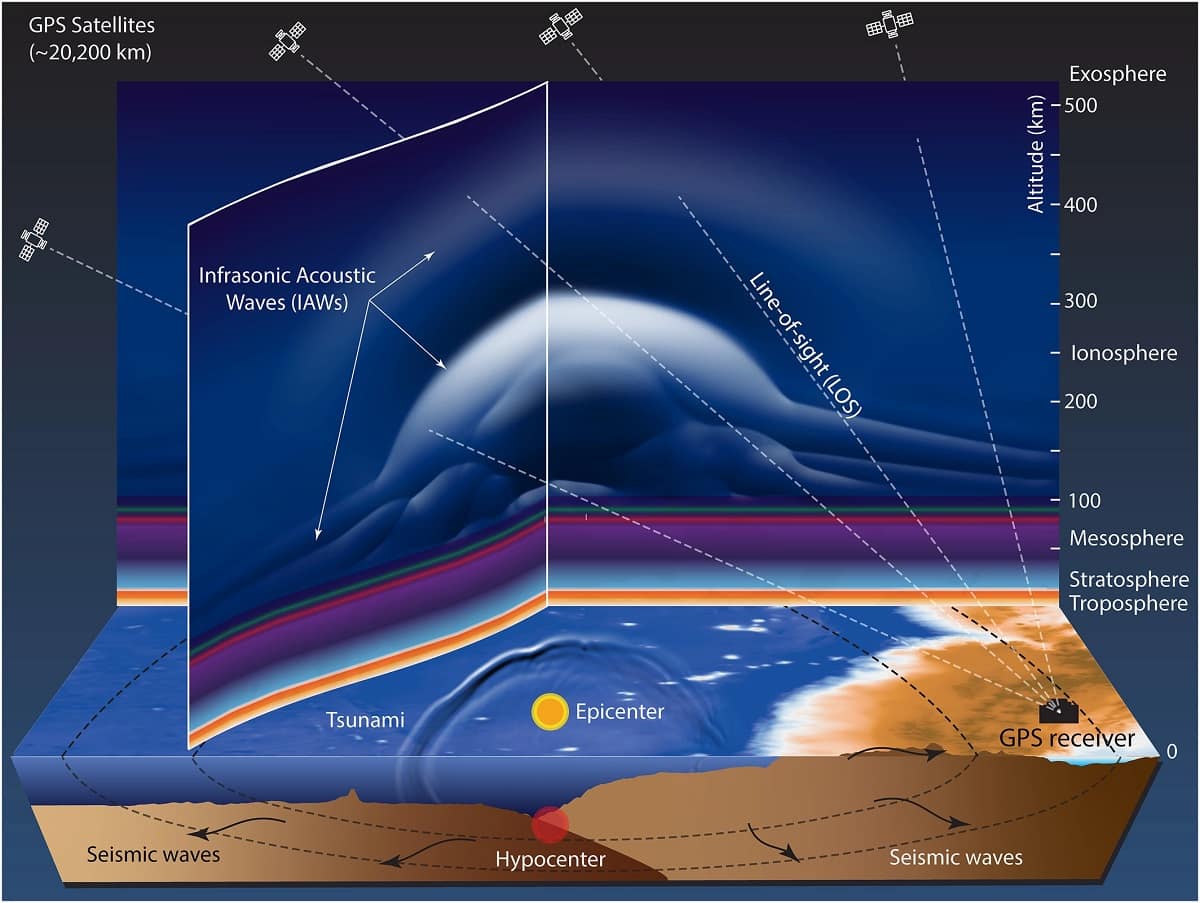 New research by Embry-Riddle Aeronautical University’s Department of Physical Sciences and Center for Space and Atmospheric Research (CSAR), the NASA Jet Propulsion Laboratory and Kyoto University demonstrates the counterintuitive idea that scientists can look skyward, to the Earth’s ionosphere, to glean information about the evolution of large earthquakes.

Earthquakes generate acoustic waves that travel into the upper atmosphere and disturb the bottom side of the ionosphere — the ionized and conducting region of the atmosphere — especially at altitudes of 150-300 km. Ionospheric disturbances driven by waves also affect how radio signals propagate. These include signals from Global Positioning System (GPS) satellites as the signals travel to receivers on the ground. Fluctuations in GPS signals, driven by acoustic waves, can provide information about earthquakes that is distinct from the information measured in seismic data, according to a paper published May 18 in AGU Advances.

Using data documenting disturbances in GPS signals that occurred during the 2016 magnitude-7.8 Kaikoura quake in New Zealand, the researchers were able to calculate when a major fault rupture and large surface uplift likely occurred — timing that could not be derived from seismometer data alone.

“A better understanding of earthquake-atmosphere coupled dynamics is important for seismology and future earthquake and tsunami hazard assessment globally,” said Pavel Inchin, research associate and recent Embry-Riddle graduate, who is the lead author of the paper. “This finding may be particularly relevant for complex or undersea earthquakes that, in some cases, may not be fully characterized in traditional geophysical data sets.”

Important for future studies, the measurable effects of waves observed in GPS data can be directly correlated with the evolutions of large earthquakes and the resultant changes to the Earth’s surface over time. The observed wave effects can help to define simulations and to confirm the timing of the events that occur in an earthquake.

Jonathan B. Snively, director of CSAR and principal investigator of the project, which was funded by NASA, said the research represents an important step toward modeling earthquake processes together with the atmospheric waves that they generate, and their subsequent effects on the ionosphere using GPS signals. The simulations can be directly compared with actual GPS-derived ionospheric measurements and help to understand what can be ascertained from data.

“These case studies are extremely encouraging,” Snively said, “for the prospect of future simulations extending from the solid Earth to space, and towards new and complementary strategies to measure earthquake evolutions.”