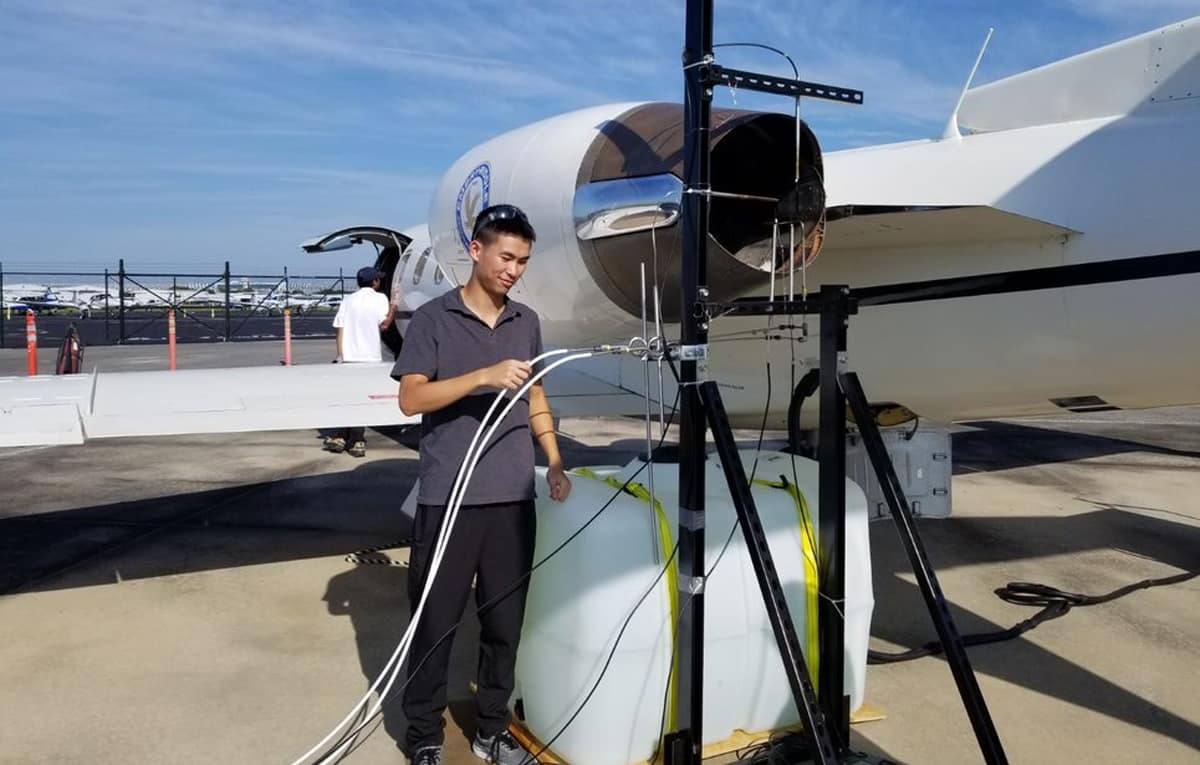 Along with a TV camera crew, a small crowd of curious onlookers recently assembled beside the Flight Line at Embry-Riddle Aeronautical University’s Daytona Beach, Florida, campus. Everyone wanted to see students and faculty members fire up a Learjet to test sensors developed by Sensatek Propulsion Technology.

“It was more exciting than a thesis project, working directly with commercial products and making a direct impact on the aerospace industry,” said Calvin Cai, a Seattle, Washington, native who is pursuing a Master’s degree in Mechanical Engineering. “In the future, I’ll be able to tell employers that I worked with Sensatek. That will be really cool.”

The work provided a backdrop for a segment about Sensatek, broadcast Nov. 20, 2021, by the TV Series Advancements, via CNBC.

Putting Sensors to the Test

While the J34 testing took place inside the Emil Buehler Aviation Maintenance Science building, running Embry-Riddle’s demonstration Learjet outdoors drew an audience and required extra safety protocols. Cai and his team of student researchers built a special testing apparatus to support ground-based tests on the Learjet. They also used a stationary test cell in the lab to capture measurements of sensor performance on the J34 engine.

“It’s a confidence-booster for the students,” Ricklick said of the project. “We try to let them interact with the customer or the business directly. I gives them a sense of responsibility. The work students are doing is not just busy work. It’s affecting the success of a business. Plus, doing fun stuff, getting their hands on real engines keeps students engaged.”

Being able to monitor the hottest parts of a jet engine in real-time has long been a challenge, particularly given the development of increasingly high-performance military aircraft, McConkey noted. Hotter combustion temperatures improve gas turbine efficiency, but all that heat can result in material failures.

To test sensors that are about the size of a ladybug, students engineered a metal frame, held down by a large water tank for ballast. The frame was then placed onto the Learjet, very close to the engine. A Sensatek radio frequency sensor was bonded to the engine and a receiver was attached to the testing apparatus. Advance modeling and testing was done to ensure the safety of people and property, particularly since the Learjet was facing some of Embry-Riddle’s fleet of 80 Cessna 172 training aircraft.

The testing on both engines was a success.

“The Sensatek sensor was able to transmit a signal the entire time while exposed to high temperatures and high speeds,” Ricklick noted.

With aircraft technology continuously pushing physical limits, the Sensatek technology “really is the way of the future,” Lee said. “What [Soto] is doing is what aircraft manufacturers are looking for.” Lee added that he plans to incorporate lessons learned from the Sensatek project into his curriculum for students.

Including Cai, who is also an intern with Research Park tenant VerdeGo Aero, ongoing work with Sensatek has so far involved a total of seven students in two cohorts, Ricklick reported.

Currently, Cai’s team includes Regina Beet, Roy Fernandes and Alex Rodriguez. Former student team members have since graduated and started their careers. For example, after receiving his Ph.D., alumnus Anish Prasad now serves as a visiting assistant professor of Aerospace Engineering at Embry-Riddle. Another graduate went to work for Lockheed Martin Corporation, while yet another launched his own company.

The sensor-testing project was typical of Embry-Riddle’s approach to advancing innovation and entrepreneurism, said Dr. Stephanie Miller, executive director of Technology Transfer and Research Park Initiatives. “Sensatek is a perfect example of what we look for in companies seeking to join the Embry-Riddle Research Park,” Miller said. “Collaboration with our researchers and opportunities for our students is a major goal, and it creates tremendous value for the company as well.”