Space Prospectors: The Next Frontier for Aerospace Researchers? Developing Spacecraft to Explore Asteroids for Natural Resources 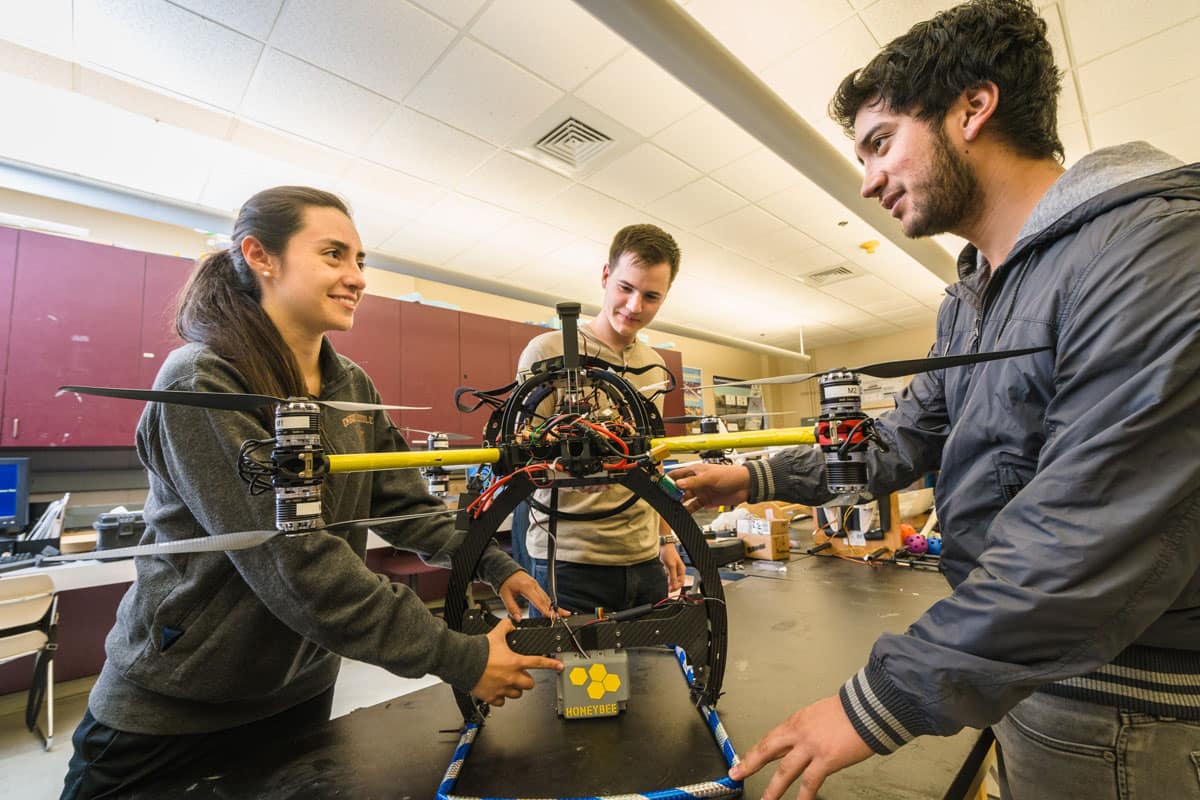 Share:
Someday – 10, 20, 50 years from now – a powerful rocket will lift off from the Kennedy Space Center, bound for a rendezvous with an asteroid millions of miles from Earth.

When it catches up to the asteroid – hurtling through space at more than 60,000 miles per hour – it will release a cadre of small robotic prospectors that will descend to just a few feet from the surface and scour it for minerals, landing when they find something to sample. Eventually, they will return to the mother ship to deposit their samples and head back out.

Hever Moncayo and Richard Prazenica, both assistant professors of aerospace engineering at Embry-Riddle Aeronautical University, hope the technologies they and their students are developing on the Daytona Beach Campus in Florida today will help those robots perform their missions.

For the past five years, Moncayo and Prazenica have been conducting several NASA-funded projects to develop hardware and software that will enable the robotic prospectors to do almost all of their jobs autonomously, so they won’t have to rely on orders from operators millions of miles away on Earth.

NASA is counting on the collaborators to produce the critical components of early asteroid prospectors that will help identify the raw materials that comprise celestial bodies. Space mission planners believe large ships for interplanetary colonization must be built and powered by raw materials found in space because lifting terrestrial materials to orbit is simply too expensive.

To date, most deep-space missions to Mars, comets and asteroids have relied on a single piece of hardware, but Moncayo says there are significant risks to such a strategy. One well-publicized example is the $165 million Mars Polar Lander, which is believed to have crashed on the planet in 1999 when its descent engines shut down prematurely.

“The problem with sending just one piece of equipment to explore is that if something fails you risk losing the whole mission,” Moncayo says. “If one of the low-cost minispacecraft we’re developing fails, there will be others to continue the mission.” 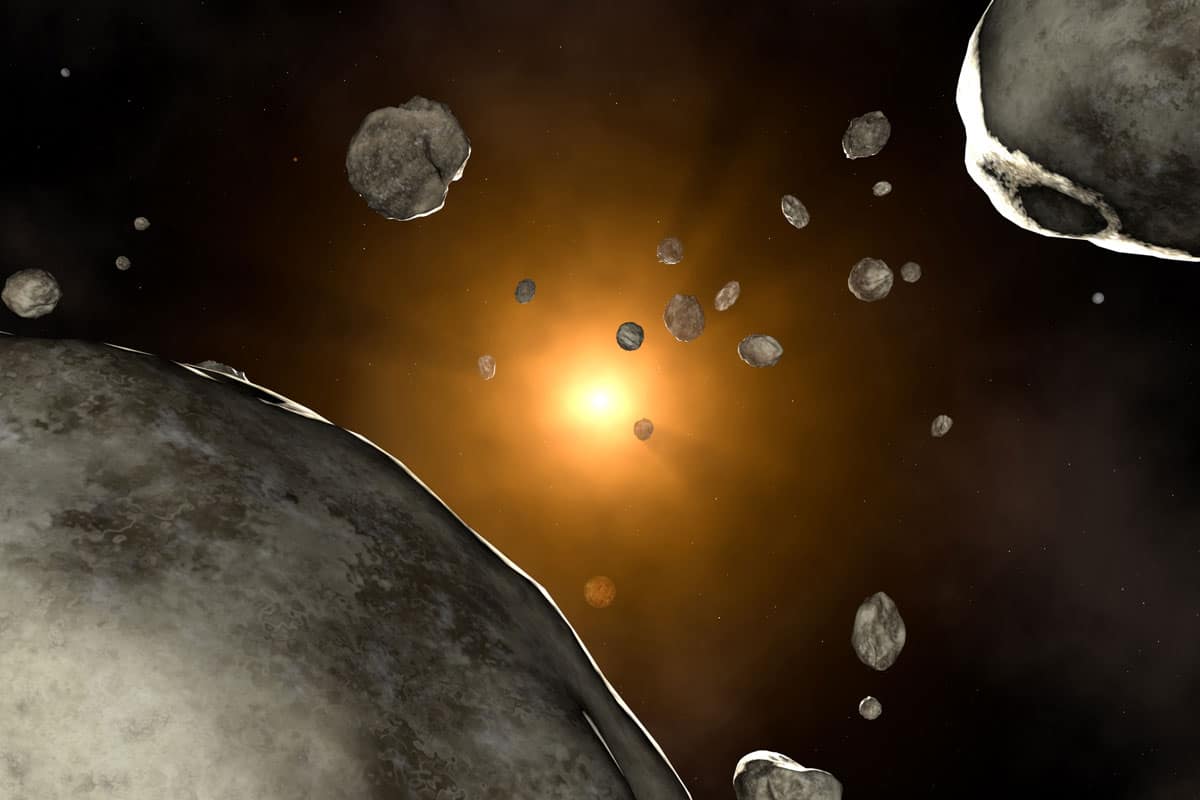 The Curiosity rover has been an unparalleled scientific success during its almost five years on Mars, but the vehicle has only traveled about 10 kilometers and covered an area smaller than the island of Manhattan during that time.

Prazenica says the free-flying vehicles the Embry-Riddle team is developing will be able to move much faster and get into much tighter spaces.

“The ability to fly into a crater or lava tube and get into areas that are very hard to access with a rover, those are the kinds of capabilities we’re trying to provide,” he says.

But a fast-moving spacecraft won’t be able to wait minutes or hours for instructions from Earth like Curiosity, so Prazenica’s team is developing artificial vision-based technologies to help the vehicle navigate in an environment with no magnetic poles or GPS-equipped satellites.

They are leveraging a combination of cameras, LIDAR (a remote-sensing method that uses light to measure ranges) and sensor processing algorithms to “see” an asteroid’s terrain and navigate through it.

“One approach is to look for specific things you know are going to be in the scene based on preliminary flyovers,” Prazenica says. “If you don’t know anything about the site, the spacecraft can analyze the scene and track landmarks as it’s moving through it.”

The researchers have already tested their technologies using a large quadcopter in a simulated extraterrestrial landscape at the end of the space shuttle runway at the Kennedy Space Center.

Moncayo is turning to biological systems for inspiration into how to train the spacecraft to respond autonomously when it encounters a problem.

“We have been working with a new concept over the last five years to mimic the way our immune system works to identify intruders like viruses and bacteria,” Moncayo says.

Specifically, his team has been focusing on the way the thymus evaluates useful antibodies in mammals.

In much the same way, the Embry-Riddle team is teaching the spacecraft’s computer what is normal, then injecting problems into the system and teaching it to recognize and react to those problems.

“We have developed mathematical equations to mimic these biological mechanisms. We collect data when the spacecraft is nominal, then we throw in something that’s not nominal and see what happens,” Moncayo says. “It’s like giving the spacecraft a vaccine.”

Moncayo and former doctoral student Andres Perez illustrate the process in a video from the NASA Swamp Works Research Lab at the Kennedy Space Center, where a prototype spacecraft about 3 feet in diameter and arrayed with circuit boards and small gas thrusters is mounted in a three-axis gimbal that allows it to maneuver in all directions, as it would in space. The researchers purposely knock the spacecraft off its axis, but the system quickly returns it to normal flight.

“We have immunized the spacecraft,” Moncayo says. “Once we collect the nominal data, then we inject small failures so the spacecraft can react and generate antibodies. In future encounters, the system remembers what to do.”

Today, master’s degree student Angelica Betancur is continuing the work of Perez and other students who preceded her, advancing the design and assembly of a new spacecraft. “My thirst for knowledge on space exploration started when I was very young,” Betancur says.

When she began looking for a place to conduct her graduate research, she focused on institutions that would provide the best mix of research experience, quality of education and networking opportunities. “I was attracted to Embry-Riddle’s holistic educational approach – strengthening our professional development, providing the tools to solve real-world problems, and enhancing the student experience through partnerships with industry and government agencies,” she says.

So far, all of the research has been conducted using the quadcopter or in the fixed gimbal, but Moncayo and Prazenica are looking forward to conducting more realistic experiments at the new John Mica Engineering and Aerospace Innovation Complex, or MicaPlex, the cornerstone building of the Embry-Riddle Research Park under construction just southeast of the Daytona Beach Campus.

“At the MicaPlex, we are building a facility to enhance the testing of the spacecraft,” Prazenica says. “We are assembling a huge crane so we can hang the spacecraft from a cable and simulate partial gravity.”

Moncayo says this project has been important for building a strong research relationship with NASA. “This is an important project in our efforts to establish a long-term partnership with NASA Centers,” he says. “Aerospace engineering students working together with faculty are pushing the boundaries of applied research toward innovative, low-cost technologies for the exploration of extreme environments, not only for space missions, but also for terrestrial applications.” 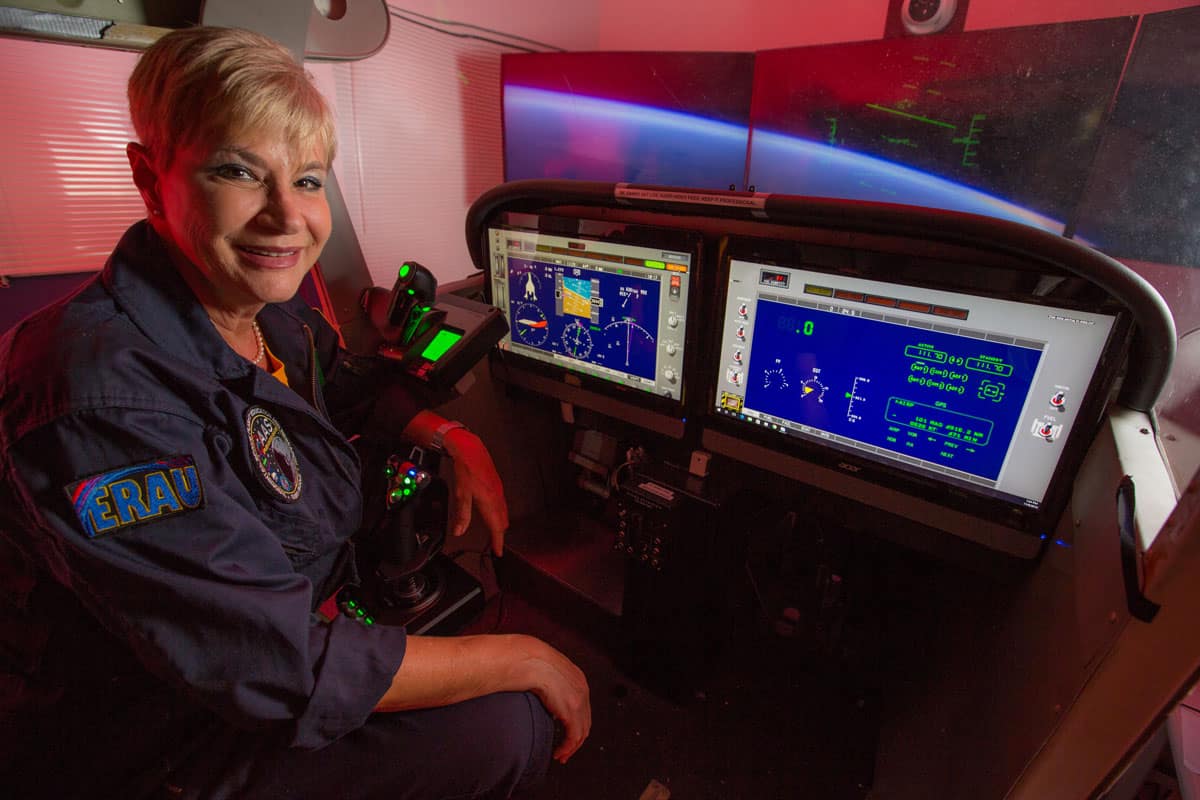 Another raw material essential to future space travel? Water, which is needed to make steam to propel spacecraft. Fuel is one of the heaviest, and therefore most expensive, parts of interplanetary missions, so researchers are developing steam-powered engines that could refuel using water mined in space.

Embry-Riddle Engineering Physics Professor Sergey Drakunov, along with Patrick Currier, an associate professor of mechanical engineering, and Moncayo and Prazenica, are collaborating with colleagues at the University of Central Florida and Honeybee Robotics on a NASA project called WINE, or the World Is Not Enough, that is studying ways to extract water from regolith, the loose soil that covers the moon, Mars and many other celestial bodies.

“In my Engineering Physics Propulsion Lab we are building a spacecraft prototype which will serve as a test bed for a steam propulsion system,” says Drakunov, also associate dean for research in the College of Arts and Sciences.

Among the technical challenges Drakunov’s team is addressing are maintaining the high temperatures and pressures needed for steam propulsion in the vacuum of space, optimizing the nozzle size and shape, and designing propulsion control to produce maximum thrust. The research, which also involves graduate student Samuel Kitchen-McKinley, has been supported by Jay D’Amico, head of the Louisiana Steam Equipment Co.

Even as scientists develop the space-mining technology of the future, policymakers are thinking about the rights and responsibilities that will govern the search for new resources.

She says the 50th anniversary of the Outer Space Treaty in 2017 is “the perfect time to be evaluating these issues, before the technology reaches critical mass.”

Although the Outer Space Treaty of 1967 said that “outer space, including the moon and other celestial bodies, shall be free for exploration and use by all states,” Howard says “there is a big difference between being able to use something and being able to own something.”

As an example, she cites the United Nations’ International Telecommunication Union, which allocates global radio spectrum and satellite orbits to ensure networks and technologies operate with minimum harmful interference. Whether it’s a government or a private company, they may own and have control over a satellite, but they don’t own the actual location where the satellite is in orbit.

Howard says there is currently much discussion in the legal community about building a framework for future space commercialization. “Congress is reaching out to the space law community and really taking the time to get educated and ask really smart questions and think about the ramifications of things, not just the immediate benefits but the long-term challenges,” Howard says.