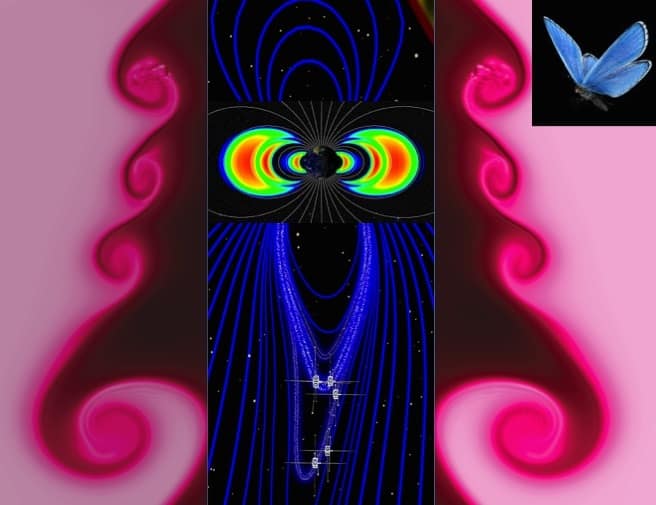 Could the flapping of a butterfly’s wings in Costa Rica set off a hurricane in California? The question has been scrutinized by chaos theorists, stock-market analysts and weather forecasters for decades. For most people, this hypothetical scenario may be difficult to imagine on Earth – particularly when a real disaster strikes.

Yet, in space, similarly small fluctuations in the solar wind as it streams toward the Earth’s magnetic shield actually can affect the speed and strength of “space hurricanes,” researcher Katariina Nykyri of Embry-Riddle Aeronautical University has reported.

The study, published on September 19 in the Journal of Geophysical Research – Space Physics, offers the first detailed description of the mechanism by which solar wind fluctuations can change the properties of so-called space hurricanes, affecting how plasma is transported into the Earth’s magnetic shield, or magnetosphere.

Those “hurricanes” are formed by a phenomenon known as Kelvin-Helmholtz (KH) instability. As plasma from the Sun (solar wind) sweeps across the Earth’s magnetic boundary, it can produce large vortices (about 10,000-40,000 kilometers in size) along the boundary layer, Nykyri explained.

“The KH wave, or space hurricane, is one of the major ways that solar wind transports energy, mass and momentum into the magnetosphere,” said Nykyri, a professor of physics and a researcher with the Center for Space and Atmospheric Research at Embry-Riddle’s Daytona Beach, Fla., campus. “Fluctuations in solar wind affect how quickly the KH waves grow and how large they become.”

When solar wind speeds are faster, the fluctuations are more powerful, Nykyri reported, and they seed larger space hurricanes that can transport more plasma.

Space hurricanes are universal phenomena, occurring at the boundary layers of Coronal Mass Ejections – giant balls of plasma erupting from the Sun’s hot atmosphere – in the magnetospheres of Jupiter, Saturn and other planets, Nykyri noted.

Furthermore, in addition to playing a role in transporting energy and mass, a recent discovery by Nykyri and her graduate student Thomas W. Moore shows that KH waves also provide an important way of heating plasma by millions of degrees Fahrenheit (Moore et al., Nature Physics, 2016), and therefore may be important for solar coronal heating. It might also be used for transport barrier generation in fusion plasmas.

For the current research, simulations were based on seven years’ worth of measurements of the amplitude and velocity of solar wind fluctuations at the edge of the magnetosphere, as captured by NASA’s THEMIS (Time History of Events and Macroscale Interactions during Substorms) spacecraft.

Nykyri’s paper in the Journal of Geophysical Research – Space Physics, published by the American Geophysical Union, was titled “Influence of Velocity Fluctuations on the Kelvin-Helmholtz Instability and its Associated Mass Transport.” Her co-authors were Andrew Dimmock and Adnane Osmane of Finland’s Aalto University; Xuyane Ma and Antonius Otto of the University of Alaska Fairbanks; and Claire Foullon of the University of Exeter, United Kingdom. (Ma currently works for Embry-Riddle.)

The research was supported by the Academy of Finland, the National Science Foundation, NASA and the International Space Science Institute.