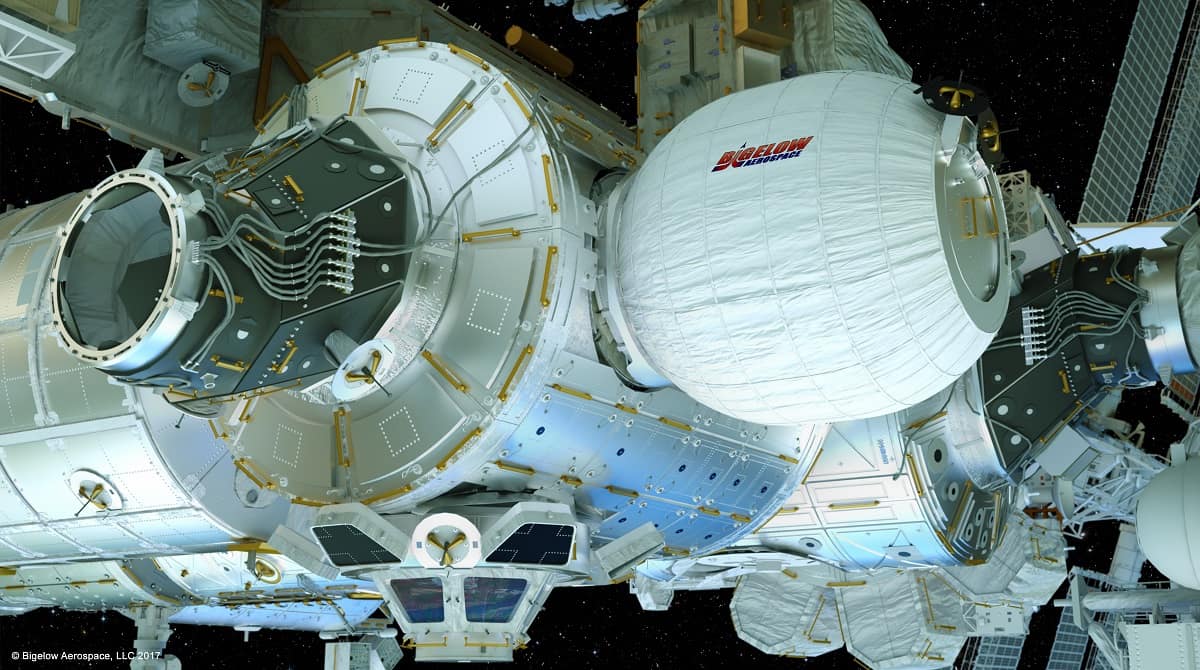 At first, inflatable habitats in orbit around Earth may sound like a dangerous idea, given that the vacuum of space is littered with, as NASA says, “millions of pieces of human-made debris or space junk consisting mainly of fragmented rocket bodies and spacecraft parts created by 50 years of exploration.”

Most space debris is tiny – almost microscopic – but there are also millions of naturally occurring objects in orbit called micrometeoroids. NASA often must move the International Space Station (ISS) away from larger pieces of space debris – the half-million objects in Earth’s orbit that are larger than a marble.

Imagine the consequences of a micrometeoroid or a piece of space junk half that size, moving at 22,000 miles per hour as it strikes an inflatable space habitat.

The Risks of MMOD

Micrometeoroids and orbital debris (MMOD) may seem innocuous because of their small size, but at speeds averaging 10 kilometers per second, they can become killers. In fact, they are the top hazard facing spacecraft, satellites and astronauts, NASA says.

As NASA describes it: “A 1-centimeter paint fleck is capable of inflicting the same damage as a 550 pound object traveling 60 miles per hour on Earth. A 10-centimeter projectile would be comparable to 7 kilograms of TNT.”

Despite such hazards, NASA has been designing inflatable space habitats since the 1960s.

Today, there are at least three inflatable structures orbiting Earth. One was launched in 2006. Another has been docked to the International Space Station (ISS) since April 2016. It’s hoped that soft-sided, expandable, interconnected modules may provide a cost-efficient, safe way to keep people in orbit around the Earth, in a colony on the moon and on an inter-solar spacecraft carrying explorers to Mars.

A team of Embry-Riddle Aeronautical University faculty and graduate student researchers, led by Aerospace Engineering Professors Daewon Kim and Sirish Namilae, are helping NASA answer questions about the feasibility of humans living in these balloon-like structures beyond the Earth’s grasp.

Kim’s research has focused on developing and refining smart material sensors that are used to detect stress or damage in critical structures, such as automobile motors or the wings of aircraft. Namilae, working in the fields of solid mechanics and materials science, has worked for years with an exceptional material called carbon nanotubes.

These microscopic hollow tube-like structures of graphene (think pencil lead) have countless uses, everything from lightweight body armor to growing biological tissue to making the next generation of TV screens.

Now, Kim and Namilae are creating a new generation of sensors using a type of carbon nanotubes called buckypaper that is sensitive enough to detect the impact of even the smallest MMOD.

Carbon nanotubes, which are the main component of buckypaper, are 50,000 times thinner than a human hair and 500 times stronger than steel. With buckypaper, layers of nanotubes are loosely bonded to form a paper like thin sheet. “Buckypaper” owes its name to Buckminsterfullerene, a molecule composed of 60 carbon atoms shaped like the geodesic domes championed by architect and futurist Buckminster Fuller.

What if, Kim and Namilae wondered, thousands of these tiny sensors could be used to coat a large flexible membrane on, say, an inflatable habitat in space? They might more accurately monitor strain to the structure and pinpoint impacts from nearly invisible micrometeoroids.

“It was Sirish’s idea to use buckypaper,” Kim says. “And when we experimented with adding micrometer-sized graphite platelets to our original carbon nanotube/epoxy mix, it boosted the sensitivity of the sensors.”

Kim and Namilae – with colleagues at LUNA Innovations Inc., a leading fiber optics sensing company – were awarded a $125,000 Phase I grant in 2016 to begin work on two different sensor prototypes to enable structural “health monitoring” as well as impact detection for inflatable space habitats.

The expandable structure currently docked at the ISS, built by Bigelow Aerospace, is made of several sheets of flexible Kevlar-like materials with closed-cell vinyl polymer foam between the layers. In a configuration like this, the structural shell is expected to provide excellent MMOD impact and radiation protection, superior to existing metal structures in space.

LUNA began modifying their patented high-definition fiber optic strain sensors to be embedded into one of the multiple interior walls of a space module.

The Embry-Riddle researchers began work on their carbon nanotube sensors to cover multiple outer layers. NASA requested sensors that could detect and pinpoint the impact of MMOD up to 3 mm in diameter traveling up to 6 miles per second. Graduate students Jiukun Li and Sandeep Chava helped design, build and test the impact sensors. Two other grad students, Muhammad Anees and Audrey Gbaguidi, worked on space applications of the sensors.

In static tests, the team successfully demonstrated dynamic impact detection with the sensors. LUNA and the Embry-Riddle research team have now begun Phase II testing, having received an additional $750,000. Their goal this time is to increase the capabilities of the sensing technologies.

“Our biggest current challenge is embedding these smart sensors into a flexible and compliant material that can expand as the modules are inflated in space,” Kim says.

Namilae is also developing a computational modeling algorithm to gather data from the sensors when a MMOD impact occurs, including its severity and the exact location on the sensing layer.

Soon, a crucial test will happen at the University of Dayton Research Institute’s Hypervelocity Impact Facility: 3 mm projectiles will be fired at hypersonic speeds (3 to 5 miles per second) at the sensor array, which will be embedded in multiple impact-resistant layers separated by vinyl polymer foam – materials similar to what’s being used for the ISS module.

“We also have to show that our sensor materials are space-worthy and figure out how much power the sensor array will use,” Namilae says.

The ultimate goal is a possible Phase III grant to commercialize the sensor technology with NASA and NASA affiliates, but the research also offers more down-to-Earth benefits.

“We hope that our work will lead to applications of our sensors in space, but the thing I value most in this process is our students having an opportunity to learn and grow as scientists and create new knowledge,” says Namilae.