Using GPS, laser sensors and cameras, Embry-Riddle’s autonomous boat moved across a pond, identifying floating buoys of different colors and sizes while maneuvering through an aquatic obstacle course as part of the 11th International RoboBoat Competition, held this past weekend at Reed Canal Park in South Daytona, Florida. The competition was organized by the Association for Unmanned Vehicle Systems International’s (AUVSI) RoboNation and the Office of Naval Research.

The actions demonstrated by the boats during the competition were designed to mimic tasks being developed for full–sized, self–piloting sea craft in the future that would be used for coastal surveillance, port security and other types of oceanographic missions.

Earning their way to the finals, the Daytona Beach Campus team ultimately received $2,000 and placed fourth out of 13 teams that included universities from the Netherlands, Indonesia, India, Mexico and Canada.  Embry-Riddle’s team also received the Sportsmanship Award for the help they provided during the event such as sharing their machine shop facilities and 3D printers with other RoboBoat teams.

The 5 foot long, 80 pound, monohull vessel, named Double Precision, was designed and built from fiberglass and wood by student members of the Robotics Association of Embry–Riddle (RAER) especially for the RoboBoat competition. The boat utilized two electric thrusters for steering and forward propulsion, and a laser-based range finder, an optical camera and GPS to navigate the water course. 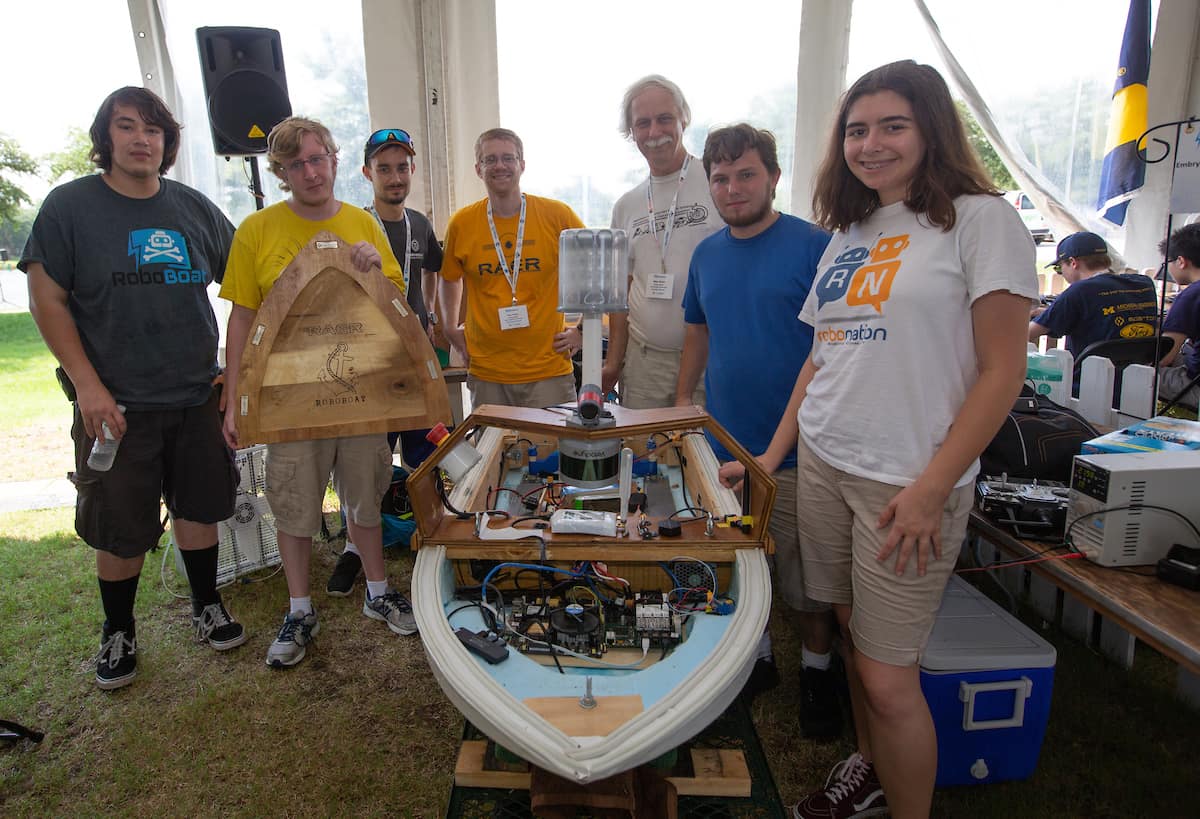 An autonomous, unmanned quadcopter carried on the watercraft was launched from the vessel to support the mission by recording images of the course, obstacles and challenges.

The competition was preceded by five days of practice and fine tuning of the sophisticated, computer–controlled boats.

“There’s a lot of work to be done to get the robotic boats up and running before the competition begins. It involves a lot of debugging,” said mechanical engineering master’s student James Hendrickson. “It’s a love/hate relationship. You hate it when it’s not working and the second it does work you absolutely love it.”

The Embry-Riddle team also included a member of the Daytona Beach Homeschoolers, Abby Butka, an incoming Embry-Riddle freshman. Her team last year won the international competition, beating nine teams from around the world.

Butka has been attending Embry-Riddle unmanned and autonomous aerial, water and ground vehicle competitions since she was 9 with her father, Brian Butka, an associate professor of electrical and computer engineering.

Faculty advisors for the team included Abby’s dad, Brian, and associate mechanical engineering professors Patrick Currier and Eric Coyle. Currier said they are extremely proud of the overall performance of the team, considering this group of students was pulled together quickly due to members of the team leaving for summer internships.

Being a part of the competition also gave the students a chance to meet the many industry sponsors.

“It’s great networking and connecting with companies who are out there working in the field,” said Nicholas Middlebrooks, a mechanical engineering master’s student.

More than a dozen RAER students worked on the Double Precision vessel in the past year. Students who participated in the RoboBoat competition, in addition to Butka, Hendrickson and Middlebrooks, included Kevin French, Stephen Cronin, Shaun McDonnell and Grady Delp.