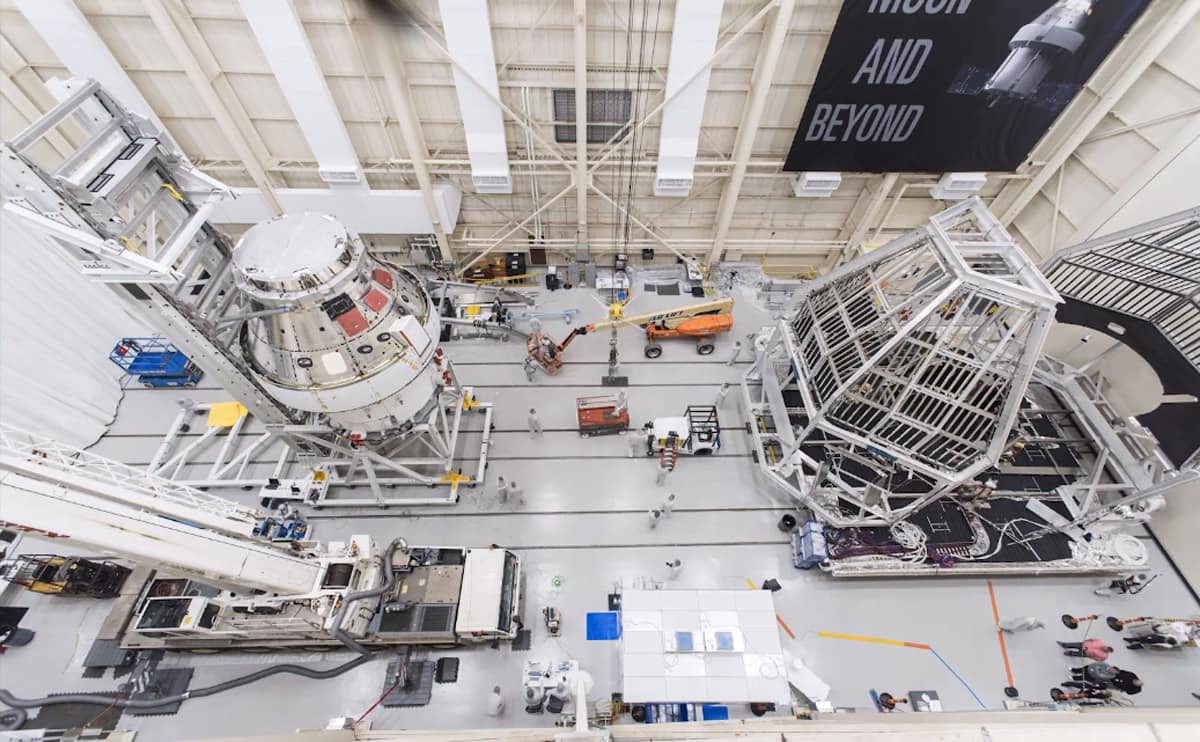 Recent news reports about NASA’s Orion spacecraft’s trip across the country highlighted the ride it took on the space agency’s Super Guppy – a feat that wouldn’t have been possible without the transportation systems an Embry-Riddle professor helped design.

Darris White, a professor of Mechanical Engineering, watched news coverage of the four-year project’s culmination on Nov. 24, 2019, when the systems he worked on at Lockheed Martin safely transported Orion from NASA’s Kennedy Space Center in Florida to the Glenn Research Center’s testing facility at Plum Brook Station in Ohio. White said the sabbatical he took to work as a senior structural engineer at Lockheed Martin gave him the opportunity to help develop a project that’s become a highlight of his career and now provides new context for students in his classes.

Watch the transportation in progress, in this time lapse video.

“In my more than 20 years of engineering I’ve designed many complicated systems, but the Orion transportation systems were by far the most complicated,” White said. “To see all of the different systems work perfectly on the first-ever attempt at transporting Orion provides a sense of satisfaction matched only by the engineering challenge.”

The Orion spacecraft is NASA’s deep-space exploration spacecraft that will carry astronauts from Earth to the Moon. Due to its size, the spacecraft, which was built by Lockheed Martin, had to be transported to Plum Brook Station by NASA’s oversized transport plane – the Super Guppy – for testing in the world’s largest vacuum chamber. After testing there, Orion will take another ride on the Super Guppy back to Florida for its future Artemis I mission aboard NASA’s Space Launch System rocket.

Planning for All Contingencies

The horizontal transporter system that White worked on at Lockheed Martin holds the spacecraft safely in the Super Guppy. Since the Super Guppy had never carried anything as heavy as Orion, the challenge involved creating the lightest possible structure that could handle the dynamic loading and transfer forces between the airplane and the spacecraft to ensure neither was overloaded.

“We had to plan for every contingency,” White said.

To fit Orion into the airplane, a system had to be designed to safely move and support the spacecraft from its vertical orientation to horizontal. This was among the many challenges the transportation system had to account for because Orion was not designed to withstand significant horizontal loads, White said. “I checked and rechecked the kinematic and dynamic analysis of this process many times.”

Soon after returning to Embry-Riddle from his nine-month sabbatical in 2017, White wasn’t quite ready to leave the project with Lockheed Martin. He commuted twice a week from Embry-Riddle in Daytona Beach, Fla., to Kennedy Space Center for another 18 months to contribute to the project part-time. The extended exchange with industry brought him up to speed on real world applications and techniques to apply in courses such as vibrations, vehicle dynamics, senior design, and in student projects.

Vibrations were a major constraint for the project. “It was important that the natural frequency of the transportation system did not align the Super Guppy’s natural frequencies,” said White, who worked with Lockheed Martin engineers to ensure the two systems worked together.

White now teaches his students some of the modeling techniques he learned as part of this process.

After the Super Guppy landed at Mansfield Lahm Airport in Ohio, Orion had to be moved from the plane onto a semi-truck for highway transportation. It was yet another engineering challenge for White. Orion’s high center of gravity made it susceptible to rollover. He calculated the maximum safe speed the vehicle could travel on the specific route and that analysis is among the examples he covers in his vehicle dynamics classes.

“Having the opportunity to work closely with structural engineers at Lockheed Martin and NASA also gave me a window into their standards and approach for finite element methods,” White said. “I have worked with our senior design students to apply these approaches to better prepare them for industry.”

The connections he made at Lockheed Martin have also benefitted students’ careers. White recently helped two of them secure internships there, which eventually led to job offers.

Following completion of the design review, White passed the torch to his colleague, Victor Huayamave, an assistant professor of Mechanical Engineering, who supported Lockheed Martin part-time during the final stages of the project in 2018 and 2019. Huayamave worked on the manufacturing process for the transportation system and mentored some of the junior engineers on developing analysis protocols using finite element analysis and structural engineering.

“It was a great hands-on experience and will enable us to share everything we learned in the classroom with our students,” said Huayamave, a structural engineer on the project. “The opportunity has not only opened the door to faculty, but also to our students. Currently one of our alumni is working full time as a mechanical engineer with the same group.”