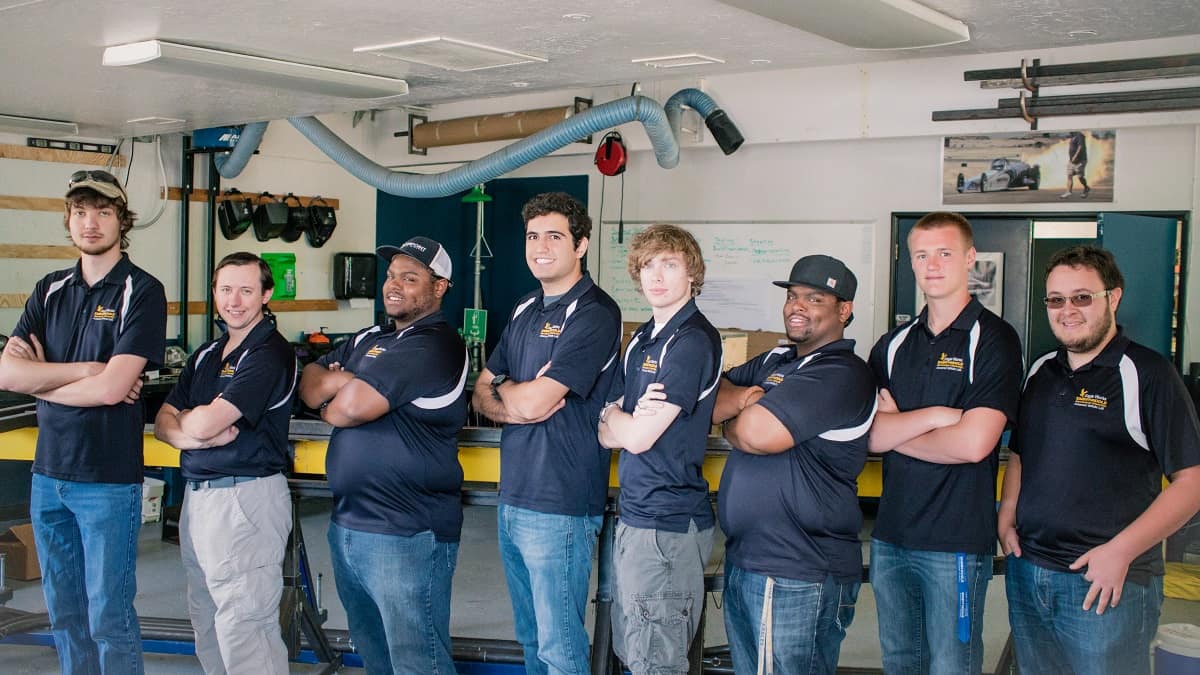 Students of Embry-Riddle Aeronautical University are well known for their professional and academic ambitions. Year after year, decade after decade, students, graduates, and alumni are at the forefront of industry breakthroughs and monumental achievements within their fields of expertise. It should come as no surprise that Embry-Riddle students are continuously innovating and improving on what has come before. This year, Embry-Riddle Prescott campus' Eagle Works team will continue this tradition by attempting to break yet another incredible record.

The Eagle Works team has set their sights on setting a new record in electric land vehicle speeds, making their goal to achieve 250 miles per hour with a completely electrical-powered car and leaving the current 213 miles per hour record, set in 1997 by Ed Ranneberg, in the dust.

"Eagle Works was created with one sole purpose in mind: to go as fast as possible," said Eagle Works President Reece Ticotin. As the team of students begins the fall semester, they have already come a long way in achieving that goal after their work on the project over the summer months.

The team began in 2007 as the Jet Dragster Project, which at the time manufactured the only student built and student designed jet dragster in the world. Yet in 2014 the Jet Dragster Project came to a conclusion, heralding a new era of progress and determination in the form of Eagle Works, a team which today is comprised of around 20 members—each of which contribute an elite skillset for the purpose of designing, building, testing, and racing an E2 Class electric land speed car.

To prove its electric land speed car design as the world's fastest electric car, Eagle Works aims to have their vehicle ready in time to compete in the 70thAnnual Speed Week event in Bonneville Salt Flats, Utah next year—August 2018. The venue and location are significant, as Bonneville is world renowned for being where land speed records are forged, and shattered.

Building a fully electric land speed vehicle capable of setting a new record is not without its difficulties, however. One such challenge has been the trial-and-error nature of designing, testing, and re-designing essential vehicle systems.

"The team went into this project with very little knowledge of automotive design," said Ticotin. "Because of this, many systems have had to be re-designed since the team's beginning in Fall 2014. While this can be frustrating, and can set back the progress of this project, it is all part of the learning process—and will better prepare Eagle Works members for their careers post-graduation."

Despite these trials, Eagle Works has been making impressive strides and garnering significant attention from industry professionals, including official club supporter ANSYS, Inc., an American computer-aided engineering software developer that has taken an interest in Eagle Works' electrical engineering efforts. The team has been using ANSYS' high-powered simulation software every day in order to help make their vehicle's design, and their dream of record-breaking speeds, a reality.

Though the amount of hard work and effort the Eagle Works team is expecting to put into making a world-class electric car has been and will continue to be a herculean undertaking, the team is excited at the possibilities and the potential. With a whole year separating the team from their goal, the entire team agrees that the challenge is what makes the project ultimately so rewarding.

"The entire team puts in hundreds of hours each year," said Ticotin. "When all that hard work pays off, there will be no greater feeling."