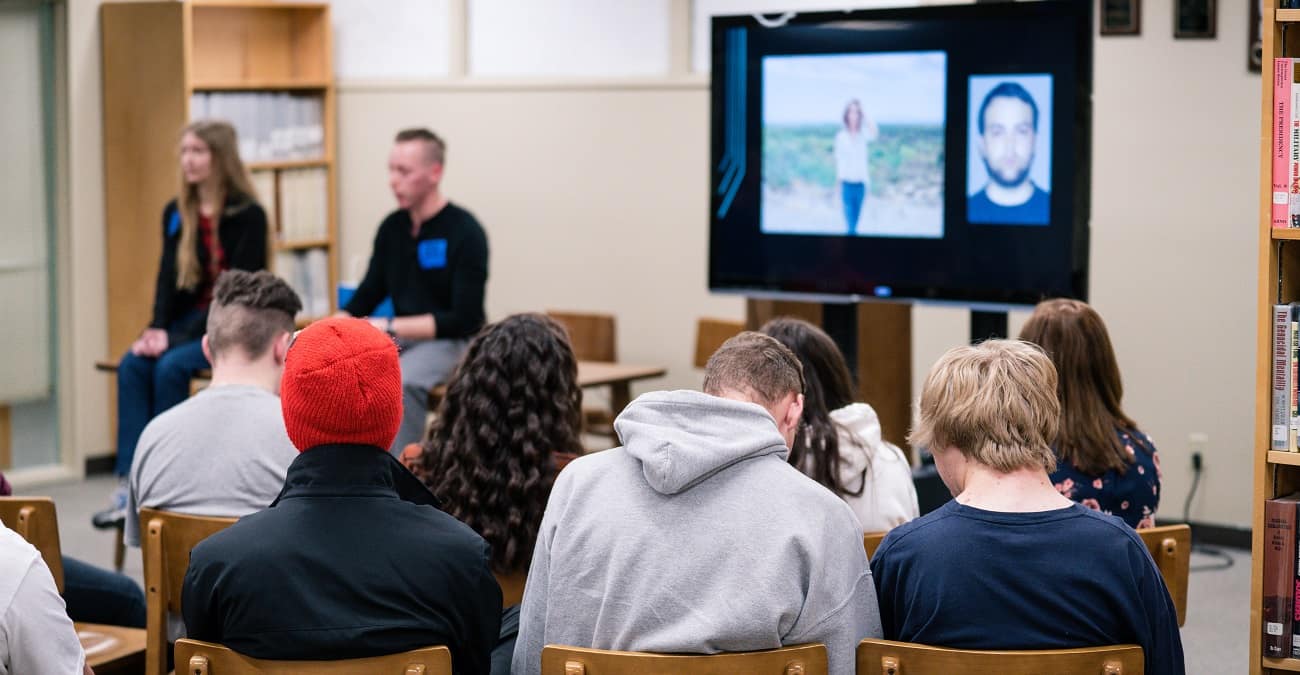 Embry-Riddle Prescott campus’ College of Security and Intelligence (CSI) students have completed a three-semester capstone project aimed at curbing the negative effects of social media among teens. The project, Mitigating the Effects of Social Media on Adolescents, focuses on orchestrating a change in the current social norms regarding teens and social media, and how that information is taught in schools.

The CSI students suggest that people, and young people in particular, are targets for cyberbullying, sextortion, homegrown terrorism and hoaxes. There are existing programs that aim to address social media risks, but Embry-Riddle students believed they could develop a program that focuses on preventative measures to keep teens from making decisions on social media that could lead to extortion.

“The research we conducted serves everyone’s interest,” said Global Security and Intelligence Studies (GSIS) student Ibrahim S. Alderei, who was among the seniors who developed the capstone project. “Most people have access to social media, or at least have someone they care about that does. The program aims to protect users and guide them to the proper use of social media.”

Cyberbullying is known as the use of electronic communication to intimidate an individual, typically by sending messages of a threatening nature, and has been identified as an issue of growing concern among parents and teachers for the past several years. Sexting—the act of sending others sexually explicit photographs or messages via mobile phone—has been a growing and socially acceptable trend among many teens and older pre-teens in recent years. This prevalence of sexually explicit photos and videos has given rise to sextortion, sexual exploitation or blackmail to extort favors, images, money, or information from victims.

“There is a reason why students are unresponsive when someone states they are going to talk about cyberbullying or sexting,” explained CSI student and project participant Madison Landry. “It’s because they have heard it a million times in ways that don’t work. This program taught the material in a different way that made students listen, hear, and implement.”

Instead of a ‘top-down’ educational method where adults inform teens about the potential dangers associated with social media, the Embry-Riddle CSI project suggests that a ‘bottom-up’ approach might prove more effective. The project was developed with the intention of helping schools collect information necessary to understand and to design an educational program that would help students understand and recognize the threat of social media attacks. The education ERAU students facilitated was part of a bigger picture of helping schools understand the issues.

“Using college students who can better identify with teens and educate them provides a means of reaching them in a way that proves extremely difficult for school teachers and administrators,” said Associate Professor of Security and Intelligence, Dr. Tyrone Groh.

Each semester focused on a different part of the program. The first semester determined there was a significant connection between social media and violence, and CSI students recommended an education program as a way to combat this. During the second semester, an education program was created that targeted negative social media behavior of children from fifth to twelfth grade. The third semester tested and implemented the program in local schools.

"The presentation done by the students of Embry-Riddle was remarkable," said Prescott High School Principal Stephanie Hillig. "They educated not only the students on the positives and negatives of social media, but the staff and parents as well. This program, when fully implemented, will set an educational foundation of appropriate protocols for social media use."

“We utilized a variety of tested techniques to ensure that our message resonated with the students,” Landry explained. “We had our ERAU students talk to the kids, because they are more likely to listen and identify with someone closer to their own age. We didn’t talk down to them. Anytime we talked about them, we included ourselves.”

The main theme of the education is to force teens to confront the reality of social media—something that can be psychologically difficult considering the way social media can insulate users from the emotional effects words or actions have on others.

“The change needed to be comprehensive,” said Alderei. “Change adolescent norms, have an informed and educated school administration, and have flexibility toward adolescent’s needs. The students absorbed the information we provided. They were engaged with us and there was a majority agreement on what we proposed. After presenting to the students, I felt that we did educate them on the effects certain behaviors on social media can produce.”