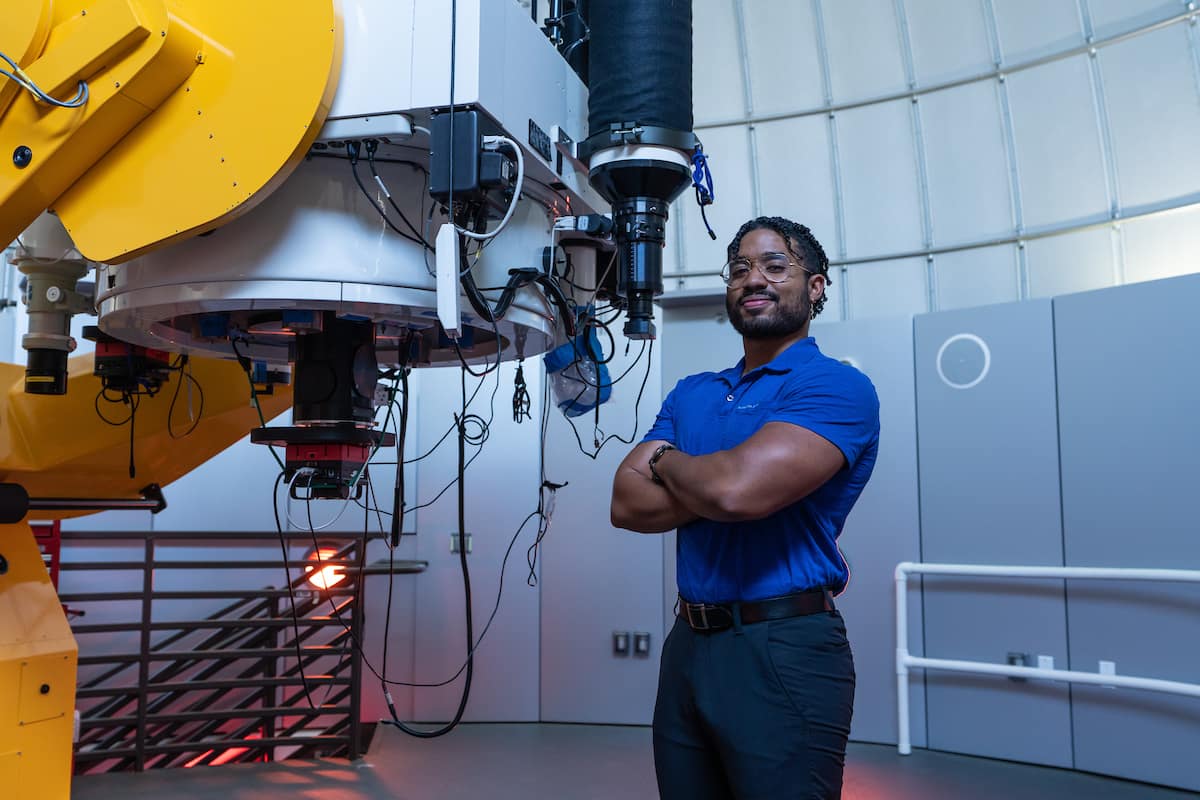 As a first-generation college student, everything about the process of embarking on the journey of higher education was “absolutely terrifying” to Giovanni Bacon.

“Everything past the application process was new ground and experiences no one in my family knew how to help me with,” he said.

But he powered through the fear, submitted his application, got accepted and, now, is set to earn his degree in Astronomy and Astrophysics at Embry-Riddle Aeronautical University’s spring 2022 commencement ceremony this month.

“It feels exhilarating, as if I am the pioneer of my family, paving the road for my younger cousins to shine,” he said. “One of the most rewarding aspects is being able to help my younger cousins achieve goals my family once believed were not possible for people like us, Afro-Latinos.”

Bacon was also recently awarded a National Science Foundation (NSF) Graduate Research Fellowship, which will cover all of his graduate school tuition and provide him with a $34,000 annual stipend for three years.

The NSF fellowship supports students who are anticipated to contribute significant research, teaching and innovations to the fields of science and engineering. In part, Bacon stood out among his peers to earn the fellowship during his time interning at the NASA Goddard Space Flight Center, where he participated in a multi-year study of the lunar exosphere. In his final year, he noticed a small error in the algorithm that was having major impacts on his team’s research results. So, he got to work: He presented evidence to the team that highlighted the issue and proposed a viable solution, which ultimately led to his first publication and an opportunity to present the project at a NASA-affiliated conference.

“This experience has taught me the true benefit of not giving up,” said the Miami, Florida, native. “From every mistake, there is always a lesson to learn and an avenue for growth.”

Bacon also interned at Kennedy Space Center and worked on the SOFIA (Stratospheric Observatory for Infrared Astronomy) project, studying supermassive star-forming regions. He is an Office of Undergraduate Research ambassador, has served as flight director for multiple weather balloon projects and has participated in a variety of undergraduate research projects during his time at Embry-Riddle’s Daytona Beach Campus.

“Giovanni was a natural leader in my research group and always helped new students get up to speed,” said Dr. Ashley Kehoe, assistant professor of Astronomy, whom Bacon worked with on a team that modeled the orbital evolution of fragments released in an asteroid disruption. Big picture: This process uses infrared satellite data to understand what proportion of our solar system debris disk originated from asteroids. “He also spearheaded our group presentation at last year’s Discovery Day, which won the People’s Choice Award.”

“Giovanni’s ability to find new opportunities to broaden his education continues to amaze me,” added Dr. Edwin Mierkiewicz, associate professor of Physics. “From NASA Goddard to SOFIA, he is clearly able to navigate his way to success, and his success is no accident.”

Next, Bacon will head to Purdue University to begin his doctoral program, studying Earth, Atmospheric and Planetary Science. His dream is to become an astronaut scientist, studying planetary and exoplanetary atmospheres and/or astrobiology.

His career ambitions are lofty, residing among the stars. His personal mission, however, is much more local.

“I believe what led to me being considered for the NSF fellowship was my portrayal of perseverance, dedication and, most important, my willingness to use my work to uplift not just the science field but the communities around me,” he said. “That is my main accomplishment.”